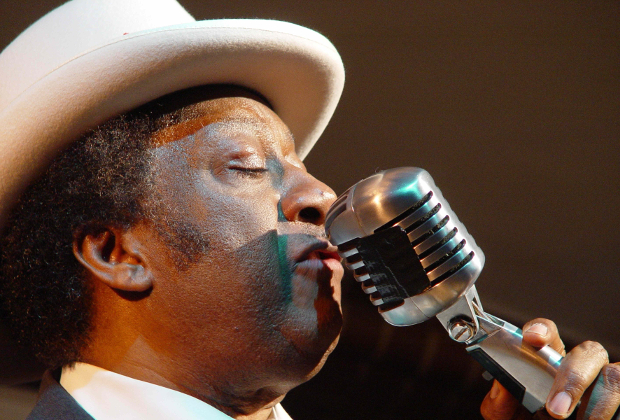 In Cold War Berlin, Arkansas-born musician and military communications officer Ebylee “Eb” Davis was sent on special expeditions behind the Wall. His mission? To bring East Berliners the blues.

Davis’ unique story is told in the new documentary How Berlin Got The Blues. Victoria Luther’s film sees its European premiere at Babylon on October 12, followed by a concert from the man himself, now 73 and performing with his “Superband”. The singer sat down with us at his house in Zehlendorf where he lives with his German wife Nina, a blues pianist herself.

How did you get into the blues?

The first time I heard blues, it was back home in Arkansas. I was maybe six or seven years old. There was a guy living next door to us. He was a guitar player, singer. I’d come home from school and he’d be sitting out there playing, singing… I went to the house and asked my mother what he was playing because I’d only ever heard gospel or country music, and it didn’t touch me like what he was doing. She said, “Well, that’s blues, you stay away from that.”

What was it that touched you so much?

The church was singing about the pie in the sky, and this guy was singing, you know, the pie in the sky is good, but I want a piece of pie now, with some ice cream on top of it. That got me more. And then I moved to Memphis, and there were guys like BB King just hanging around… There was another guy who was a preacher, but a blues singer at night. One time I told him, “I’ve been taught that you can’t serve on both sides.” And he said, “Boy, let me tell you something. There is no big difference between gospel and the blues, only the words.” The preacher gets up and says “Oh God.” Then when you’re singing the blues it’s “Oh baby.” It’s the same thing. It’s the yearning.

But then you joined the army, at 16, even lying about your age to get in. How come?

Back then you’d get drafted, and then you had no choice, they just put you somewhere. If you volunteered, though, they gave you some choices. So I chose New Mexico, and I did music at the same time – I had a band in the army. When I finished with those three years, I went back to Memphis and went full time with the music. There was a record producer who took me to New York. I put together a band there, The Soul Groovers – we were the house band at his club in Brooklyn for quite a while. But then came the disco boom, and that put us out of work. All the people said, “Why should I pay all this money for a band when I can pay one guy just to stand there?” Disco killed live music. So I went back into the military.

And that’s when you got sent to West Berlin…

I didn’t want to come to Berlin! I wanted to go into southern Germany! I said, it’s a divided city, behind the Wall and all that stuff. But they said, who asked you?

What did you do here, officially?

I got hired by this unit called the United States Liaison Mission. It was an interesting unit because it was the only unit where the military could cross over the Glienicke Bridge, now called the Bridge of Spies [between the American Sector in Wannsee and Potsdam in East Germany]. We had what’s called a safe house there in the East – the Russians had theirs in West Germany. I was just working as a reports civilian. The guys would go out and get the information, and I would be one of the people who would type it up. We had one guy review it, then it would be transferred over to Langley, to DC.

What was it like to be an African American in Berlin at the time?

It was fantastic! When I first came I met a lot of older people, older Germans, and they would explain the love that they had for black Americans. Back when they were kids the city was totally destroyed and they had nothing, so they’d go up to the US military compounds to see if they could get something. They said only the black guys would give them food – the white guys would chase them away, throw rocks at them. But that was back then. Of course, the younger ones don’t remember anything like that today.

Yeah it was a nine-piece with horns and stuff like that. The bandleader made yearly trips to New Orleans… they’d done their homework! I sat in with them one night, and after that he said, “We’ve been looking for someone like you.” So I started doing the military thing by day and working the West Berlin club circuit at night. The majority of the people at the shows were Germans and for a lot of them it was just curiosity, to see a black American doing blues.

Whose idea was it to send you to East Germany?

I was approached by the State Department, but who exactly invited me, I don’t know. They just said, we notice you speak pretty good, so we would like you to go to some of the universities and give speeches about American culture and stuff like that, and then you play a little bit of music after. The first one I did was at a university in Halle. Did something at Humboldt, in Leipzig as well. Days before the Wall came down, I was playing at Palast der Republik.

Did you know you were being used as a political tool?

I knew why I was sent there. They were all told, ‘America is this, America is that, black people are still slaves.’ I was used to counteract that.

I knew why I was sent there. They were all told, “America is this, America is that, black people are still slaves.” I was used to counteract that. I told my boss, “Sir, if you think that I’m smart enough that you put me in this job, don’t you think I’m also smart enough to figure out why y’all sending me all over the East?” He said, “Well, you know, my orders come from above, too.” But for me it was okay. It was exciting.

So was it okay with the East Germans for you to cross over to play?

I couldn’t just say “I’m going over.” It had to be approved, of course. When I went over to a gig I always had to have one American and two Russian escorts. They would stay there the whole time, and when the gig was over they would escort me back to the border to make sure I stepped over the line without speaking to anybody.

Some of them did. But you couldn’t really tell because there would be some head sergeant or something standing in front, and when you finished a song the guy would go like this [lifts up hands] and then like this [brings hands down]. Then you’d play the next song. They were told when to applaud. The guy would give the applause signal.

What happened to your unit after the Wall came down?

Well, they didn’t have any use for us anymore, so they were giving people money to leave. They called me into the office and asked me, “Do you want to take your chance and stay in, or take the money and run? If you stay in, we might throw you out anyway.” I said, “Okay, I like money.”

Why did you decide to stay in Berlin?

I was quite established in the music scene here. Plus, I was getting a lot of offers from Switzerland, Sweden, France, Spain… I thought I could always go back once a year for a gig in the US, and that’s what we normally do now. But Berlin is the home base. In the United States they don’t see blues as an art form; here, they do.