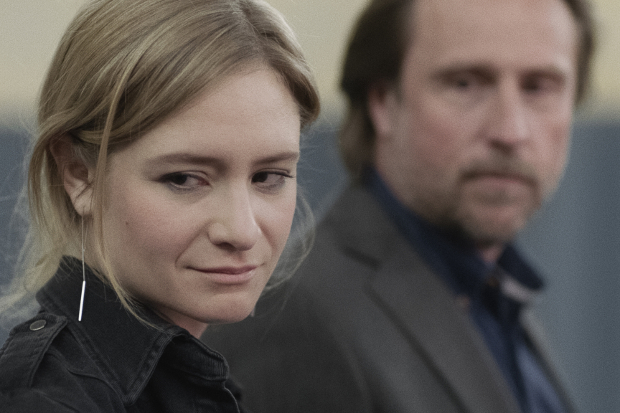 Some films are not just bad, they’re achingly bad. And a terrible ache is what I felt leaving the screening of the Berlinale’s only German film in competition, an unsubtle abortion drama with arguably laudable (empowering, feminist) intentions but more crafted to suit cable TV than an A-list festival. 24 Wochen is painfully emblematic of current German film – ticking every box of why most of this country’s cinema sucks.

Astrid is a six-month pregnant successful standup comedian happily living with boyfriend/manager, Markus, and their young daughter. But happiness and her career are jeopardised when the fetus is diagnosed with Down’s syndrome and heart problems. An agonising dilemma ensues: to keep or not to keep the child and at what price? In the wording of the press text. “Ultimately, only she who is bearing the child can make this weighty decision.” Alas, what weighs here is the heavy-handed filmmaking .

In fact, Anne Zohra Berrached ‘s film displays every symptom of the great German film disease, as diagnosed in our February issue: 1) It’s hot-button-issue-driven. You can just imagine how they pitched the film to co-producer ZDF: “Achtung: serious topic!” And it’s all here: the moral dilemma, the ups and downs between the couple, the technical conversations with (real-life) doctors, even a soul-searching church scene (really!). 2) A stifling sense of ‘psychological realism’. You’re not spared a step in the emotional progression of main character Astrid: from marital solidarity in the face of adversity to first doubts to her final gut decision – sold to us as a courageous act of feminist self-assertion in a judgmental society. No subtext, no subtlety, it’s all rubbed in your face, complete with dialogue about fate (the word Schicksal comes up too many times for the film’s own good) and “eloquent” close-ups to boot. 3) Then we have the standardised aesthetics: Why are German “arthouse” dramas always bathed in that austere cold light where the hues might range from blue to green but never really leave the grey palette? And what about that cheesy split-screen reflection-in-the window shot with that unmistakable sense of symmetry? Do they learn that in school? Do they all use the same cameramen? One glance and you immediately recognise the Made in Deutschland production values. 4) And of course, who puts serious money into German ‘arthouse’ without a reliably famous cast – and Jentsch fits the bill with a role scripted as award-winning material. Her name is already being thrown around as a candidate for Best Actress!

24 Wochen tries hard (too hard) to out a taboo: did you know that nine out of 10 women pregnant with a handicapped kid choose to abort, some as late as their seventh month (hence the 24 weeks reference)? The message is hammered home: they shouldn’t be ashamed of it! Alas, the road to movie hell is paved with good intentions. Of course the topic is interesting and the message laudable, but where’s the cinema? Why not make a good documentary instead? For anyone who believes in the power of film to surprise, challenge or even transform  – as one panelist said at Critics’ Week on Saturday, in its power to “change you a tiny bit from the person you were when you entered the movie theatre” – this film will ache.