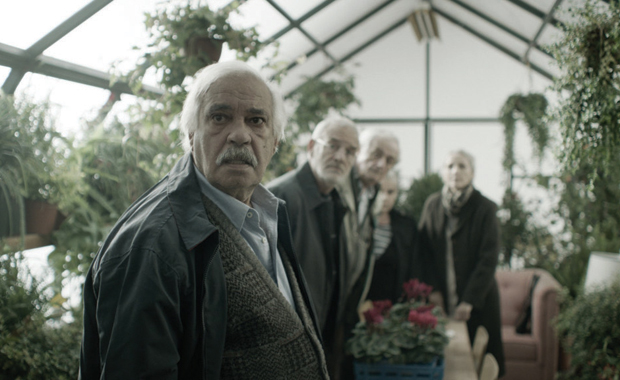 In the tragicomedy The Farewell Party, Israeli writing/directing duo Tal Granit and Sharon Maymon devised up a “mercy-killing machine” to deal with euthanasia.

The story revolves around a sweet, kind band of 70-year-old killers living in a senior housing community who, after helping a friend with terminal illness end his painful and undignified existence via a self-built machine, are confronted with ever more moral and emotional dilemmas as word gets out and requests for their service rush in.

Is any aspect of your film based on real-life events or experiences?

SHARON MAYMON: The idea of the film came from the death of Helga, the grandmother of my ex-boyfriend. She died at the age of 80 from cancer. We were there the day she died and saw how death released her from pain and suffering. But then the paramedics came into the room and, for half an hour, tried to bring her back to life. It felt so absurd. From that moment of absurdity came the idea of the film.

What made you decide to employ comedic elements in a film about assisted suicide?

TAL GRANIT: Sharon and I had directed short films together before and in most of them we approached heavy social subjects with humour. We found that it’s a powerful tool to open the hearts of the audience while talking about very difficult issues.

SM: And it was not just a scriptwriting decision, either. We also cast comedians for the film. All the actors in this film are well-known comedians in Israel from the 1970s. We knew that if we cast these people, they would bring the humour, the right comedic timing with them.

And how did you make sure the comedy works – that it’s funny but, in view of the context, not insensitive?

SM: It’s very hard. We had lots of arguments. We would argue about one word in a sentence for a whole week. We knew that we had to stay very sharp in order to strike the right balance. It’s certainly a risky thing to do, but if you’re not taking risks when you make a film, it’s boring.

Have you noticed different reactions to the film in different countries?

SM: I’ve noticed that in countries where euthanasia is legal, people are more interested to know how it is in Israel. But ultimately this movie is about feelings, love and separation. So I think it’s the same everywhere.

TG: Also, wherever we travel with this movie, there’s always someone in the audience who wants to know if we kept the “mercy-killing machine”. It seems that, across cultures and borders, everyone is secretly hoping to have such a machine – just in case.

Speaking of the mercy-killing machine, where did you get the idea for that?

SM: It all started when the characters wanted to put their friend Max out of his misery but realised that they couldn’t do it themselves. Because we wanted to add a light touch to the design of the machine, we used the Shabbat timer and the bicycle chains. We knew the apparatuses that Dr. [Jack] Kevorkian and Dr. [Philip] Nitschke used, and ours is a combination of those two and some humour.

Your movie features an entire cast of senior performers, which doesn’t happen that often.

SM: I actually think that these days, there are quite many movies with senior casts, like The Best Exotic Marigold Hotel parts I and II, Quartett, etc. – and they’re all blockbusters! Now Hollywood finally figured out only pensioners go to the cinemas anymore. [Laughs] Actually, we’d worked with the main actor Ze’ev Revach on a short film 11 years ago. We wrote this role specifically for him. It’s the same with lead actress Levana Finkelstein, who I’d also worked with before. We didn’t think about their age.

The Farewell Party opens in Berlin cinemas on September 24. Check our OV search engine for showtimes.