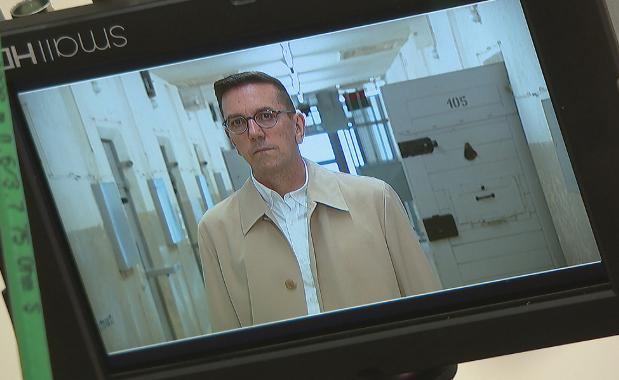 Gay, conservative and embroiled in international politics, The GDR Complex offers an intimate portrait of a complex man. Join us at the next EXBlicks on Nov 7 at Lichtblick Kino.

Director Jochen Hick’s (The Good American, Out In East Berlin) latest documentary offers a compelling portrait Mario Röllig, a gay ex-GDR citizen whose affair with a West German politician and failed escape-attempt landed him three months in the Stasi’s infamous Hohenschönhausen prison. Twenty-five years on, Röllig is a CDU member touring around Germany and overseas giving educational talks about his experiences then and since. Hick, however, sees the whole affair as much more nuanced. Explore in depth (with Hick on hand) at our next instalment of EXBlicks on Monday, November 7, 8:30pm at Lichtblick Kino.

How did you come across Mario Röllig and his story?

I came across Mario when we made Out in East Berlin. He could have been one of the protagonists in that film but his story was so partcular and complex and dramatic, that I decided to keep it for later. And I did make a promise to Röllig that I would make a film with and about him. I knew it wouldn’t be an easy film but it was very much about trust. I told him I’d always be there and that he could be certain that if there’s something he didn’t want to show, we wouldn’t show it – for example he didn’t want us to contact his old lover in West Berlin and so we didn’t.

A lot of critics have praised The GDR Complex for your unheroic depiction of Röllig. Was this element of his character something that drew you to him?

I don’t he ever thought of himself as a hero. Everything just happened to him, he was never very political in the GDR – he just ran into it because he fell in love with this guy from West Berlin and he fell for this western lifestyle. At some point, because they [the Stasi] were always after him it became unbearable and he decided to leave but failed. I think his escape wasn’t well planned, as he explains in the film. He also admits that he was no hero while he was in prison, he gave some information about some people which he shouldn’t have done, which he also mentions in the film. So I don’t see him as a hero but as a very impressive character because he continually deals with a topic that I think others would just leave behind, and it’s important that someone talks about it.

I saw early on that Röllig was quite conservative and not really an intellectual, so what interested me is how do other people react to it? Do they criticise his way of looking at the GDR, his current way of life and our capitalist lifestyle?  What’s also interesting is that Röllig will say things – criticisms of the GDR – that will make other people unhappy or uncomfortable, often because of their leftist political leanings or because they experienced the GDR differently. Sometimes you meet people — like at the reunion with Egon Krenz [the last General Secretary of the GDR] in the Junge Welt Buchladen, who have a very different view and show no compassion [for Röllig and others who were persecuted], or even attack him. I can understand why he gets on people’s nerves: he’s built his political worldview out of his personal experience – basically a questionable unadultered love for the capitalistic system.

Yes, and they’re all fighting against each other. People on the left in the film don’t really talk about the GDR. Either they’re too young and they didn’t really experience it, or they just know that they wouldn’t be heard because the general and current media view of the GDR is that it was a dictatorship. But the main issue of the film is: how do people talk about the GDR 25 years since it’s collapsed? We’ve had a lot of films that were either very anti-GDR, or very nostalgic films – mostly unpolitical. There have been hundreds of victim films and now no one wants to watch another victim film. The interesting thing about Röllig is that he was only incarcerated for three months and although it [the persecution he experienced in the GDR] still plays a big role his life, he hasn’t let it take over, he’s found his way of dealing with it. Unlike people who spent say, eight years in Bautzen [prison] and were completely broken by the experience.

Were you ever concerned that the film would be too sympathetic to Röllig, or that it might become too much of a victim film?

No. But you can see from the reviews that the film is interpreted in many different ways, for example the Tagesspiegel read it more as a victim story whereas the Berliner Zeitung found it much more ambivalent and I think it’s a very ambivalent story. The story is also about what it means to be an eyewitness, what it means to repeat your story all the time – does he just keep repeating the same sentences and allow it to become formulaic? Also, as an eyewitness who used to work as a waiter in Schönefeld Airport and is now talking to the former president of Saxony, he has made its way up the social ladder – Röllig has won a lot with his story – not that he calculated it. We tried to make the historical and tragic parts very short and just concentrated on observing how people react and interact with Röllig and his story. For example we obserevd some envy on the part of other eyewitnesses who didn’t do the same thing with their lives – you see them asking themselves why they aren’t being invited to Charlotte, USA to talk at the university there.

Do you disagree with the idea that the eyewitness is the enemy of the historian?

I would say there’s the eyewitness and there’s the historian and both have their importance. What one of the teachers says in the film – that the biggest enemy of the historian is the eyewitness – is referring to an educational policy in Germany (the so-called “Beutelsbacher Konsens”) that in school eyewitnesses shoudn’t overwhelm students with their subjective accounts, education had to be based on facts instead.

There should be a balance between factual information and eyewitness accounts and I think Röllig is an interesting case: he’s not overwhelming you with emotions – he doesn’t cry like some do when telling his stories. On the other hand, he’s completely caught in his own story, it’s influenced his whole life and continues to influence it in every way.

What does the title of the film mean for you?

I’m interested in our relationship with the heritage of the GDR, because I’m a director from West Germany and I haven’t experienced the GDR apart from a couple of times on visits, which were really, really short. Our relationship with East Germany is a big complex for all of Germany and it’s something that we are increasingly interested in. Unfortunately, a lot of what we see on TV is very superficial, there’s so much more to explore and to hear from people about what they really thought about the political system… and it’s all ignored. Of course there’s the psychological complex, the title hints at both meanings of the term.

Would you say the The GDR Complex goes a step further compared to Out in East Berlin – it challenges taboos by showing a more ambivalent view on the GDR past?

Out in East Berlin has more to with how a sexual minority survives in a repressive and, on the other hand, not-so-repressive system. The film was a bit of a time capsule because it ends in 1989-90, whereas Röllig’s story goes on beyond that. It also challenges the way we’re looking back at that history – or the way people refuse to look back at it – even die Linke is not doing it! There’s still a blindspot and there’s something very disrespectful about that. I think it is deeply wrong the way we deal with our history. That’s why there are still these taboos. That’s why you see people in these strange meetings with Krenz – it was like a discussion on the moon! So, for me it was important when making the film that both left-leaning and conservative people would be able to tell their own narratives and some of the flaws in those narratives be reflected in the film – and maybe, through that, they would better understand the opposing views.