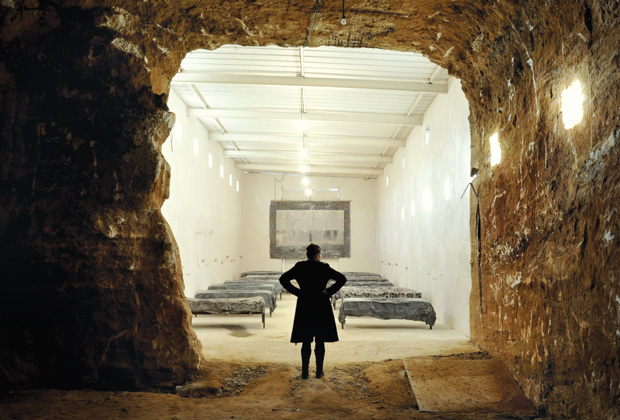 The German painter and sculptor Anselm Kiefer left Germany in 1993 and moved to La Ribaute, a dilapidated former silk factory near Barjac in the south of France. By the time he left the place, 15 years later, he had turned the 35-hectare estate in an astounding Gesamtkunstwerk – labyrinths of tunnels, excavated amphitheatres, desolate pavilions, each scattered with the ashen, fossilized remnants of a nameless civilisation, a haunting artist’s testimony to an unnamed holocaust.

Sophie Fiennes (sister of Ralph and Joseph) took her camera to La Ribaute. The result is Over Your Cities Grass Will Grow, an exceptional work of art in its own right, offering a breathtaking journey through a world few will ever be able to visit.

Your film feels like a real journey, much more than a simple excursion. Was that your intention?

You can’t walk through La Ribaute, and that was precisely my reason for filming it. It was more the idea of flying through it, or being disembodied within it. Rather than to create something that tries to approximate [being there], I thought I would just go in another direction, a kind of disembodied experience – move through it in ways that you couldn’t if you went there.

Also, the absence of people and the absence of Kiefer is important in the way that the travelling sequences are shot. Because the one ‘narrative twist’ is that by the end of the film you realise he’s left this place. His leaving suggests his death and what he’s leaving behind are these spaces.

Representing space through film has a long tradition in cinema. Did you take inspiration from other directors?

It’s an ongoing fascination for me, the relationship between space and cinema. You can recreate space in the mind of the viewer – you can actually place people into spaces in their minds by playing with the grammar of filmmaking.

The way Ozu filmed Japanese interiors really struck me. There’s also the kind of elements of choreography that have to do with rhythm in space – Leni Riefenstahl is amazing for the sense of rhythm she creates in the editing of her material.

Last Year at Marienbad was actually a point of discussion between Anselm and myself, because of the way Resnais was relating to the location and making it a protagonist – like Antonioni; the location is a presence itself, as much as human beings might be.

The way the film progresses from confined spaces to sprawling panoramic shots conveys an almost positive feeling; despite the images of desolation, you leave the film on a positive note.

The ending is positive in the way I felt when I went to Pompeii. After the catastrophe, everything is over: the pain is finished, the agony, the terror, the moment of destruction has ended… there’s an amazing stillness, and in that sense it’s positive – there’s catharsis in that.

Do you see ‘positivity’ in Kiefer’s work?

There’s an ambivalent feeling about positivity in Kiefer. One of my favourite shots in the film is when the camera is going up the staircase that suddenly stops and doesn’t go anywhere. This idea of going up to some positive outcome, to some place of absolute understanding, that doesn’t happen… Those things don’t happen, in that sense [Kiefer] would say nothing changes. Destruction and creation are flipsides of the same thing for him.

Some critics took issue with the fact that your film doesn’t consider the controversies surrounding his art.

The controversy occurred around his earlier work, which was specifically about Germany. The BBC made a film that examined that, so that film’s already been made. You can’t just keep asking him if he’s a Nazi; it’s a stupid thing to suggest.

It’s the generation that discovered the recent history of Germany and examined what that meant for them. There’s nothing actually directly controversial about what he’s built at La Ribaute. This is a document of what he’s doing here now, and I don’t see anything inherently controversial in what he’s created here.