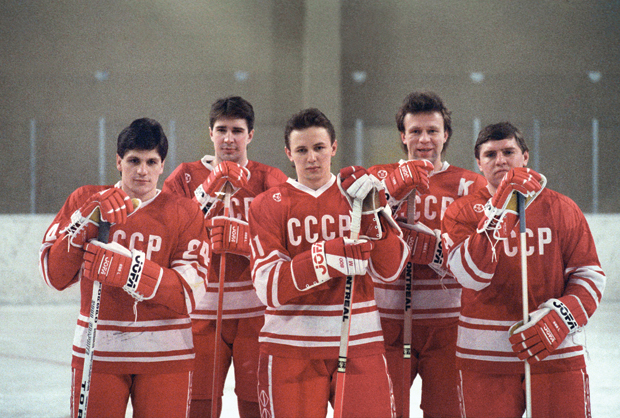 With tensions high between Russia and the West, Polsky’s film on Soviet ice hockey defenceman Fetisov (photo, second from right) seems hand-made to show how the mindset that once created the all-but-invincible “Red Army” team continues to shape Russian perceptions of strength, endurance and patriotism.

The subject of your film, Slava Fetisov, played in the Soviet and the American system. So did others. Why single him out?

First of all, he’s one of the most decorated athletes in the Soviet Union. He was captain of this team. He was more or less the face of the country, representing team and country. He went through three generations of Russian hockey players: the late 1970s, the heyday of Soviet ice hockey in the 1980s – and then an NHL career. Lastly, he’s a fascinating, complex character who I felt provided a window into the Soviet Union and the Soviet system.

What’s your understanding now of relations between Americans and Russians?

I think Americans probably understand Russians less than everybody else. In a sense, it’s evident in the whole Cold War issues that are happening again and this was one of the inspirations for the movie. This is an unknown story to many people. A lot of what’s happening now is a reflection of the past. Russia is trying to assert itself again.

Did you sense any ambiguity regarding Soviet history?

I feel that Russian history is inherently ambiguous and paradoxical. That’s what I was getting at. I didn’t have to try. That’s part of what the Russian soul is. It’s inexplicable: partial insanity, partial darkness – this history that a lot of people don’t want to talk about. It kind of came naturally. These guys all grew up in the Soviet Union. Their views and experiences are shaped by that. They’re not going to reinvent themselves as something completely different.

And Fetisov himself: any ambiguity there vis-à-vis the system?

I still don’t really understand him fully. I’ve spent a lot of time with him and I still have mixed feelings. He never told me what I wanted. If he knew that I was trying to get something, he would always tell me the opposite. He’s a challenging guy. He doesn’t want to be told what to say, or be pigeonholed. He’s defensive, he’s tricky. He’s a lot like he plays on the ice.

Early on, Fetisov gives you the middle finger…

This was just a perfect way to show who it is we’ll be seeing. It makes you want to watch: who is this guy, and what’s his story? But it also symbolises who we think Russians are. We think: oh yeah, this guy, he’s that typical rude Russian. But then you realise that behind that there’s this difficult story.

Over the course of filming, did your feelings towards him evolve?

I was a fan of the way he played. It was incredible. But I was never starstruck. I was just trying to get something interesting. He tried to intimidate me, but I wasn’t intimated. I just wanted to make sure that we got what we needed to make a great film and tell an honest story.