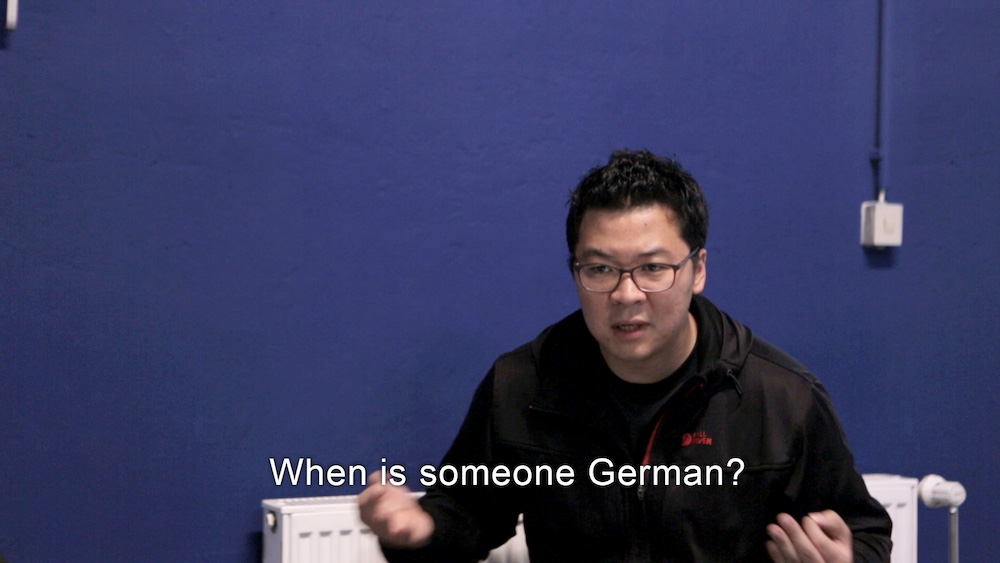 White expats in Berlin often encounter a city of creative possibilities, a place where locals will patiently correct your bad German and every other person you meet seems to be from Australia or Britain anyway. But for non-white immigrants, the experience is often vastly different, and it’s this hidden racism that D’Angelo highlights so well in Past Present Tense. Mostly foregoing narration to focus on the words of her interviewees, D’Angelo reveals – and interrogates – anti­-Ausländer sentiment in post-reunification German.

“There’s a standard question asked to someone who doesn’t look white: Where do you come from?” says Jan Riebe, a social scientist at Berlin’s Amadeu Antonio Foundation, an anti-racist organisation. “I’m white, and it’s clear that I’m German,” Riebe adds. Actually, his heritage isn’t German – it’s Polish. He feels that his appearance protects him from the casual (and sometimes not-so-casual) racism that many Germans of Asian, African and other non-white backgrounds often still face on a daily basis.

Riebe’s colleague Anetta Kahane, chairman of the Amadeu Antonio Foundation, explains how much education about racial and social differences was lacking in many GDR schools, leaving young people unprepared to deal with rising anti-immigrant feelings in the early 1990s – the time of the Rostock and Hoyerswerda riots. “We suddenly had many organised far-right extremists and neo-Nazis,” Kahane says. Named after an Angolan contract worker who was killed in a 1990 racist attack in Eberswalde, the Amadeu Antonio Foundation was created in 1998 to work for a more multicultural society, with Kahane one of the founding members.

D’Angelo seamlessly moves between the stories of Kahane and other academics working to end German racism to accounts of the discrimination that persists in this country today. One student, Jasmin Truong, offers an insightful view: “It’s often the case, in Germany, that the problem is with people who look different,” she says. “People come up to me and ask me where I’m from. Then I say Munich, and they laugh, or think it’s a joke.” Another Asian-German student, Minh Nyugen, says that people often greet him with “Konichiwa”, although he is not Japanese. “Then I respond in German,” he says, and adds, “I speak German just as well as you do, so speak to me in German.”