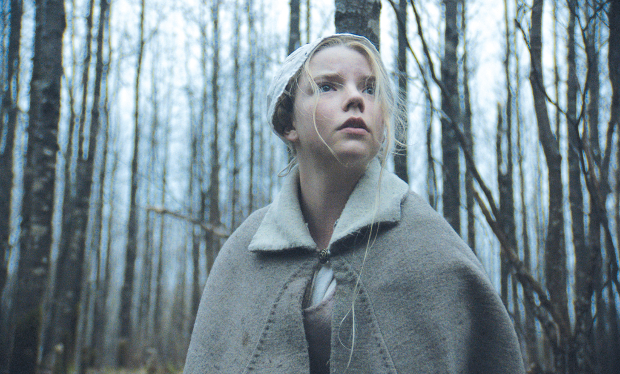 Since premiering at the Sundance Film Festival in early 2015, the film has been garnering accolades everywhere it travels, including the coveted Best Director prize in Park City. It follows a deeply devout family of early New England settlers whose life is torn apart by a witch haunting the woods nearby.

In the current business climate  – at least in the States – if you want to get your film made or seen as a first-time filmmaker, it should be a genre film. Since I’m from New England and I’ve always been interested in its mythic past, I figured I should make the film around there. So the idea was to make this archetypal New England spook. And if you want to deal with witches in New England, it has to be in the 17th century. I could never have a afforded to do a Salem story because of the scale, and also because it’s been done well already. So I decided to set the story during the very beginning of New England, the Great Migration. It was almost like the Middle Ages in North America – the parents in this film grew up under the reign of Queen Elizabeth. I thought that’d be exotic, and it would make a better horror film because the family would be more vulnerable.

What about witches interested you the most when you set out to do this movie?

I wanted to understand what the witch archetype actually was. How did she become the cheesy Halloween decoration or the Wicked Witch of the West as portrayed by Margaret Hamilton? How was that figure so important and powerful in the early modern period that women were being murdered for it?

Was it important for you to actually show the witch in the movie?

Well, some people accused me of having my cake and eating it too, which is fair enough. But just because I show the witch doesn’t necessarily mean that she is or isn’t real. Though of course, if someone believes something’s real, they’re real. The reason I show her to the audience early on is because people today don’t know what the witch of the early modern period is. They don’t know what she’s capable of, what the stakes are. What happens early in the film is something that would be understood by every character in the film: that’s what a witch can do to you. By showing that, we know the stakes immediately.

What do you think makes a movie scary?

You have to take your time to try to explore what’s dark in humanity, because that’s what’s actually scary. And darkness is half of our existence, I suppose, so it’s important to deal with these things.

The possession scene in this movie, for example, came out so creepily even when we’ve seen so many possession/exorcism movies in the past years.

Look, when The Exorcist came out, no one had seen anything like that. No one had seen a little girl say “cunt”. No one had seen a film released in theatres where someone’s stabbing their genitals violently with a crucifix. Even the sillier stuff, like the spinning head and the vomit, was so beyond what anyone had ever seen that the power of those images was really extraordinary. But now that everyone’s been trying to top each other, we’ve seen everything there’s to see. It doesn’t have any impact anymore. So pretty much every single time there’s something supernatural happening on screen, I tried to articulate the situation in a way that could be grounded in scientific reality. Without spoiling any- thing, the apple in the possession scene, for example, is just small enough that it could have somehow occurred naturally. I think that helps make the movie scarier.

The scene is staged relatively modestly. How did you know it would work so well?

I mean, I didn’t know it would work. I had to just trust that it would. The whole film was very specifically shot-listed beforehand, everything planned meticulously, except for that scene. The reason is that we needed to have the actors before we could even understand it, so it ended up being the most collaborative scene, which I’m very proud of. We also rehearsed it the most. The director of photography Jarin Blaschke is more responsible for the shot choices in that scene while I was mainly focusing on doing the scene with the actors. Also we knew that Harvey [Scrimshaw]’s performance really needed to be great, so Ralph [Ineson] and Kate [Dickie], who played his parents, were like my secret weapons in drilling that performance out of him.

There’s a classical, pristine quality to the way the film looks that’s rather unusual for horror. What’s the reasoning behind that?

It’s just what I like. I’m very inspired by the canon of classical Western art history and the golden age of fairytale illustration. And I think part of my work is making harmony out of disharmony. I mean, the characters look dirty in the film, they look like human beings and not like actors, their surroundings smell like dung and the house is falling apart. But it’s my work and the DP’s work to see the beauty in that.

Was it challenging to get the look of the film right?

It wasn’t a big challenge per se because I really knew what I wanted. I worked as a designer to make my living through my twenties, so it was an easy collaboration between me and the designers, and I’d worked with the DP for years. The real difficulty became keeping it gloomy in exteriors. That was very hard because it required twisting our schedules, which made it difficult for the crew. In the end, we put all of our money on screen. Our infrastructure was very small and where we were shooting was so remote that there was no wifi or cell service. So making these big schedule changes was rough. And doing the night exteriors was also not easy because we just didn’t have the lighting we wanted. The final look of the night scenes, more than anything, came together in digital post- production.

The film’s ending raised some eyebrows. Was it part of your vision all along?

Yeah, it’s the only ending that could exist for me. It’s interesting, I was watching Andrzej Żuławski’s Possession (1981) again about a month ago. I think I feel about that ending the way many people feel about the ending of this film. I don’t understand all of the politics that made that film important to him, and I sense that you need to have that understanding for the epilogue to be really powerful. But the psychological and archetypal stuff throughout the rest of the film is so powerful that I love it anyway. So I guess in the end, I’m just trusting that he knows what he’s doing.

You said in one interview that “when you make a witch movie, issues of female empowerment rise to the top.” Can you elaborate on that?

I think we haven’t escaped the shadows of the past. We haven’t escaped the fact that the witch hunts in Europe and the Salem witch trials in the States could not have happened without an extreme patriarchal society that didn’t understand female power at all. I think Western culture still hasn’t come to grips with that, even today. I didn’t set out to make a feminist film, I was going to make a film about witches. But after just two minutes reading two books, you realise what’s going on here.

The Witch opens in Berlin cinemas on May 19. Check our OV search engine for showtimes.