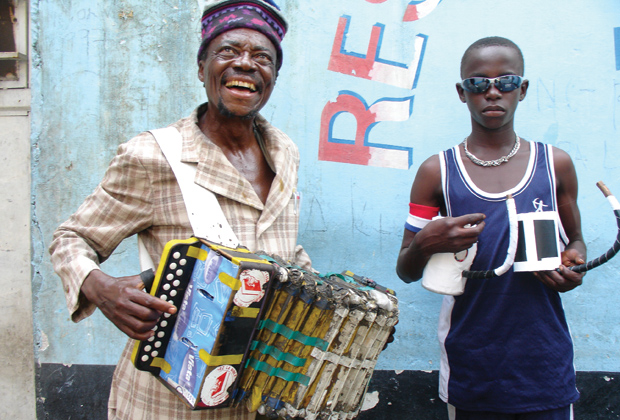 Seven years ago, two French directors stumbled upon a band of street musicians in the Congolese city of Kinshasa. The band, known as Staff Benda Bilili, were all in wheelchairs but played with a seldom-seen energy. Six years later, they’ve traveled the world and topped the world music charts. The film Benda Bilili!. chronicles their incredible journey from the streets to the big time. Director Renaud Barret tells the story.

How did you get the idea to make the movie?

We were shooting our first movie in Kinshasa (Jupiter’s Dance, 2006), and we met the band quite by chance late one night. They were rehearsing in the street, and we immediately fell in love with their music. We decided to make an album with them – that was the first idea. But we also started to film them in order to make a promo, make them visible. After two years, we realized that we should do a movie.

What attracted you to the band?

It was the funkiness in their music. It’s a mix of tribal music, of Congolese rumba with the funky spin of James Brown. So for us, it was just like a revelation. Plus the lyrics! In the beginning we didn’t understand their words, but as time went by we started to understand that they were addressing the people in the street; they were sending a message of hope to all the outcasts that were living around them. They weren’t talking about Africa, or being handicapped or black. They were more about free will, willpower, dignity.

Kinshasa plays a big role in the film…

The city is so different; it’s bursting with life, but it’s also very cruel and difficult. The living conditions are terrible. We decided not to hide in hotels and be white expatriates. We wanted an artist-to-artist relationship, which meant living with them in the streets. This also made it possible for us to be a bit credible and maybe to catch things that we wouldn’t have got living differently. It was such a wonderful, terrible, crazy world to live in. I don’t believe in God, but there’s something going on in that city. I don’t want to understand it; I don’t want to know.

How did living with the band affect your relationship?

It’s like a family reunion whenever we meet. We get the feeling that we have achieved something together. It’s a symbiotic thing. Now they’re touring the world, and obviously their lives in Kinshasa have changed a great deal. All of them are out of the streets, they all have houses, their children are able to go to school, and they run little businesses here and there.

Has that changed their music?

They used to get their inspiration from living in the streets and now they’re big men… In fact nobody really cares about their music in Kinshasa. There are four local stars in Congo, and they lock up the small music market there. Plus, the fact that they’re handicapped makes people there look down on them. But they don’t care; they prefer living quietly in Congo with their families, not being too exposed. They’ve become bosses in Kinshasa, you might say. Which no one could have imagined when we started in 2004. Except them! They said to us on the third day we met them that they would be the most famous disabled band in the world. And we were like ‘yeah right’. But now, in fact, they are.

Benda Bilili! opens in Berlin on May 19.