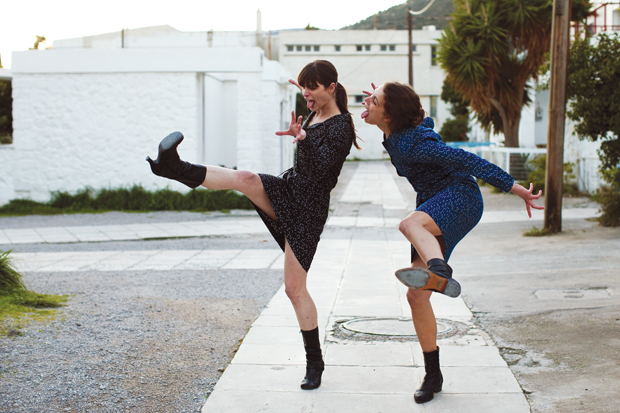 Along with fellow director Yorgos Lanthimos, Athina Rachel Tsangari has been instrumental in spurring the recent resurgence in Greek filmmaking. She brings an incredible number of influences and interests to bear on her second feature film, the deadpan love story Attenberg, garnering praise at festivals all over the world and securing the best actress prize for Ariane Labed in Venice in 2010.

What is your fascination with British naturalist and broadcaster David Attenborough?

I didn’t grow up with him. His nature documentaries were not shown on Greek television. When they started showing them, I had already moved to the States. So it started about 2000-2001, when I was already quite old. I was fascinated, I guess, by how tender he is with his subjects, and how thoughtful and precise he is in the disclosure of how the systems of others species work. He brings all this humanity to science.

You retain strong parallels to Greek tragedy: the very small cast, the huge emphasis on gesture, on sex and death. It’s all consciously done?

How do you feel about earlier schools of Greek filmmaking?

I consciously wanted to depart from the tropes of at least late Greek cinema. After almost a millennium of being part of one empire or another, we lost this austere, measured relationship that we had with life and the representation of life through art. We became maximalist, over-lyrical to a sickening degree and very pompous. I wanted to avoid that. The whole idea was to subtract, remove, remove, remove and detach to the bare minimum, leaving a triangle. It’s all about simplifying and breaking down into simple forms and then having emotions seep through that, but almost despite themselves.

Hence the choice of music: minimalist electronic punk by Suicide…?

Is your film also a comment on the current state of Greece?

Not directly. We were shooting when the crisis was officially announced. But this sort of malaise and sense of betrayal and failure is something that we’ve been experiencing for the last 10 years, slowly overtaking all of us. I went back to Greece after having been in the US for 15 years, so it was easier for me to catch on to all this malaise and melancholia. It smacked me in the face.

So the relationship between Marina and her father exists in the wider political context of a state and its children?

Yeah. Definitely that. The idea of having two people from different generations who are teaching each other: there’s a sense of equality, a sense of fair exchange. He is helping her liberate herself from him, which is something that Greek parents, parents in general don’t do.

The film closes with a completely unpeopled landscape and a sense of total isolation.

Yes, what remains are the landscape and the ruins. These are the ruins of modern Greece. They are like the Acropolis, which are the ruins of our collective psychosis with our past. It’s a bauxite mine, depleted by a French company that came, took everything, ruined everything and left. But you don’t need to know this; the fact that you felt this sadness is enough.

Attenberg opens in Berlin on May 10. See our OV search engine for showtimes.