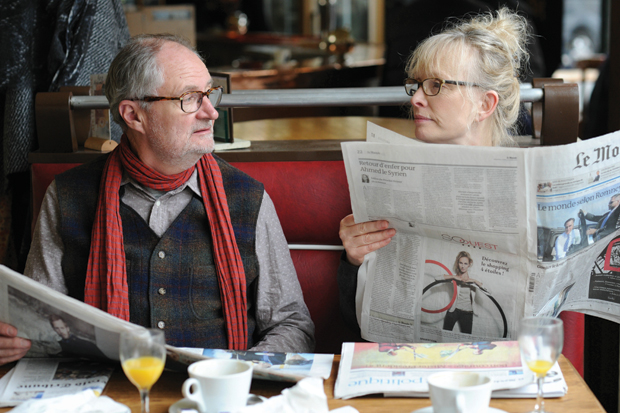 British director Roger Michell has made a name for himself with comedies that consider relationship difficulties from unusual, often age-related angles. Le Week-End is one of his best yet.

With a script by Hanif Kureishi, Le Week-End successfully tempers the middle-aged resignation of a couple on its way to Paris for an anniversary weekend with situational comedy and a hint of nouvelle vague vigour.

The passive-aggressive relationship between your protagonists comes over really well in that fidgety opening Eurostar scene. Could it also have been the closing scene?

Good question, and the answer is yes. The ending isn’t sure of itself and that’s intentional. They’ve rejoined the dance but the ending doesn’t betoken a sequel. They have come forward from the opening of the film but it’s still unclear what’s going to happen in the future.

A male scriptwriter and a male director observing a frustrated and rather mean female protagonist. How comfortable did you feel with that?

Very comfortable. But I don’t think she’s mean. Why do you think she’s mean? He’s a very irritating person. The kind of person who, the minute he bumps his leg, insists he’s taken to casualty. And she knows that about him. He’s loveable and all that, but he’s a pain. And that’s what she’s become impatient with. She wants to be alive, properly alive. Like a lot of people at that age, they suddenly realise that they’ve got another 10 or 15 years left, not of twilight but of blazing light. And that’s what she wants.

Dishonesty with oneself is also an abiding concern. Is this something you’ve returned to deliberately: self-knowledge as the main saving grace?

All my films are love affairs. That’s what they’re trying to fathom: the difficulties of being in a relationship. How self-knowledge is linked to being able to live with someone else is complicated but I imagine there is a link. Most of the films I make are about people negotiating a relationship. They are transformative stories. And a lot of them seem to be ugly duckling stories. Certainly in the case of Persuasion or The Mother, they’re stories about people who don’t know who they are, or who’ve forgotten who they are. In this case, I guess you could say that these two characters have forgotten who they were.

Were you aiming for catharsis?

You know that the whole thing has to be wrapped up within 48 hours and there’s something about the odyssey of them making this journey, a pilgrimage to their past, which is also simple but effective. I don’t think I feel cathartic when I watch this film. I feel strangely reassured. They’ve succeeded in finding something new about each other, which they find appealing – and let’s hope that lasts.

You’re a naturalist director but your use of music in closing scenes – the circus in Persuasion and now the grooving in a café – is also a little transcendental.

The Persuasion circus is transcendental in that it was a pastiche of Fellini. The music here, the La bande à part music from the Godard film, isn’t. It’s absolutely appropriate to the film that they dance to earlier on. But obviously, it is the music from the early 1960s and the whole film is imbued with the spirit of the nouvelle vague. They would have watched those films as students. They would have been interested in the événements of 1968. That’s their spiritual home.