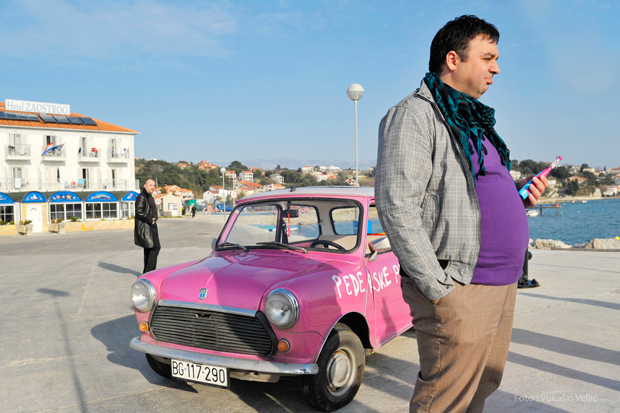 One thing’s for certain: Srdjan Dragojevic’s farcical take on a group of gangly gays who want to host a gay pride parade in deeply homophobic Belgrade is a film worth talking about. Although well received by critics and the public (it nabbed the Siegessäule reader award at this year’s Berlinale), it also had its share of critics from both the right and, more notably, from the left side of the political spectrum. But Dragojevic’s take on LGTB relations in Serbia can be considered ground-breaking considering its country of origin.

I heard this film took a while to come about. Why?

The process of making this film began almost a decade ago. The first attempt at staging a Gay Pride event in Belgrade ended up in a bloodbath in the Republic Square [Trg Republike], the main square in Belgrade. Thirty or forty LGTB activists were beaten up by hundreds of hooligans and neo-Nazis, with the police just standing and watching, doing nothing. I was so pissed and ashamed because it was the time when Milošević just left and so we were hoping for a new era, for a different time. Suddenly you had images of violence similar to the 1990s. For years I tried to find the proper way into the story. I even threw away a script that was a really a dark drama about what it is to be gay in Belgrade – living day-to-day with danger and humiliation.

Why didn’t that film get made instead?

I figured out that making the film that way would mean that it might only get shown in some kind small festival ghetto, with a really limited audience and influence on the people who are actually supposed to watch the film and come to conclusions about the situation in the Balkans. It would be watched by the same kind of ‘ghetto’ as the one gay people are forced to live in there, so I decided to completely change the perspective and look the opposite way. I said, ‘Okay, maybe it would be more efficient to make a film for the majority, for the homophobes.’

So you did a tactical rewrite of your original idea?

It wasn’t a tactical rewrite, I just decided to throw away that script and write a completely new one. For ten years I just couldn’t find the proper tone for it, then I remembered one of my films Pretty Village Pretty Flame, which was the first film ever made about war in Bosnia. It was a very successful tragi-comedy on different fronts – I mean internationally and in the region, acquiring cult movie status. I said, ‘Okay maybe that’s what I’m best at doing: combining the funny and the tragic.’ We were turned down by 200 companies whom we’d approached for sponsorship: we’re talking Adidas, Nike, mobile phone producers, who said they just couldn’t sponsor a film with gay subject matter because “our customers are homophobic.” That’s just the nature of these corporations; they make declarations on human rights, but if there’s a profit issue…

And the gay reception at home?

It was quite good, for example in Montenegro, where the situation with the LGBT rights is toughest. The LGBT organisations sent a public message of thanks to the Minister of Culture who supported the film. Some complaints came from gay activists in Belgrade who complained that I didn’t have the courage to show physical intimacy but I didn’t include that on purpose. I’m a shy person. There was no sex in my previous films, gay or straight. It worked out well. If I’d included a sex scene everyone would talk about that and miss the rest, which is more important.

Do you classify it as a dark comedy?

I can only classify it as a psychotherapy session.

For yourself or for Serbia?

For Serbia. I’m a trained psychotherapist. I studied clinical psychology before I went to film school. This film works as a kind of psychotherapy session for homophobes. I kind of had this rollercoaster structure in mind. You start not being sure of what you are watching, like some kind of first act where you have combination of comedy and drama. Then the film turns into a comedy and a road movie and the homophobes watching the film can relax and can say okay: it’s not about a gay issue, it’s something I can relate to more easily, something I can laugh about. Then the film moves into drama and ends up a tragedy. As every psychotherapy session is a positive manipulation, this film is a positive manipulation as well.

And how did you end up writing for these characters, both the soldiers and the gays.

I had a lot of templates. They are friends of mine. I have a lot of gay friends and a lot of people who used to be kind of in that grey zone – let’s say criminals. I mean, I’m a social person and I like to mingle in many different circles, so I got offended when people said: ‘Your characters are based on stereotypes’. They are all my friends. I based them on people I actually know and hang with, so that kind of comment doesn’t do justice to my work. I mean, of course stereotypes are a vehicle for comedy – Aristotle, Molière, Shakespeare – but I know that I’m also good friends with all the people I portrayed.

So do you see similarities between these soldiers-turned-criminals and the gay population?

Oh, all that war shebang in ex-Yugoslavia had that kind of gay quality, brothers fighting each other, banging each other. I always felt that there is some sort of ambiguity towards sexuality: that the aggressions vented on the gay community also come from a widespread ambiguity vis-à-vis personal sexuality. When you need to suppress the homoerotic impulses you hit hard outside. You hate someone.