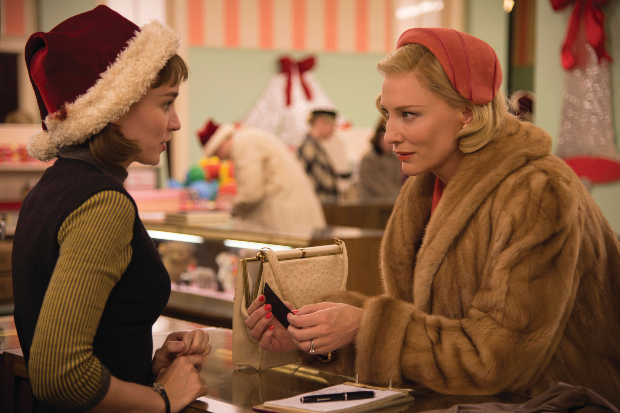 Acclaimed American filmmaker Todd Haynes’ romantic drama Carol is one of the best-reviewed movies of the year.

Adapted from Patricia Highsmith’s novel The Price of Salt, it follows the fiery affair between young shopgirl Therese Belivet and older socialite Carol Aird that begins the moment they lock eyes on each other one Christmas in 1950s New York.

What were the most significant changes you made adapting the novel?

The novel was told entirely from the character Therese’s perspective. The script tried to create access to the character Carol as well. We needed to be very careful about that. For example, the first time you enter Carol’s world is when the mail truck delivers her the gloves from Therese – so we’re literally transported into it, through the handiwork of this girl with an infatuation. But my biggest change was a structural one. One of the first films I thought about was David Lean’s Brief Encounter. I love that structure where you only fully understand what something means after coming all the way through the story and returning to the beginning.

The fact that these two characters are both women isn’t the defining part of their love story. Do you think this would have been possible 10 years ago in mainstream cinema?

Of course, there have always been stories about love between women. Mädchen in Uniform (1931) was a pretty big movie. Or The Children’s Hour (1961), with two major stars. When we assume everything moves in this one, forward momentum, we’re missing the interesting, circuitous leaps forward and backward that history takes.

What do you think is the relevance of this film today?

For me it wasn’t about, “Look how far we’ve come! Look how much better or easier it is now!” I think the predicament of being in love is just as perplexing today as it ever was. Also, surprisingly, coming out still seems fraught with unimaginable challenges even though the cultural landscape is so different. But social media is a distorting factor, for example. And I think proclaiming who you are is still a tender, awkward event.

When did you find your own identity?

Oh, I still haven’t yet. I don’t know I believe in identity as anything locatable. It’s always changing, always somewhat artificial, imposed from the outside, willed from the inside. That’s what interests me in all my films, whether it’s these women in domestic settings or artists acting out and refusing stable identity models.

You’ve worked with Cate Blanchett twice now. Can you talk about that experience?

The thing I’ve learned from all these actors I’ve worked with is that the things most people think actors don’t care about, like the visual style, framing, point of view, etc. – they do care about them. For Cate in this movie, what’s remarkable to me is that she knows she’s playing the object of Therese’s desire, but she’s also playing a real person. She can’t be too available to the spectator when she’s being conjured by this girl. Somehow she knows how to do that, which is so fascinating to me – to be both inside and outside the character.

What do you think has changed in LGBTQ cinema since the start of your career?

I think we’ve gained a lot and we’ve lost a lot. It’s not the same world at all as the one I came out of during the late 1980s, early 1990s. All the progress we’ve made since then is necessary, but it also means a critical perspective and a position outside the main, dominant society has sort of been surrendered for assimilation and acceptance. You know, “Being just like everybody else – but gay!” That is something I think Jean Genet is still rolling over in his grave about. Or maybe not – maybe he’s blowing his gay marriage whistle from the grave, who knows?