Adina Pintilie on winning the 2018 Golden Bear with her polarising outsider Touch Me Not, and sharing her experience at Berlinale Talents this year.

Adina Pintilie’s bold debut feature Touch Me Not, an experimental fusion of fiction and documentary exploring intimacy from a range of female and minority perspectives, is the most divisive Golden Bear winner of recent years. Its sex-positive outlook made it a natural fit for open-minded Berlinale audiences, but some early reviews were savage, with The Guardian’s Peter Bradshaw proclaiming the jury’s decision a “catastrophe” to rival Brexit and the Trump presidency. This year, the Romanian director returns to the festival as a guest of honour at Berlinale Talents, an industry development programme for up-and-coming film professionals.

How has your life changed since last year’s Berlinale? Did the Golden Bear open many doors for you?

The Berlinale had a major impact on the film’s life. First of all, the selection committee’s decision to include it in the main competition was huge for us. The film was a seven-year labour of love, a long and often very arduous journey. So it meant a lot that the Berlinale put their trust in our work by giving us such a high-profile slot. And the awards gave us extensive international exposure, which ultimately allowed us to share the film with a wide audience. We were invited to over 50 subsequent major festivals, and secured further distribution in over 35 countries.

Based on your experiences this past year, would you say that Berlinale audiences are particularly receptive to challenging cinema?

The Berlin audience was certainly receptive to the conversation that the film proposes. Our intimacy, our bodies, our sexuality are such essential aspects of our lives and yet they are topics that many struggle to talk about, there are so many taboos and blockages, so much guilt and shame. Touch Me Not is an invitation to a dialogue. It challenges you to look inside yourself and maybe reconsider the way you see and feel about things. It prompts a self-reflective process which is not always comfortable. That’s why it can be a difficult viewing experience – it takes you out of your comfort zone by offering you new and perhaps destabilising perspectives.

But some of the early critical response was very hostile. Did that take you by surprise?

There was a surge of feedback covering the entire spectrum, from glowing praise to extreme negativity. But as sex worker Seani Love says in the film, “all emotions are welcome here”! The initial resistance came mainly from a limited group of journalists and film critics. But regular audiences generally responded positively, which suggests to me that some film professionals under-estimate the emotional intelligence of the regular cinema lover. 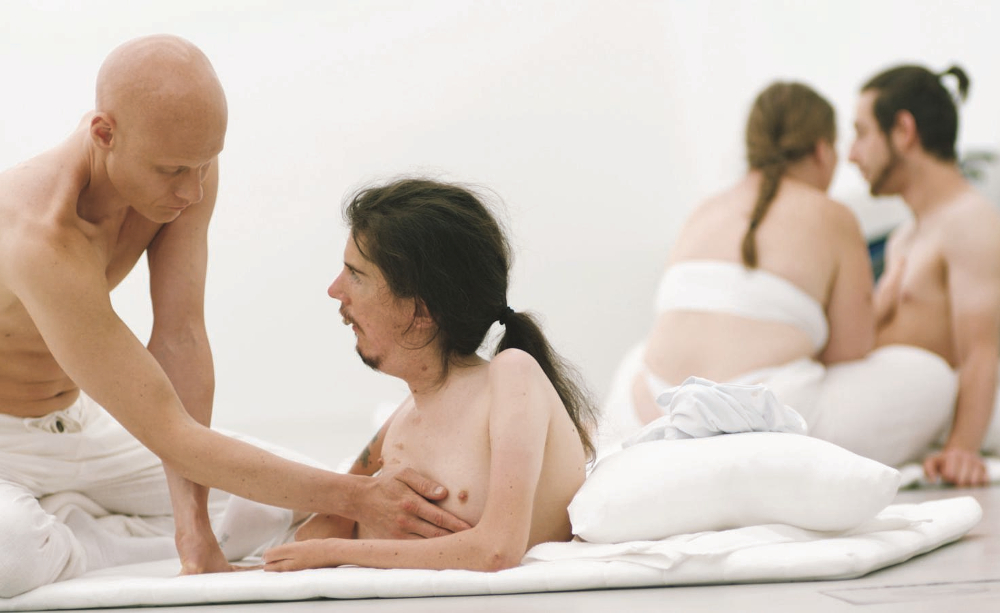 You’ve adopted an unconventional strategy for the film’s release by taking it on a global tour with your protagonists. Why this approach?

It was obvious from the Berlinale premiere that the film had the potential to reach beyond the cinema space, into the public debate forum. Our protagonists have a charismatic presence, progressive world views, and strong emotional motivations to share their experience and opinions with the public. Most of them are outspoken human rights activists, raising debates on the sensitive topics the film tackles, from intimacy and disability to gender fluidity. Touring the film with the cast has allowed us to fully develop this active dialogue with the viewers. And I can honestly say that we’ve encountered a warm reception wherever we went. It’s fascinating and heart-warming to see how people open up emotionally after the screenings and start to share their own experiences.

Could you give us a taste of the wisdom you’ll be sharing with a new generation of filmmakers at Berlinale Talents this year?

I don’t know if it’s wisdom exactly, but I’ll certainly be sharing some of my most enlightening recent experiences. Ultimately, I think that the successes of Touch Me Not should inspire and give courage to young filmmakers to follow whatever they believe in.

Each year, Berlinale Talents invites 250 fledgling film professionals to participate in a week-long summit at HAU comprising panel discussions, masterclasses and project labs. This year 25 out of 100 planned events will be open to the public. Adina Pintilie will be discussing the innovative distribution strategy devised for her challenging 2018 Golden Bear winner Touch Me Not on February 12 (17:00, HAU3). Other special guests this year include David Lowery, Charlotte Rampling and Joanna Hogg. Head to berlinale-talents.de for full listings and booking info.