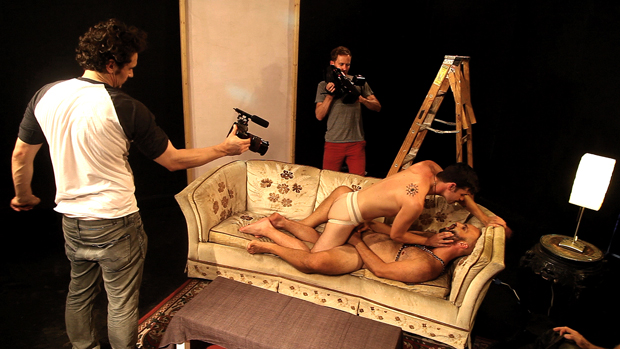 William Friedkin’s Cruising was critically divisive when it came out in 1980, protested not only by right-wingers who were appalled at a frank portrayal of homosexual life, but by a sanitised wing of the gay rights movement, who feared the film would betray their political ambitions. Travis Mathews’ and James Franco’s Interior. Leather Bar. uses Friedkin’s controversial film as a launching point for their meta-exploration of sexual expression through the supposed lost 40 minutes of footage from the original film. Interior, however, wasn’t exactly the fuckfest people expected (although it had explicit sex) and courted controversy both by defying its own expectations and fuelling a rather forced reaction to the media saturation of James Franco at the time.

Why did you choose the project in the first place?

It’s a bit of a story about how James and I came together. Around a year and a half ago, James was wanting to do a project that used the film Cruising as kind of a reference point in some way. He wanted to do something that used explicit sex as a narrative tool and he also wanted to do something that had some sort of compare and contrast between 1980 and our present day – the representation of gayness in cinema and explicit sex. He didn’t have a real clear idea of what he wanted to do but those are some points that he wanted to explore. And he didn’t want to do that by himself, he wanted to do that with someone who had already been making movies with sex as a storytelling tool.

Were you and James already friends?

At the time, I didn’t know James and he didn’t know me. This was May last year. My first feature, I Want Your Love, was doing the festival rounds and so I got under his radar and he basically just contacted me out of the blue and asked if I was interested in collaborating with him on his project. I was very familiar with Cruising, its history, controversy, the protests and its representation and all of that. Initially it was just the two of us feeling each other out to make sure we were on the same page with how we might approach this and also our politics around it, and feeling out how we would work together.

The film is just as much about the actor who plays Al Pacino [Val Lauren] as it is about yours and James’ exploration of these 40 minutes of missing footage.

When I read the treatment, the thing that I thought would really hold it together and keep it cohesive was to tell the story through a character who was some version of the Al Pacino character in Cruising. I wrote the treatment with this guy in mind who was going to be coming on the set, going into this gay subculture that he wasn’t familiar with. He’s a straight guy, and you know it’s his journey throughout the course of this really long production day where we created these 40 minutes. So it was meant to be parallel in the same way that in the original Cruising – Al Pacino goes into this subculture that he’s not familiar with and it changes him in a particular way.

It’s very much back and forth. I created a very bare-bone treatment. It was only a few pages and there were key scenes that I knew needed to be in there in order to create a skeletal arc for this character. We left a lot of space for things to just happen on set. And there were all these cameras rolling, so there are scenes in the film that are very much scripted: where it’s very clear what needs to happen in the scene and what the goals are and what’s happening with Al’s character. There were a lot of scenes that were much more documentary and things that happened more organically on set.

So the 40 minutes of Cruising is kind of a set-up?

Just out of curiosity, did Friedkin ever see the film?

I don’t think so but it’s funny because he’s been doing a book tour, and a lot of his movies are making the rounds again, even Cruising. And he’s been asked a lot about those 40 minutes and our project. And at first he was kind of talking about it in a very tangential way, but to my knowledge now he just deflects any comments on it.

He’s hiding from his own legacy in some way.

So many people across the board think Cruising is homophobic and its representation of gay people is terrible. And he entered into that film, he says, because he wanted to do this particular murder mystery, and there were real-life killings that were happening in this community and he had some personal connection to somebody and who was involved in the killings. He’s always been supportive of the gay community. And I think he feels like he’s spent a lot of energy defending his decisions and no one ever gave him any credit for that, and so I feel like he’s a little bit exhausted defending that and doesn’t want to revisit it because he’s not going to win that argument.

How do you feel about the reaction to the film?

It’s been completely polarising. And I kind of knew from the beginning, before I even talked to James on the phone, when I got an email, you know, James Franco + Cruising + explicit sex in it + another gay project that he’s doing. It’s still such a lightning rod of a film for people. It also seems like a lot of audiences have reached their tipping point with certain things that James has been doing. So I knew that it was going to bring a certain amount of controversy, and also a certain amount of polarising responses. But I would much rather do a movie where people feel really strongly one way or another than to do a movie where people forget about it and it’s just sort of a tepid experience.

It came out as critically divisive.

In some ways, James’ presence and his celebrity eclipses everything that he’s involved in. But when we started getting into this project, I knew that we had to have him in it but also the least amount possible in some ways. I didn’t want it to become the James Franco show. And I also knew that if we were going to tell the story through the arc of this character Val Lauren then it needed to be his story. James functions as the William Friedkin of the film: the director that has it all—what is his interest in this subculture?

It’s tricky in terms of response. Those that don’t feel like a personal attack on James, I’m interested in but it was a disappointment to see reviews that seem very personal with regard to James, with such a skeptical and cynical perspective based on his other projects and the number of projects he’s done with gay content. The ones that seem very personal, I just dismiss and don’t really think much about…

Interior. Leather Bar. hits Berlin cinemas Oct 17 and screens at the PornFilmFestival Berlin on Oct 25 and 27.