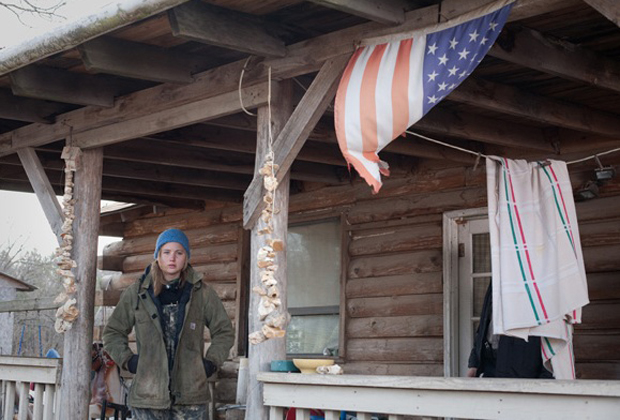 It’s not every day that a film with a small budget and no recognisable names, set in a remote world unknown to most viewers, ends up on the Oscars shortlist – reaping award after award on its way – a Grand Jury Prize at Sundance and an Audience Award in Berlin to name a few.

But New York director Debra Granick’s second feature Winter’s Bone is an unusual gem – owing both to the thriller and noir traditions, but with a documentary-like approach to realism. The film is obviously the brainchild of a director who became totally fascinated by her subjects – the gutsy teenager’s odyssey but also the reclusive sorrow of the Ozark mountains of Missouri. Granick’s characters feel as real as their gritty, meth-riddled surroundings – a place that oozes the musky smell of pine forests and conceals its corpses at the bottom of murky lakes… and troubled consciences.

How did it feel to get your film nominated three times for an Oscar?

It’s not a big film, so for it to be noticed and nominated was amazing.

All others were men-made films. With last year’s [Kathryn] Bigelow exception, women hardly ever get to win Oscars…

I notice that a lot of women don’t even want to talk about the Oscars, and no one wants to scream and say, “Hey what’s going on?!” – not because we’re afraid, but because it doesn’t work in our favour. I always think, just keep making films, and something will change!

So you’re not in favour of, say, a female quota at the Oscars?!

Adults are such children, really. I have to say that somehow awards… in some ways, it’s really a male concept. I don’t need this golden phallic statue to make me feel good about filmmaking. What I do need is for an audience to come to the theatre! All the stuff about whether Titanic is bigger than volcanic eruptions which is bigger than Inception, which is bigger than Facebook…. To me it’s just a foreign world that I feel threatens the rest of the world. I do think it’s good to infiltrate it – and I also feel it’s good to ignore it.

One of the Oscars you were nominated for was ‘Best Adapted Screenplay’. What seduced you in Daniel Woodrell’s novel? The character of Ree? The Ozarks?

Exactly. Both. I liked this girl. I was interested in her. I cared about her. There was suspense. I was curious whether she could actually solve her obstacles.

Speaking of men’s worlds and how women deal with them, Ree lives in a very tough, male-dominated world. Yet her strength is not to challenge it but to find her own path within the existing rules. Ultimately she tries to get to what she thinks is right. And she does… We’re far from the super-girl hero Kill Bill / Angelina types…

Those are one-dimensional, mostly male fantasies. I’m more interested in female characters that have a lot of different qualities. Ree is strong and tough, but she doesn’t have dragon tattoos… She also has the capacity to take responsibility for her brothers and sisters, to show love and affection. One thing that often happens to female characters is that they’re very beautiful or very smart, but then they’re also very mean. So I like that she has a whole bunch of things that made her a full person.

Your film shows a quasi-anthropological attention to detail. You obviously spent some time among the Ozarks people…

Oh yes! We went there many times over two years. We talked to the people a lot and photographed them, asked for advise on the script. We really wanted to be realistic. For instance, Ree’s house on screen is the real home of the girl that plays Ree’s little sister, Ashley. So those are her real toys. The clothes she’s wearing are the clothes she wears in real life. Nothing about her house was made to look extra poor, unlike what some journalists said here. That is her house.

They accused you of making it look worse than it is?

Not everybody, but some. What’s interesting is that the people there don’t consider themselves poor. They don’t say, “Oh my god, we’re poor Americans.” If you ask them if their house is big or small, they’ll say “small”. But they won’t say, “Oh, and we hope to have a bigger house.” It’s an interesting mentality that’s very, very foreign to the rest of the United States.

So the American dream didn’t reach the Ozarks…

Right, and people say “Oh my god, they’re lazy. What’s wrong with them? Don’t they want a bigger house – a better life?” It’s not that they want to be poor, it’s that they believe that life is also worthwhile when they’re just sustaining it, just living it. Not necessarily acquiring more. I’m not saying that they’re Eastern spiritual people that have no material desire. They do, but they also feel that there’s some virtue in living very humbly.

A lot of their energy is consumed with dealing with tough surroundings – they do so much themselves.

True. And there’s quite a bit of pride there. They don’t feel threatened by the global economy and oil prices, because they’re heating their houses with wood. When food gets very expensive, they will always go and hunt. But hunting takes a very long time. You can’t say, “I’m hungry; I’ll go get something from the woods.”

There’s a scene where Ree prepares a squirrel.

Yes, it’s not everyone’s first choice of food… but they are eaten in the Ozarks. The problem is that it takes a huge amount of work. Squirrels are so tiny, that to feed three kids, she would realistically have to catch a lot of them!

Jennifer Lawrence seems so realistic in the role of Ree. How difficult was it for her to get into the flesh and mentality of an Ozark mountain girl?

Her challenge was to be down-to-earth and be able to listen and learn. Ashley, the little girl that played her younger sister, introduced Jennifer to her life, to the dogs and the horses. And when it became time to do the scene with the hanging laundry, Ashley would say, “No, this is how we do it.” Jennifer had to spend quite a bit of time with the girl before we began filming. Also on the property. For example, she had to learn how to use that woodcutter.

So she really did learn how to skin a squirrel?

I don’t think she gets to use it at all. Now she’s living exclusively in Los Angeles and has a very special life… because of this crazy machine – again one of the United States’ disgusting machineries, this celebrity machine. Other countries seem to manage to have amazing actors without making them into these oversized celebrities. Here, not so.

You gave Lawrence an amazing role – there are not so many for young, teenaged actresses. Of course you can think of smarty-pants Juno. But this was not a realistic kid – more fake realism.

That’s true. Who would ever really have such an easy time becoming pregnant at 14? What struck me is how America exports films that show affluence and a glamourous lifestyle – even glamourous teenage pregnancy or drug use – and I do know that one comment that we get is that people are curious about other parts of the United States that don’t get shown very often.

You certainly don’t glamourise. How did the locals like your film? For instance you describe a local economy organised around the production of methamphetamines. How did they like that?

They were worried about that. It’s not like their whole world is negative and difficult. It’s showing that any time people get involved with drugs, it really poisons a lot of their behaviour. But I think in the end, they were sensitive to the fact that Ree, this daughter of their mountains, was a very good character. They felt excited to see her do things that were very much a part of their lives.

Winter’s Bone ran at last year Berlinale – that’s how we discovered it. How was your experience of Berlin and the festival?

I had such an intensely fantastic time at the Berlinale. Everyone got tired of hearing me saying everyday, “Oh my god, look at them all! All these families from Berlin are buying tickets! It’s so amazing; it’s so different than these exclusive festivals that happen in resorts!” And I couldn’t believe all the legroom in the theatres – and screenings in those former GDR-cinemas, it was so intense to see that. Berlin just slams you. I couldn’t even breathe. It slams you with past and present all at once – your mind is in two places the whole time. I loved it.

About Debra Granik Born in 1963 in Cambridge, Massachusetts, Granik went to NYU film school where she raised eyebrows with her druggie short Snake Feed (1997). Her first feature Down to the Bone looked at small-town addiction and won a Dramatic Directing Award at Sundance in 2004. Award upon award has been piled on Granik’s bleak 2010 Ozarks thriller Winter’s Bone, based on Daniel Woodrell’s novel of the same title. She lives in New York.