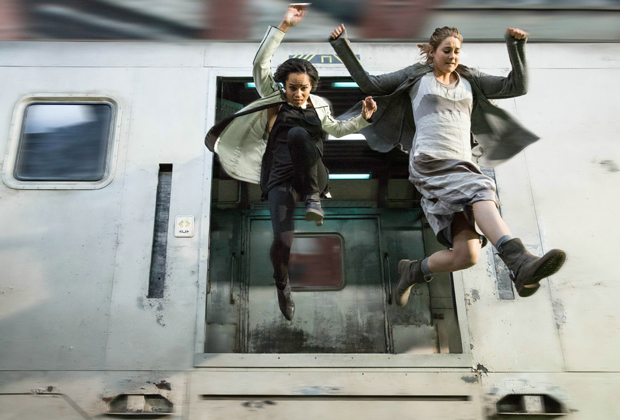 You’ve binged on “The Hunger Games” and faded in and out of “Twilight”: here comes Divergent, (part I of a trilogy), which opened April 10.

Yet another adaptation of a best-selling young-adult dystopian novel. It’s set this time in a post-apocalyptic Chicago whose populace is divided into five factions. Tris (Shailene Woodley) has to learn to fit in and her personal identity crisis is intermingled with an internecine power struggle between factions. Offsetting digitalised abstraction against real settings and real action, Neil Burger’s (The Illusionist) coming-of-age movie features Shailene Woodley in the main role. Exberliner caught up with the director and his star.

Mr. Burger: How did you translate from the book to the film, and still keep your own touch?

That was the real challenge. I wanted to make it as real as possible. It’s set in Chicago, but we’ve seen a lot of movies set in the future and they’re done it with digital landscapes and a lot of visual effects. I wanted to do as little as possible, so I thought: let’s use Chicago for Chicago. Let’s put our actors on the real streets. Let’s not do a lot of visual effects. Obviously we added some and took the water away from the lake, but all the buildings are untouched. That was my first idea.

How do you explain this modern phenomenon where we see so many female action protagonists? Is it a social issue?

I don’t know why it should be a social phenomenon now. What have we been waiting for? Why haven’t there been strong female protagonists at the centre of action movies in the past? Perhaps it’s an evolution of feminism or female empowerment. What we are willing to see women do. I think it’s great. Hopefully we won’t just see strong females at the centre of post-apocalyptic stories but also at the centre of any kind of story.

How is it working with young actors? Is it easier or more challenging?

It’s a bit of both. On the one hand you can say: this is my vision and this is what I want to do, and they will do it. Older actors would probably say: maybe we do it this way? With young actors, they’ll do what you want them to and get on with it, but they are less disciplined, less professional and less experienced. And they are emotional.

Did you feel like a kind of a mentor to them?

I did and it was really fun.

But you won’t be working with them in the sequels…

It’s really sad. I will miss them. I was editing this movie and I was trying to prep the next movie, and it’s like, I can’t do both. So I had to give it up. The hardest thing is really to give up working with those actors because I really care for all of them. They’re really talented. So on the one hand it was really hard. On the other hand, it was like a huge relief to let it go. I achieved my vision for this movie and I kind of pushed it out of the world and let it go. I did cast these people and have a relationship with them, so I am still involved. I am the executive producer in the next two.

You cast Maggie Q but she doesn’t get any action in the film.

In a big franchise, the fan base can be very dominant. In 50 Shades of Grey the fans didn’t want the actors, so the main actor quit. Would you permit that? Fans telling you how your movie should go?

It’s great to have a loyal fan base and you want to honour their love of the story, but you just have to make a great movie and to make it work as a movie. So there’s a little bit of a rocky road that you go through but you just have to be strong. I wouldn’t be doing it if I didn’t think the book did work as a movie. So I have my own vision. I shot it with that vision. It came out in North America and people loved it – because it’s faithful to the spirit of the book.

Your film is screened side by side with Noah. What you think about this wave of thinking in terms of the end of the world?

Somebody said to me also earlier today that both films blame human nature for the end of the world. Human nature is being punished in Noah. That’s why there is the flood. In this movie there’s Jeanine Matthew’s philosophy that human nature caused the war: people’s desires and inability to control their impulses. That’s what needs to be controlled. That’s sort of an interesting parallel between them.

And what’s your vision of the future?

I am going back and forth between very optimistic and pessimistic, but it’s very interesting that 40 years ago or 50 years ago, a vision of the future was that everything’s streamlined and futuristic, and we would all be flying around with our personal jetpacks. Certainly there were problems with that future as well, if you think of Brave New World. But it’s sort of disturbing that everybody’s vision of the future (and certainly these novelists) is that there just is no future. So kind of troubling.

Shailene, is it true that you were quite sceptical about the role at first?

It is true. You never quite know what’s going to happen with a film like this – with franchises. I talked to some mentors and I meditated a lot and realised that I was making a decision based on fear not on creativity. I was like: if I love this story and I love this character, then I should dedicate myself to those truths.

Who are your mentors in your acting and in the business?

In terms of acting, probably George Clooney and Kate Winslet. Outside acting, there are many other people.

You remember the first meeting with George Clooney?

The first time we met, he just came in and gave me a hug. He didn’t really give me any advice. I was just basically learning from him and from who he was.

What was your preparation for the movie?

We did about a month of training, physical training, hand-to-hand combat fighting and basic physical fitness, lots of push-ups.

This is also a movie about finding the real nature of one’s soul. Are you proud of what you have done?

When you finish the film and you walk away, you never really know what it’s going to be, because as an actor you just surrender. Then it’s in the hands of the editor, the director etc., but we are very proud of this film, and I like the messages that are intertwined with it.

It’s about choosing yourself over society’s pressure, pressure from the family. It’s about listening to your own instincts and intuitions. You can see how Tris becomes strong. That’s a great example for young girls.

You started acting very young. How did you make choices growing up in the Hollywood system?

I feel that no matter where you are in the world or what your situation is, as long as you keep yourself centred, it doesn’t matter. Your external situation is always going to change but if you keep your internal voice kind and loving, then you get to the inside of a tornado and everything else can be chaotic, but you’ll feel strong inside.

How do you rate the amount of female protagonists these days? Your protagonist or Twilight and Hunger Games and so on?

I think it’s wonderful and I am proud to be part of it. I think that there should be a better balance between masculine and feminine and one of things that I like about this movie is that even though Tris is the lead, Four is a very strong character beside her. I love the balance between them.

Do you think there is any reason why all these young adult novels are about dystopia?

I get asked that question a lot. Maybe because people see that the world can be like that. It’s a form of escapism.

Do you have an optimistic view of the future?

I do have an optimistic view of the future, but I think that a lot of work needs to be done in order to make sure that that’s going to happen. We can’t save the oceans and we can’t save the earth until we start working on ourselves because we are part of nature. I think a big part of that is just being kind to one another. That’s sort of the basis of how the world would be determined in the future.