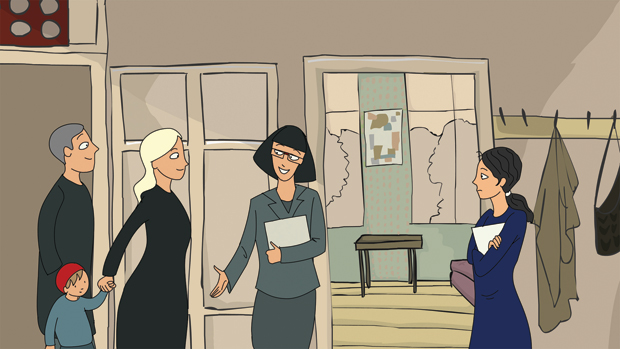 Gentrification – coming to a neighbourhood near you. Betongold (subtitled Wie die Finanzkrise in mein Wohnzimmer kam or “how the financial crisis entered my living room”) is Katrin Rothe’s personalised take on this trend, documenting the filmmaker’s own struggle to keep her Mitte apartment for 16 years in the face of a new landlord’s ambitions: luxury apartments and rocketing rents.

Rothe documents tenant resistance to legal threats, eviction notices and other forms of coercion but instead of just recounting the encounters with the new owner and his accomplices, she cleverly uses animation to show the scenes that she couldn’t film, adding a sense of immersion and narrative cohesion, which underlines the tale of personal tragedy.

Working along the same lines as the popular Mietrebellen, the film adds another cinematic voice to the growing discussion about the ever-pressing problem of gentrification and lack of affordable housing, and will be screened as a part of a three-day retrospective of Rothe’s work, dedicated to the experimental, prize-winning documentaries that have earned her a strong following.

Presented by Exberliner in cooperation with realeyz.tv, the screening on Aug 29 at 20:00 will be followed by a Q&A with the director and complimentary wine.