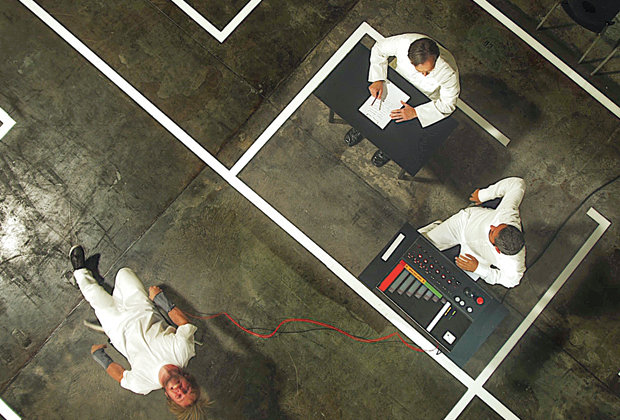 Stefan Ruzowitzky examines the evil behind the Holocaust with Das radikal Böse.

Ruzowitsky won an Oscar for his 2007 The Counterfeiters, which explored the conditions under which prisoners at Sachsenhausen were coerced into cooperating with Nazis: a movie which, in Ruzowitksy’s words, “didn’t work at all” in Germany. He returns now with a docudrama attempting to engage a younger audience both with the Holocaust and with the matrix of factors that could enable any one of us to commit the unthinkable.

What was the impetus for this film?

In a way, it’s a byproduct of my work for The Counterfeiters. When I was researching, I found this approach to Nazi crimes, which is not so much about who did what but rather this raising of psychoanalytical questions. Why did these people do it? How can ordinary men commit the most horrific crimes?

Goldhagen’s 1996 Hitler’s Willing Executioners was written partly in reaction to Browning’s 1993 Ordinary Men. You go back to Browning in your film. Why not Goldhagen?

It seems that Goldhagen’s theory that there is this specific German tradition of anti-Semitism isn’t around that much any more. One of his ‘proofs’ of German anti-Semitism was that in this particular situation of soldiers being offered the choice of not participating in killing civilians, very few made use of that choice. But I think it’s much more believable the way it’s presented in my movie. It’s explained by psychoanalysts who say: in this particular situation – far away from home – there is group pressure and the urge to conform. These are much more plausible explanations for what these men did back then than what Goldhagen said.

Choice is an important part of the processes shown in your film.

Yes. That’s really important for me. Whether in experiments or on the battlefield, people do have a choice. But very few said no. We love being part of the group, but once in a while it’s necessary to make those moral choices. Fortunately, there are always a few who make the right ones.

Das radikal Böse is originally a Kantian term. Do you agree with Kant that evil results from humans choosing evil over good?

We were referring to Hannah Arendt as well, and the banality of evil. Here we have the radical evil. What Arendt was talking about refers to people like Eichmann, pen-pushing perpetrators who committed incredible crimes from their desk, whereas the perpetrators I’m talking about are not banal. They were shooting children in the head with their own hands at just a few metres’ distance. I felt this was something different, something radical: the way Arendt defined evil as radical before she changed her mind – as something that just must not happen between human beings.

Reenacted colour scenes of a horrific phenomenon that’s only been previously documented in black and white make it all feel very close.

What I tried to achieve was not to make a historical documentary of events. I can’t do what Shoah did 35 years ago when the perpetrators were still around and you could confront them with their guilt. This is not the case anymore. Nowadays, it’s about inviting the younger generation to be interested in these things, to show them that this is not just history but social, political, psychological issues that all of us should be interested in. Things like this are still possible. We’re talking about the present.

Is this why you made your soldiers younger than the mostly middle-aged men in the battalion in Browning’s book?

Browning focused on this one police battalion with mainly older soldiers or police officers. People who had been socialised in the pre-Nazi era: grown-up people with families and jobs, not just products of Nazi propaganda. I don’t focus on this unit but on other platoons with younger soldiers, younger faces. I felt entitled to do that because it was important in terms of target audience. These are young people. We know that the pressure to conform amongst teenagers is biggest. They feel it much more strongly than older people.