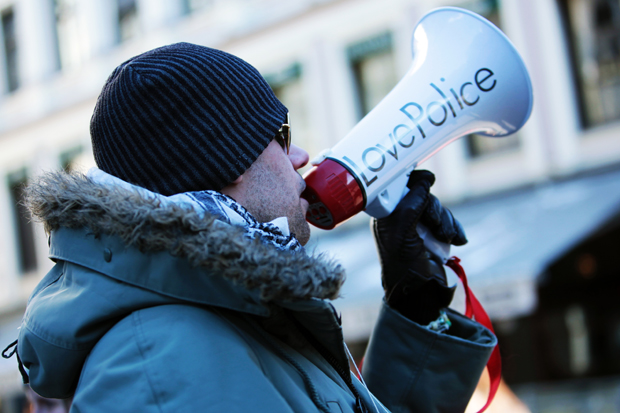 When Charles Veitch founded The Love Police, his aim was literally to get under people’s skin. Perhaps not so much under as onto people’s skin, doling out trademark hugs to guardians of the law and other upright members of communities large and small in an attempt to break down the “them and us” mentality of individuals caught on different sides of the social divide: corporate greed and fearful defense of privilege versus an awareness that global problems can only be overcome by concerted, united effort.

Formerly an employee in the financial sector, Veitch developed a large Youtube fan-base for videos that he made of Love Police actions. Marked by (mostly) friendly banter and an embrace-all ethic, his cooperation with and admiration for like-minded activists took him to hot spots in and around London (the Occupy occupation of London’s USB bank) but also to the G20 Toronto Summit, where he was arrested for refusing to identify himself.

Harald Baer’s film on The Love Police is not a master-class in documentary making. Much of it uses the found footage of Veitch’s own hand-held actions, interspersed with interviews with Veitch and his comrades-in-arms.

Like its subject, however, it is jumpy and honest. Veitch’s own retirement from activism to domesticity, triggered in part by a BBC-sponsored trip with like-minded conspiracy advocates to New York, where he was, in his own words, disabused of the wilder conspiracy claims, is given ample coverage and Veitch makes no attempt to dodge the bullets of “integrity loss” subsequently fired by other activists.

On November 18 at 8pm, The Love Police premieres at the Volksbühne. Director Baer and main protagonist Veitch will both be present to answer post-screening questions, after which the StereoMCs (who soundtracked the documentary) will play an exclusive DJ set in the Roter Salon.