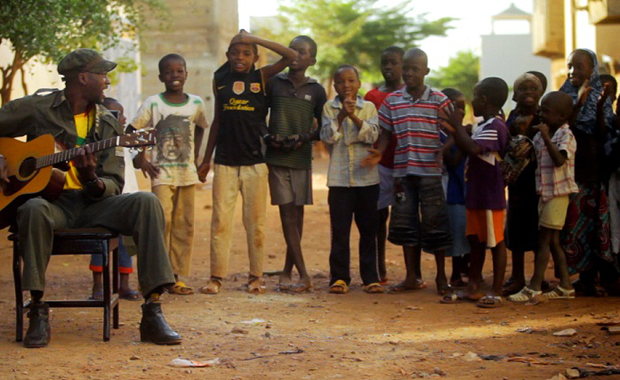 Berlinerin Kathryn Werntz documented a tumultuous time in Mali’s history as the producer of new film Sahel Calling. Despite its return to democracy on August 11, the country’s recent past makes for compelling watching.

Kathryn Werntz’s restlessness is evident. Part passionate activist, part journalist (occasionally contributing to Exberliner) and part unapologetic idealist, she splits her life between two expatriate existences in Senegal and Berlin. Working with director John Bosch, she produced Sahel Calling, inspired by the stories of diverse musicians who spoke out again the conflict, terror and oppression in Mali. Visually striking and psychologically raw, the film is both a celebration and a call to action: it functions as part of a wider project to tell the world about the empowering work of Malian musicians in the midst of suffering.

Now, as Mali welcomes a new president who will oversee the rebuilding of the country, Werntz is looking to build on the Sahel Calling project, bringing the story of Mali’s road towards democracy to an international audience.

A screening of the film, followed by a Q&A session with Kathryn and Malian singer-songwriter Ben Zabo, will be taking place on Wednesday, August 14 at Afrika Haus in Berlin.”

What inspired you to start the Sahel Calling project?

The trouble in Mali started in 2012, with the coup and everything that happened afterwards, and I was getting emails from friends who were up in the north telling me what was going on, saying to me: ‘These people are here, they’re saying they’re Al-Quaeda,’ telling me ‘My friend’s daughter has been raped and kidnapped.’ I was getting these emails, but there was nothing in the media. I started calling Deutsche Welle, Der Spiegel, The Guardian, CNN, everybody, saying, ‘There’s a problem in the north of Mali, do you want phone numbers and names and photographs?’ and everybody was like, ‘Nope, that’s not interesting.’ It was sort of sick, and that was the big push for me….

Why did you choose music as the focus of the film?

There are a lot of people out there who already love music from Mali and West Africa, and it’s so infectious and energetic. I was inspired by the local and regional musicians. I had heard stories that people were singing against the Islamists and I thought, wow, these people are risking their lives, even if they didn’t even look at it that way. They just felt they were doing what they had to do.

You manage to make the stories and the voices of the Malian musicians the primary focus of the film. It feels almost entirely unmediated by the documentary makers. Was that important?

When we started the project, France hadn’t intervened in the conflict yet, so the storyline in our head was, ‘What are musicians doing to fight, because no one else is fighting?’ But by the time we got on the ground, there was a different story going on. The idea all along was that we want to tell other people’s stories with their voices, and that’s still what we stick to as how we work. The director and I never discussed it. It was not even a question that the documentary was not going to have us in it. I’ve gotten some really interesting comments; some people just don’t like it. We never considered that.

But you don’t want to be too paternalistic. You want people to speak for themselves.

Exactly. We spent months thinking about which questions we would ask and how to phrase the questions in an open way. We wanted the questions themselves to be objective. But we kept arguing about what to include. We have 60 hours of stories, which story do we tell? In that sense, of course our voices are in it because we chose which truth to put in there in terms of people’s interviews. We didn’t want to paint Mali as some unbelievable wonderful utopia, because it wasn’t and it isn’t.

It helped having such a diverse range of people that you spoke to, though.

That was completely intentional. It was actually very hard to find women, extremely difficult. We had a total of about 40 interviews and out of those I think seven were women. But we could have easily made a two hour documentary without women’s voices.

Did your experiences with the media make you even more careful to think about how to tell the story in a balanced, ethical way?

One thing which was very intentional when we started this project was to talk about the positive things that people were doing in their difficult situations. It was not about making people depressed, it was not about saying who was right or wrong, that was really clear for us. It was about telling the story. The people who were emailing me from Mali eventually started coming down out of the North because it got so bad, and they were Christians so they were specifically targeted. Within a month of coming down to Bamako, they were starting their own refugee programme, because they knew there was going to be this huge influx of people into the capital, Christian or not. They started setting up networking lines, they were doing everything they could to gather food together, get apartment space, clothing.

I loved the response of the reggae artist, Tiken Jah Fakoly, especially his song encouraging people to educate themselves about the conflict.

Tiken Jah is himself a refugee, he’s from Côte d’Ivoire. He was chased out because of his political songs and chose Mali as a home, and as soon as the conflict started there he started singing songs and making videos. He’s been through this once already, so he’s been supporting a lot of the musicians. I agree that he’s very academic about it; he wants people to go to school and talk about what’s happening. He’s also so well spoken. I’m just like, why don’t you run for president?

Was it easy to get these people to talk?

Many of the interviews we didn’t even plan. We arrived maybe three or four weeks after the war started and everyone was on this massive high, like, ‘France is here, we’re saved.’ So we’d go to talk to one of the musicians we knew, and then there’d be other musicians there or people would see us with a camera and come over. One guy we used in the film was this young rapper. He didn’t know he was going to be filmed that day and there he goes on a half an hour, well thought-out speech. Even the young rappers, boys age 16 or 17, they know their power in society, they think about these things.

Did you have a narrative for the film completely planned beforehand?

It was sort of improvised. Part of the problem of getting funding or getting a station to agree to air it is that everyone wanted the full storyboard, and we knew the scene, the people we were interviewing and our questions, but we didn’t know what would happen. This is not a one-off documentary about something that has happened; it was more journalistic than anything.

Sahel Calling is a very ambitious project. Have people been keen to get involved?

This whole thing has happened on less than €50,000, and that’s mostly because the film team didn’t get paid much. There’s a project team of about 10 people who have done tonnes of work for free, alongside other volunteers. A friend of a friend who worked at Facebook has let us use her monthly advertising allowance for six months. There are so many people who have made this happen. The credits in the film are about six minutes long – and that’s not everyone! I’ve shed a lot of tears over people’s generosity.

Are you planning another trip to Mali?

Yes, hopefully in October. We want to wait about two months after the elections [which took place on August 11] to go back, mainly for security reasons. We’re planning to visit the North this time. So we want to go back in October for two or three weeks to focus on three of the musicians, and then come out with a feature-length documentary in January that would look at the role of music in making democracy.