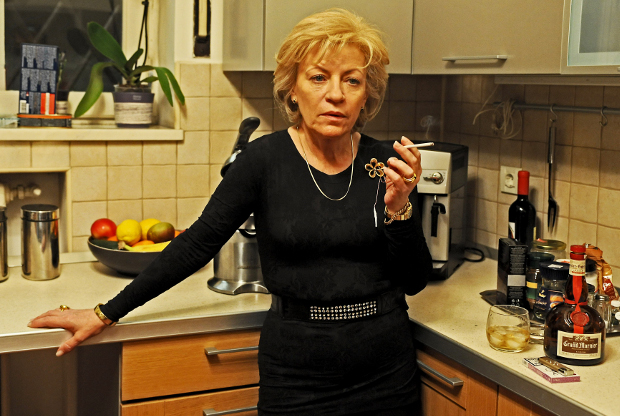 Romanian director Călin Peter Netzer hit the jackpot this year when his story about a dysfunctional mother-son relationship (in cinemas from May 23) won the Golden Bear for its portrayal of Cornelia and Barbu: an over possessive mother trying to protect her adult son from the consequences of killing a child in a motorway accident.

Can you tell us how you developed the story?

Razvan [Radulescu, co-screenwriter] and I talked about relationships to mothers, and that’s how the film came about.

But this isn’t a film about the relationship with your mother?

In part, yes. It was difficult for me to make. Subconsciously, I was worried about making a film about a mother that would be seen by the general public. At times, I wanted to abandon the project. It was so extreme, so difficult. I had a feeling that’s hard to express. I was depressed. Nothing seemed right. Normally I’m a control freak: this became an exercise in loss of control.

How did your mother react?

She thinks it’s an homage to her. Which is good. For me.

So it’s personal. But is it also about a universal kind of Oedipal relationship or one that’s specific to Romania?

It’s a film about a universal Oedipal relationship. That’s why the film is comprehensible to so many people. Of course, the fact that she’s a Romanian mother also plays a role. She’s a bit more excessive than normal. I think mentalities and habits are a bit more excessive in Romania than in Western or Central Europe.

Probably because the people are a mixture of Balkan and Latin peoples. Then we had the whole experience with communism. Cornelia’s marriage is dysfunctional, for example, but the fact that she and her husband haven’t divorced and stayed together for the child: this is something my generation heard a lot and it’s all linked to the communist era. That’s how it was back then. In the West, they’d have gotten divorced.

Is your generation in the process of emancipating itself from these constraints? Is it an appeal to get up and do something?

I don’t know if it’s not too late for that. It’s hard for people to change once they reach a certain age. I was thinking more in terms of an alarm bell.

So it’s more about the formal language of showing, and about inviting dialogue, than about didactics?

Yes, although it wasn’t that clear to me during shooting. I became clear when I talked to people about the film and about their reactions. My intention really was just to make the film. Then people said to me: this is not a film for the general public. It’s pure art house. And that’s what I thought myself. I was surprised by its success, with the Romanian middle classes. I felt that it must be difficult to watch.

Back to Oedipus: Barbu’s father is the absent Oedipal father and contrasts with the father of the victim who is poor but stronger…

That’s because the victim’s family is psychologically richer, happier. This was the contrast. But that last scene (in which they meet) plays out at the level of human interaction between one mother who lost her son (in the accident) and the other, also talking about a child who is practically ‘dead’ to her: Barbu – she talks about him in the past tense.

Why did you silence that final dialogue between the perpetrator, Barbu, and the victim’s father? We see them talking, but don’t hear anything.

There was a dialogue, in the script. He actually asks for forgiveness – Cornelia pushes him to. But during shooting, on set, I noticed that it’s better if it stays ‘off’. It’s more effective this way.

Practically every scene takes place in a closed space: police stations, cars, flats. Did you consciously exclude scenes that took place in the open?

There was originally a final outdoor scene in which Barbu actually picks up his car from the police station and says good-bye to his mother. I took that out. I took out a lot of scenes – 40 or 50 minutes worth of scenes. It became a conscious aesthetic decision to keep it close, with an unstable camera, as if one were in there with the protagonists.

So handheld camera throughout?

It’s all done with handheld camera. I tried to stay as objective as possible, because the subject is too close. The cameraman and I worked for two months prior to shooting, setting up at other locations: we threw all that away. When we were shooting, I set up the mise-en-scène and then just let him shoot, based on his feeling for the material. The actors knew what to do. After the first takes, I began to edit. The rule was to have no rule.

With a 126-page script, how much liberty did the actors have?

We spent a lot of time beforehand, discussing. We only had 30 days to shoot and moved incredibly quickly. We worked every day for 14, 15 hours. Sometimes we tried to improvise but it didn’t work well. Partly because Luminita (Gheorghiu), who plays Cornelia, hadn’t acted that kind of ‘society lady’ role before.

Do you consider yourself part of the New Wave Romanian cinema?

I think so. I hope so. But I’ve said before that we need to do something different, get more personal in terms of aesthetic. In Child’s Pose, the first step that I took was to move away from this minimalism, from the long takes used by directors such as Porumboiu, Puiu, Mungiu – that I used in my first film: people want to see something new, and we want to get people back into the cinemas. Otherwise we’re going to end up making films for festivals. In Bucharest, the situation is different but some major cities only have one (sometimes un-renovated) cinema.

How did the film go down in Romania? Was the Oedipal reference clear?

The film was very successful in Romania – 100,000 viewers, 10 times the average for films like this.  And Romanian audiences also saw it from this (Oedipal) perspective. And even when they didn’t – they actually did.

Child’s Pose opens in Berlin cinemas on May 23. Check our OV search engine for cinemas and showtimes.