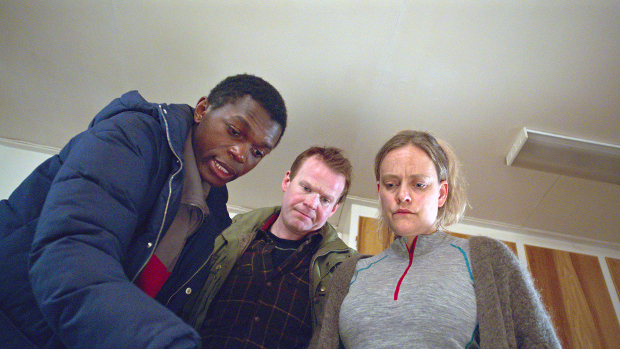 Welcome to Norway! is a timely and provocative black comedy about a middle-aged chancer, played by Anders Baasmo Christiansen, who concocts an ill-thought-out plan to save his family’s run-down ski resort by turning it into a reception centre for refugees. Darkly humorous but ultimately insightful and compassionate, it’s an impressive balancing act on the part of director Rune Denstad Langlo. We sat down with the director to discuss his successful first foray into comedy.

What inspired you to write this story?

I watched a documentary 10 years ago about this character opening a reception centre in northern Norway in a defunct ski resort. It was tragic, but nevertheless funny because this guy was a complete mess. And then I was shooting a documentary myself in a centre up in northern Norway in the middle of nowhere and I was surprised by how warm and humorous the refugees were. This contrast was very appealing to me; to make a comedy out of a tragic subject.

Did you always intend to deal with the issue of refugees in Norway?

The film is more about this average Norwegian guy, who opens a reception centre in the hope of becoming rich. He thinks that this is a great plan – that it’s going to save his hotel and his family. So, the film is about this guy and what happens as soon as he is responsible for all these people.

Why did you decide to make a comedy about such a politically charged topic?

It’s about a system in Norway that doesn’t work. These reception centers are not an industry, but they are part of a system. People get payed by the government to host refugees. It’s better now than it was five years ago, when I started writing the script. There were a lot of private individuals who tried to take advantage of this system, hosting people in awful places.

Now, if you have a system that doesn’t work, that’s good comedic material. Add to that a bunch of people with 20 different nationalities and you’ll inevitably end up with a lot of funny situations. So I did a lot of research. I was reading reports from the migration directorate and also the rules for mounting a reception center. For instance, they have to have the facilities to provide refugees with Norwegian classes. As I was writing the script I was imagining what would happen if these characters had a language lesson, or what would happen when they had their cooperation council meetings, and so on. The comedy is situational and character driven rather than satirical.

How did you manage to make the hotel look so lived in?

The hotel was completely empty when we took it over. The place had been a hotel in the 1950s and then became an institution for alcoholics. So it looked like a hospital. It had a very neutral and boring look. Our production designer rebuilt it. It took her about two months to redesign all the rooms. It was definitely important to show that it had been something else before the place was converted.

How big a part does the geography of a place play in comedy?

It plays a very important role. I think this location was perfect for the comedic material. It looked strange enough, and also the fact that it was in the middle of the mountains, that there was nobody around apart from a small train station. It was also important that it was in winter. Things such as the hotel, how shabby it is, and the bad weather have the function of being antagonists to the main character.

How did you tackle writing parts for the refugees? How do you get under the skin of these people, especially when you’re dealing with comedy?

In the original script the character of Abedi was more of a gangster. He was street smart and much harder. But when I cast Olivier Mukata I changed the part. I used a lot of him. I used a lot of his background, changing his nationality and even his temperament. Olivier is much more easy-going. He’s warm, funny, smart. I always try to use the actors as an inspiration for the parts they’re playing.

So when does that happen? Do you have a rehearsal period?

We usually meet over a two-month period prior to the first day of shooting. We talk together about back story and changing things. I write my own scripts so I’m prepared in that way. I know the script very well. But this is new to me in that it’s an ensemble comedy. I wanted different types of actors both new and old from film and stage. I wanted this mixture: different types of people.

Do you think Norwegian comedy can be appreciated abroad? Your film deals with a lot of dark humour. Are you worried that it might not translate as well in other countries?

That’s what’s exciting every time I release a film. Who is going to laugh? Who is going to like it? I don’t know. In this film we had about 24 nationalities and I wanted everyone to like the script and I made sure to talk to different people, from refugees to actors, to get the most out of the material.

How do you make sure you squeeze all the comedic potential out of a specific scene?

In this film a lot of the comedy was already in the script. Nothing was improvised. I did change a couple of lines depending on what actors felt most comfortable with, but most of what you see is what I wrote. There were 70 scenes in total and I wrote the script over a period of two years. So, it took me on average 10 days to write each scene. By which I mean it was a very laborious task. Think about this: there was only one scene from the first draft that made it to the final film. Now whenever I write, I find myself thinking “but, you’re going to throw this away!”

Do certain genres interest you more than others? Or are you happy writing comedies?

There are elements of comedy in all of my films but this is my first comedy film. So I guess I have a sense of humor, but it doesn’t mean that my next film will also be a comedy. I actually have two projects that I’m working on at the moment. One of them is very dark and the other is very light. So when I’m depressed I go to one and when I find myself a little happier I go to the other. I’m not sure which project will win.

What kind of direction did you give Anders when he was preparing for this role?

What I wanted in this film was for Anders to be a little nervous, a little unprepared. So he didn’t prepare. We went through the script once and I wouldn’t let him meet any of the other actors. So the first day we were shooting a scene with all the refugees and he was really shaking. You can see it in some of the scenes. There is that realism.

I think that’s what’s so great about the film. That it plays with comedy in a truthful way, not trying to shy away from the uncomfortable.

Comedy often tends to exaggerate situations. It might try to make something funnier than it actually is, which is why I made sure that my film had no punchlines.