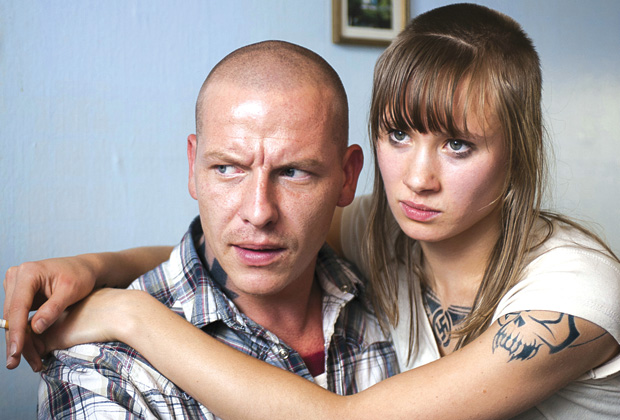 David Wnendt, director of Kriegerin, spent months in Brandenburg hanging out with right-wing gangs and talking to women involved in the neo-Nazi scene. What he saw and heard there convinced him that a film was to be made.

Instead of opting for a documentary, he looked for and found two astonishing young actresses, putting faces to a phenomenon that we ignore at our peril and showing what, if anything, can break the cycle of abuse and hopelessness.

What got you interested in the subject of neo-Nazism and white power?

Just after high school, I came to Berlin and did a photo project on old industrial sites in Brandenburg and Saxony. Taking photos in villages and small towns, I noticed that many young people had extremely short hair and were wearing the kind of clothing associated with the extreme right. It shocked me.

When I was at school, one single skinhead would have caused a scandal, parent-teacher conferences would have been convoked, etc. There, just one hour’s drive from Berlin, it was ‘normal’, part of local culture. I was baffled.

You present a situation, no solutions. The girl who escapes does so on the basis of character strength, not self-help groups.

There is no easy solution. There is no positive example for these kids to follow. The parent generation is either apolitical or anti-political.

Even now, I couldn’t say what the solution is. But ignoring it, as we did before the most recent killings, is not an option. I wanted to create awareness. These kids are not isolated. They exist in families and in society.

One of their problems is communication. Or lack of it…

This was not my starting point. It’s something you may achieve during the process of scriptwriting, of working with a particular actress. It’s something that develops and which you hope will be understood by the audience as one of the real problems addressed by the film.

The film has some pretty violent moments. How aware were you of treading a fine line between showing too much violence and showing too little?

With this kind of film, you always have to strike a balance. If you show too little, there’s a danger that people from the extreme right will appear too nice, too harmless: young people, partying, what’s so bad about that? But the reality is that the violence shown in the film really exists.

People get beaten up. We know that foreigners are being killed. It’s an important part of this whole youth subculture that I spent years researching. So the violence has to be shown and in a way that may disturb the audience. Though there isn’t that much close-up violence in the film. No blood, no noses being broken in slow motion, or fists hitting faces.

Did you make a conscious effort to de-stylise the violence? To take it out of the action mode?

Yes. In action films, violence is choreographed, like dance. This is something I didn’t want or need for this film. Of course I had my own kind of choreography, there has to be control, but the point here is not to show technique but to provide a rough, documentary feeling.

Domestic violence is also an issue. The kids are not hit, but they are emotionally and verbally abused. One kind of violence leads to another.

Sure. For me, it was important to show one possible genesis for violence, to provide explanations for right-wing extremism. Families are important. Prior to making the film, I did a lot of research, interviews with women in the scene, and domestic abuse came up again and again. They were very different women, but this was the common denominator.

Are you aware that your film might attract extreme right-wing viewers?

This is the problem you always face when doing this kind of movie. American History X, for example, is an anti-neo-Nazi film, but it’s a favourite in the right-wing youth culture scene.

The same applies to anti-war films. American soldiers, German soldiers… they really like Apocalypse Now, because they see it differently. They don’t see the loss of soul, or humanity. For them, it’s about explosions and music.

I made sure that Kriegerin has a clear message: it’s against right-wing ideology. We had screenings with school classes, which proved to me that it does work. Provocative questions from the teacher along the lines of “It’s just kids partying, don’t you want to be part of this community?” immediately got negative responses from the kids, who saw that there is no real sense of community, just in-fighting and mobbing.

Despite everything, the film has poetic moments: the use of the waves, for example, crashing onto the beach at the beginning and the end intimates both a circle of violence and the possibility of release.

I wanted to make a film that was more than just about violence, that wasn’t just a political statement. You can strive for poetry, but it’s hard to capture and hard to construct.

This was one of the reasons why I chose to make a fiction film and not a documentary: feature films provide more potential to create these moments. Whether they come off is up to the audience.

Kriegerin opens in Berlin on January 19. Go to here for show times.