Join Exberliner and Soundwatch film festival on Thursday, November 16, 7:30pm at Lichtblick Kino for the Berlin premiere of Queercore with Walter Crasshole (film researcher and interviewer) and Constanza Godoy (assistant director) for a Q&A.

Following up last year’s debut feature Desire Will Set You Free, director Yony Leyser returns with Queercore: How To Punk A Revolution, a documentary that chronicles the queer roots of punk through a cultural and revolutionary movement which rejected the status quo of both the straight and gay world. Brimming with archival footage and enlightening talking-head interviews with Bruce LaBruce, John Waters, Scott Treleaven and many more, the film comprehensively takes you from the queercore scene’s underground beginnings in the mid-1980s with zines, through the 1990s with bands like Pansy Division and Team Drensch, to modern-day artists like Peaches and Beth Ditto.

Why choose queercore for your second documentary?

I like to do films about rebels, particularly queer rebels. I had the idea for queercore a long time ago, just after my first film [William S. Burroughs: A Man Within]. I went on this month-long tour around the US with a queer performance art group called Sister Spit. We were playing these tiny towns and I encountered little queer punk scenes, and met interesting people, and thought that the queercore scene hadn’t really been documented before. I thought it would be a good idea to come back to the subject, as I’d made a zine and lived in punk houses that also threw shows in Chicago, where I grew up as a teenager.

A striking aspect of the documentary is the sheer wealth of archival material and the big-name interviewees. How did you go about interviewing all these people?

Because it’s my third film, it was easier to contact these people. For my first film, I was just a college student with a press pass for my university’s paper, sneaking backstage or lying about what I was doing. The first part of this film was just me and the camera, and once the funding kicked in, it was also easier. But people wanted to be in it – we interviewed about 60 people for the film, even if a lot of them didn’t make it in.

Some interviewees are very self-reflexive and humorous. Do you think that humour is a requisite for a movement like queercore to work?

Humour and satire are not only powerful tools but make things accessible for everybody to engage in. Bruce LaBruce’s films are hilariously funny, William Burrough’s books are very funny. Some people sometimes don’t realise that and take them too seriously. I consider all three of my films to be comedies. Queercore itself was funny, which is why it was so powerful. I personally have a hard time paying attention to things that aren’t a little bit funny, and I have a hard time having conversations with people who take themselves too seriously.

Yes. And the animations in the film were made to look like zines and were all handmade, or cut out from the original zines. I didn’t want computer-generated, typically clean animation.

The film has a certain Berlin feel to it, not least because so many interviewees are part of the Berlin scene, like Bruce LaBruce and Peaches…

I think all my work has a Berlin feel. The aesthetic is a part of my aesthetic now. Initially, I wanted the story to take place more in Berlin. We interviewed German bands like Die Tödliche Doris and Malaria! and there was a queer squat here called Tuntenhaus that Bruce La Bruce and G.B. Jones visited and traded zines back-and-forth in. But these bands weren’t really queercore – it happened at the same time, but it was different. I decided to keep it in North America, but even if it was too separate and there wasn’t always a connection, as Wolfgang Müller says, the first punk bar in Kreuzberg was a gay punk bar.

Can you tell me more about the film’s poster, designed by Stefan Fähler? 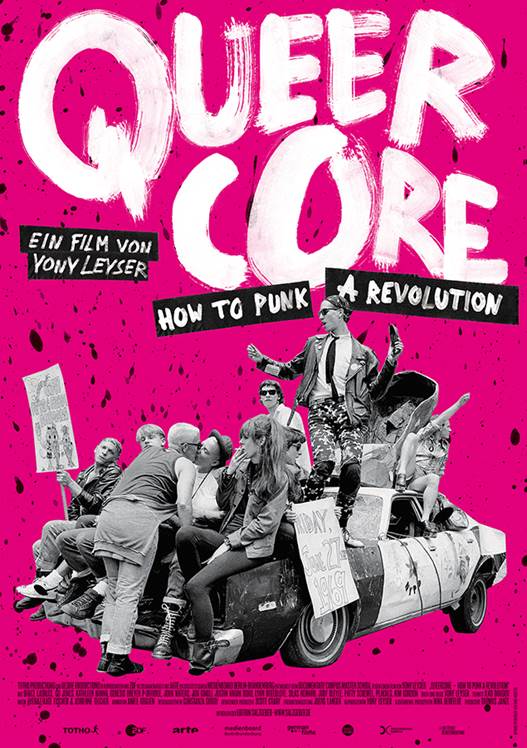 I just love that image. It was taken at the [San Francisco] Pride Parade in 1989 when queercore just got its boom, when all the punks took over a cop car and smashed it with high heels and baseball bats. It was such a radical thing to imagine seeing, and you have G.B. Jones sitting there on the front… Stefan was a big fan of the bands and his style is very queercore, which made him the perfect person to design the poster.

The film has been to Sheffield Doc Festival and the Viennale – what have the reactions been like?

I don’t know if it’s going to be the most commercially successful, but it’s been the best reaction that I’ve had for any of my films. It’s interesting because a lot of the programmers of festivals think: “Oh, it’s a niche film – we really like it, but we’re not sure if people are going to see it…” People love to say “niche” when they’re afraid of things, but is it more niche than a film about a Nigerian preacher that could win an Academy Award? I don’t know. It’s all about the way you tell the story and what angle you decide to take.

Was it difficult to strike a balance, to not make it exclusively a doc for music fans, nor one tailored exclusively to the LGBTQ community?

Well, it’s in the zeitgeist now, but my goal was to have a critical view on society and to talk about social issues rather than pander to a gay audience. So I’m glad it’s having success with a wider audience.