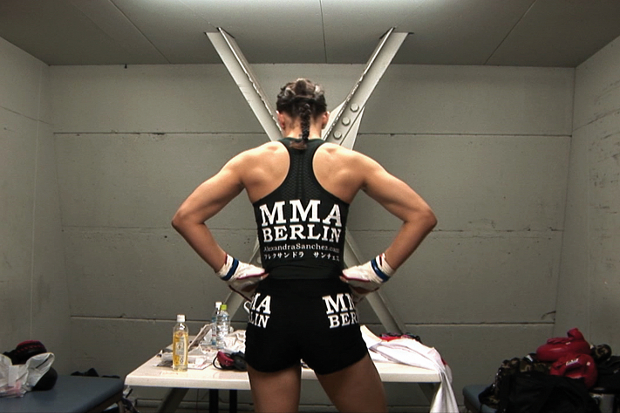 While focussing on four protagonists, from a new-to-the-sport surgeon to a female MMA profi, Schäuffelen showcases a very misunderstood sport and digs deep into the human psyche, forcing us to ask the question, Warum kämpft der Mensch? (Why does man fight?)

See more about the film, including the trailer at realeyz.tv.

Up until now you’ve worked mostly on fictitious made-for-TV movies and TV shows. Was there anything you liked better about making a documentary?

Since I chose to produce the film with very few people and mostly on my own, I had complete freedom and I could go the way of trial and error without anyone breathing down my neck [laughs]. That was very beautiful having that freedom.

The world of MMA is still quite underground in Berlin. How did you get interested in making a documentary on the subject?

MMA is actually underground in all of Germany. UFC (Ultimate Fighting Championship, the professional MMA promotional organisation) is even forbidden from German television. However, I have always been a very keen martial artist and after first doing judo, karate, boxing and jujitsu, one day my path led to mixed martial arts. I couldn’t even really say why, but basically I wanted to do the most extreme thing. And I enjoyed it very much. And I always asked myself why I enjoyed it so much. This movie was a way of finding my own answer to this question.

Why is it that Germany is so against MMA on television?

I think it’s a very German, if not European, thing. We still have, especially in Germany, an understandable problem with accepting violence. So there is a prejudice that watching fights like this could motivate young people to do street fighting, which you could be argued about endlessly. As a result it isn’t accepted as an athletic sport. It’s difficult. There have been many discussions on television and in the media about this, with pros and cons. But I think mentality is a big thing.

The world of combat sports tends to not have many women involved, but two of Full Contact’s main characters are female…

It’s a specialty of this club that they have very civilised, middle class members. You don’t have any bouncers or street fighters or aggressive, tattooed people there; you have doctors, students of literature and so forth. They also have quite a number of women training there, so I thought the ratio to have two men and two women [as central figures] would be interesting. That way it isn’t like coming into a world of very macho, testosterone-fuelled guys; it’s a place where you can discuss medicine and law with your opponent after beating them to the ground. My documentary doesn’t tell the typical underdog story. It’s rather a story of middle-class, educated people doing underdog sports.

When you were filming, where there any injuries that were too gruesome to show audiences?

I saw bad injuries, but I didn’t film them and they didn’t happen to my protagonists. I didn’t want to have anything sensational or any stereotypes in my documentary because they would have brought a strong energy into it and maybe even bias of opinion or judgment. And I wanted it to be about lifestyle, about love, about disappointment, about partnership and relations, about breaking up and getting married. That’s in the foreground and the sport is in the background.

So, how do you think the film represents Berlin? Could it have been made anywhere else?

I believe it goes hand-in-hand with the zeitgeist of Berlin. If you went to a smaller town where they had MMA, you would have a completely different milieu, I believe. But Berlin is such a melting pot and such a mixture of personalities and cultures and ways of living. It really is a Berlin thing to have these people doing a sport who are in conflict with the cliché.

You were able to portray the often extreme world of MMA in a very un-biased fashion, but what are your personal opinions when it comes to the sport?

I’m still searching for the answer. Why do we enjoy combat in a civilised surrounding? And though I think [MMA] should be accepted as a sport, I’m not trying to fight for acceptance in our society because I’m not sure if I could stand behind it. Of course I want my children someday to have experience with martial arts, maybe judo or jujitsu, just to be able to fall on the ground without hurting themselves or to be able to cope with conflict situations, but I’m not sure if I’d want them to do MMA [laughs].