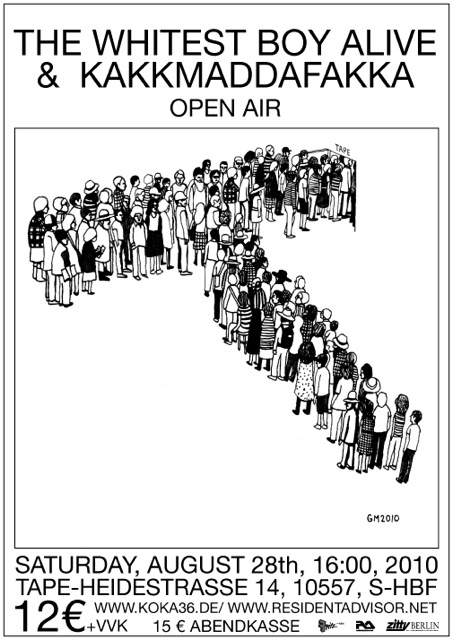 For many, the end of August denotes the end of summer, and I suppose it’s for this reason that there are so many one-off events scheduled this weekend. You’d do well to resist the temptation of having a duvet day and put on a rain jacket to say Auf Wiedersehen to summer.

It’s Bring-Your-Own-Music on Friday night with 900 Seconds (Fri, Aug 27 @ KIM), where budding DJs each get the guts of three tracks played. Although it sounds like fun, I can’t help but warn that the dance floor will probably be killed multiple times with this initiative… especially if those budding DJs decide to play their own never-before-heard tracks!

Saturday going into Sunday is a day of bliss for Trendy Wendys and Culture Vultures alike. Summer.Pop.Shopping (Fri, Aug 27 & Sat, Aug 28 @ Postbahnhof) is not just about all the designer clothes – which are lifted from a lot of Berlin’s bootiful boutiques – but also about the graphic design prints, the jewellery, comics, and the wonderfully weird products on sale.

Amongst the museums to venture through (until 2am!) as part of Lange Nacht der Museen (Sat, Aug 28) is Temporäre Kunsthalle. It’s closing on August 31, so it’s a last chance to see the “white cube” itself, as well as FischGrätenMelkStand, a playful exhibition that shows works from 63 artists using a range of media formats. (Though we hear the real fun’s on Monday night…)

While I’m on the topic of exhibitions, if you’re feeling a bit on the frisky side after Nudes’ long stint (Sat, Aug 28 @ Camera Work), you might be interested in keeping up the momentum with Dr.Sketchy’s Anti-Art Class (Sat, Aug 28 @ White Trash) – a Burlesque-style life drawing class. Tassle do nicely alright.

Aside from the music spectacles dotted throughout Berlin’s museums on Saturday night, The Whitest Boy Alive (Sat, Aug 28 @ Tape Club), fronted by Erlend Øye (also of King’s Of Convenience fame), plays an outdoor gig. It’s a must-see for indie-pop lovers and is probably one of the last outdoor events you’ll feel compelled to go to this year, what with the dwindling weather and all.

Pedalling on to the festival wagon this weekend is Fahrrad Kino (Sun, Aug 29 @ Jacki Terrasse). The bikers will love this one – they’re showing lots of short films about bikes, no less, and there’s going to be some roller racing activities on site. R o l l e r    R a c i n g ! ! !

Spoilt for choice this weekend, we are.