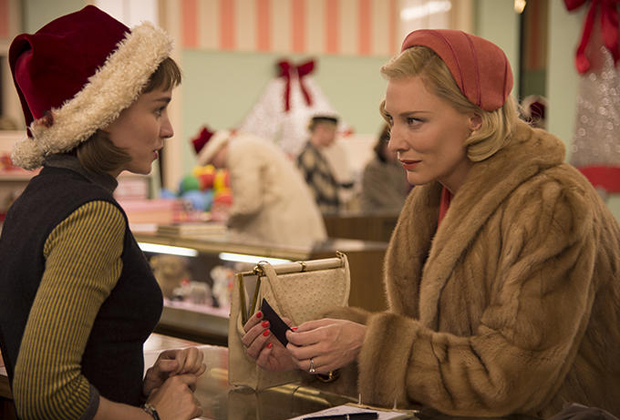 A perhaps accidental upside to the torturous accreditation-and-admission system at the Cannes Film Festival, as described previously, is that you make friends easily. Trapped in lines for hours on end with similar war stories to share and a natural alliance against those higher up in the hierarchy, there’s no lack of conversation starters and a lot of time to kill.

On the day that American competition entry Carol was to first screen for press, the anxiety level around the Palais des Festivals was high. A beloved novel adapted by an established auteur starring Cate Blanchett, the movie was widely considered to be the hardest to get into thanks to sky-high anticipation. Journalists with review duties and regular cineasts alike had nightmares about leaving Cannes without having seen it. After some strategizing, I decided to skip the early evening showing at 7pm altogether and put all my chips on the late-night showing at 10pm. To maximize my chances, I arrived at the theater even before the earlier showing began, just to get a head start on those shut out from the first one and migrating over for a second try. (See? Strategizing.)

This meant of course close to 3 hours of waiting, for a film not even that long. But I was neither the first nor the last one to commit to the idea. A handful of truly die-hard fans were already milling about the tiny theater Bazin when I got there, and many more soon joined. Words of excitement, doubt, fear and encouragement were exchanged between those of us at the very front of the queue, followed by discussions about the highlights and bombs so far. Before long, it felt like we were just a group of friends chatting in some cafe and not crazy people camping out for a movie.

Our tenacity finally paid off and the whole happy bunch got to see Cate Blanchett sweep Rooney Mara off her feet in sumptuous 1950s flair. Better still, the friendship arising from this instant camaraderie continued even after the credits rolled. A couple of days later, my newfound friend Sophie invited me to a party hosted by the film magazine she works for, Little White Lies, and I got to hang out with all these lovely film freaks again, meeting more along the way. Everyone looked exhausted by the Cannes experience and stressed out by outstanding writing assignments, but with the cool beats and mixture of languages flowing around the hip little location, the relaxed atmosphere and the free-flowing beer, the scene could have passed for a chilled Friday night out at a Neukölln bar.

Cannes is of course known for much more lavish parties, which light up the Croisette every single night. This year, yours truly managed to get a grand total of one invitation, namely to Taiwan Night hosted by his native country. Although it probably wasn’t the fanciest, the palm tree-lined check-in point and the open bar by the beach were still pretty cool. Legendary Taiwanese director Hou Hsiao-Hsien was there with his team behind the competition title The Assassin, and it was nice to see other renowned filmmakers from China and Japan also present to pay their respects. With a dusk-coloured coastline as background and gentle sea breeze air-conditioning the festivities, one must admit there’s something effortlessly glamorous about Cannes that the steely, snowy Berlinale can’t quite match.

All the queuing, bonding and partying aside, one comes to Cannes to see films. And that I’ve certainly been doing. With over 30 titles seen – by the most celebrated auteurs from around the world, no less – a verdict on the selection this year shall be delivered next.