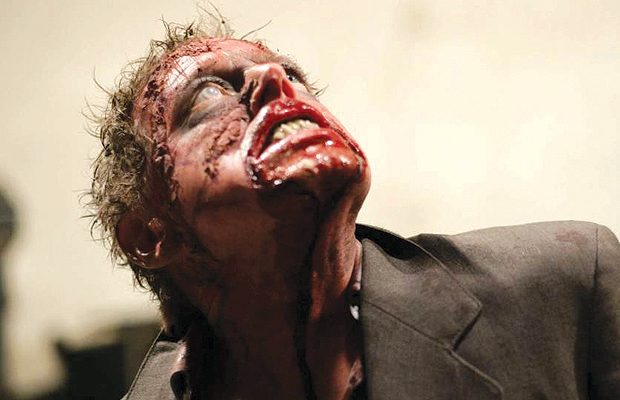 In Marvin Kren’s new film, zombies invade Berlin. Rammbock isn’t the first zombie flick to be located and shot here: Lamberto Bava took the first stab at it with 1985’s Demons, and Bruce LaBruce stabbed again with 2008’s Otto; or Up with Dead People.

But the film manages to have all the conventions and thrills one expects from the genre, as well as an unexpectedly engrossing love story set in apocalyptic Berlin.

Rammbock premiered at Central Kino on September 9, with a Q&A with Kren and screenwriter Benjamin Hessler (moderated by EXB’s very own Walter Crasshole!).

Why Rammbock? Why did you decide to make another zombie film?

Well, Benjamin Hessler – he’s the screenplay author – and I are big zombie fans! And Hessler had this vision when he couldn’t sleep at night: what would happen if he was locked up in this apartment, without food, and there was a zombie-plague raging outside? He’s hungry, so he has the idea to make a Rammbock – a battering ram – out of furniture. And he uses it to break into his neighbor’s flat to get food. That was the basic, ‘new’ idea behind the whole thing.

You’re from Hamburg, but the film is set in Berlin. Is there something about Berlin that lends itself to the zombie genre?

It’s actually the production company that wanted to do it in Berlin… but it ended up being very good, because Berlin is a very sad, crazy town – a frightening city. There’s something emotionally charged about Berlin and the people are very rough. It’s a good set-up for a German zombie film.

The main characters are not Berliners, not even German… why?

It’s a very standard idea, but it’s always nice to tell the story of someone who’s fresh, who’s new, who doesn’t know the city. That that’s his weak point, somehow.

But the other thing is that I was just fascinated by Michael Fuith. When I first saw him, I immediately thought: “This is the guy.” He’s Austrian, so he couldn’t play a Berliner: he has a strong accent and people would have noticed.

What’s interesting about Fuith is that physically, he’s Mr. Average…

That was very important for me. I thought it would be so much more interesting if we put a really ordinary guy in there. People can identify with the story more. It’s more of an adventure in our heads if we think, “This could be anybody.”

When it comes to actors, I always go for talent over looks and if you look at Michael’s eyes, you see the saddest eyes in the world. That was perfect. He looks out over Berlin and he’s sad and Berlin is even sadder. And that’s exactly what we wanted to achieve.

Rammbock is also a love story. It has an uplifting ending, in a very twisted way. The main character, Michael, does get what he came for, just not in the way he expected…

We wanted to do a zombie film and we very quickly came up with the basic story, but then we realized it was just another zombie flick. And we thought, “Where are we in the story? Where is the personal side of it?” So we decided to add something that everyone can identify with, and that’s love, of course.

The idea was that Michael looks out of Gabi’s [his girlfriend’s] apartment to the other homes and he sees other love stories of sorts. He sees this brother and sister, and how the sister suffers for the brother; he sees a lonely man who has no one. Somehow, we always try to reflect love out of his perspective.

Zombie films are often metaphorical. Is being a zombie a metaphor for being in love?

Yeah, why not? It was very important to us; there were so many great zombie films out there – for example, George A. Romero’s – and they always end badly. You always feel bad after seeing one. It was important to us to make it a good ending, somehow – a weird ending. Political stuff wasn’t really important to us.

Rammbock is only 60 minutes long. This is perfect for a zombie film because the concept can sometimes wear thin.

Well, of course money issues spoke here, but I’m a big fan of American TV series, and The Sopranos and all that stuff is always an hour. So it was perfect! I think the future of filmmaking could be in making films shorter and shorter. The kids can’t concentrate for very long anymore: it’s the generation that watches five YouTube videos at the same time. They want to have one quick look and get to another one.

Are zombies an expression of our Zeitgeist?

In everyday news, we get these messages that the world will end soon, that the end is near – tsunamis, 9/11, swine flu. It’s frightening, but somehow it’s also very exciting to think that the world is ending and to think about how to react to such a situation. It’s a very elementary feeling, and I think the zombie genre supplements it.

It’s always fascinating to think about people as monsters, of ordinary man as a monster – a kind of democratic monster. Vampires are exclusive – werewolves, too – but everybody can be a zombie.