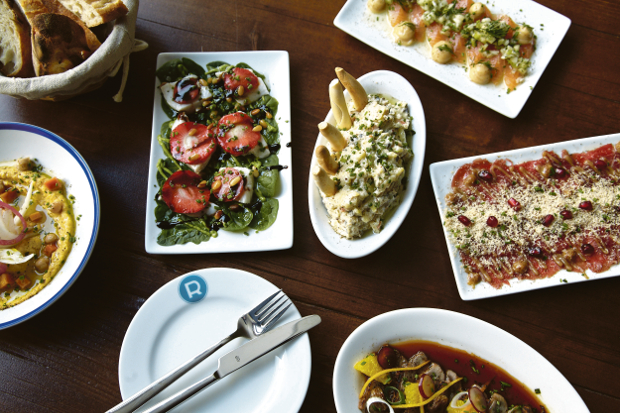 It’s hard not to be wary of actor-owned restaurants, and it’s hard not to hate the way everyone flocks to them. So we rolled our eyes a bit when we heard German actor Daniel Brühl (of Goodbye Lenin and Captain America fame) was following up his 2011-opened Kreuzberg tapas restaurant Bar Raval with another one, Bar Gracia in Prenzlauer Berg. Granted, he’s half-Spanish on his mum’s side. But as for his comparison of Helmholtzkiez to Barcelona’s Gracia neighbourhood, with its steep, narrow streets and balmy weather… we suppose he means the gentrified vibe of middle-aged hipster families who appreciate expensive olive oil. Regardless, the zombie hordes have lined up at Bar Gracia from day one. So what’s it like? It doesn’t feel like a Spanish tapas bar, or a Catalan one for that matter. Inhabiting the expansive space of former corner cafe The Sands, it’s just too big, but still tries to be “northern European” cosy – Spaniards hardly ever dim the lights and put candles on the tables!

The food is good enough, if you stick with the classics. The slightly crispy patatas bravas (€5) don’t taste microwaved even though they probably are, and the spicy sofrito and tangy aioli atop them are done right. As are the Andalusian-style breaded calamari rings (€7.50), as fresh as you’re gonna get thousands of kilometres from the nearest squid habitat – but is there any point in adding kimchi to the accompanying mayonnaise? Leaving the comfort zone, we encountered fanciful, delicate dishes like braised beef cheeks (€10.50) with Jerusalem artichokes and a garlicky sauce, or smoked aubergines (€7.50) served with goat cheese and black garlic, dribbled with honey. Both are delicious in a rather unimaginative way, though with portions so tiny, the entire dish is gone after about three bites.

Bar Gracia’s website promises “the diversity of Spanish tapas, without the clichés”, but when it comes to tapas, most Berliners want clichés that remind them of their last holiday, not hummus or red quinoa. And so next time, we’ll stick to a plate of Iberico ham (€10), some croquettes (€4) and an old-fashioned Spanish “Russian salad” (€5.20).

On that note, the best thing we tried might have been the dessert – an honest crema catalana (€5), which tasted exactly like any you’d get in Gracia. By that point, it was irrelevant whether Daniel Brühl was going to show up or not.