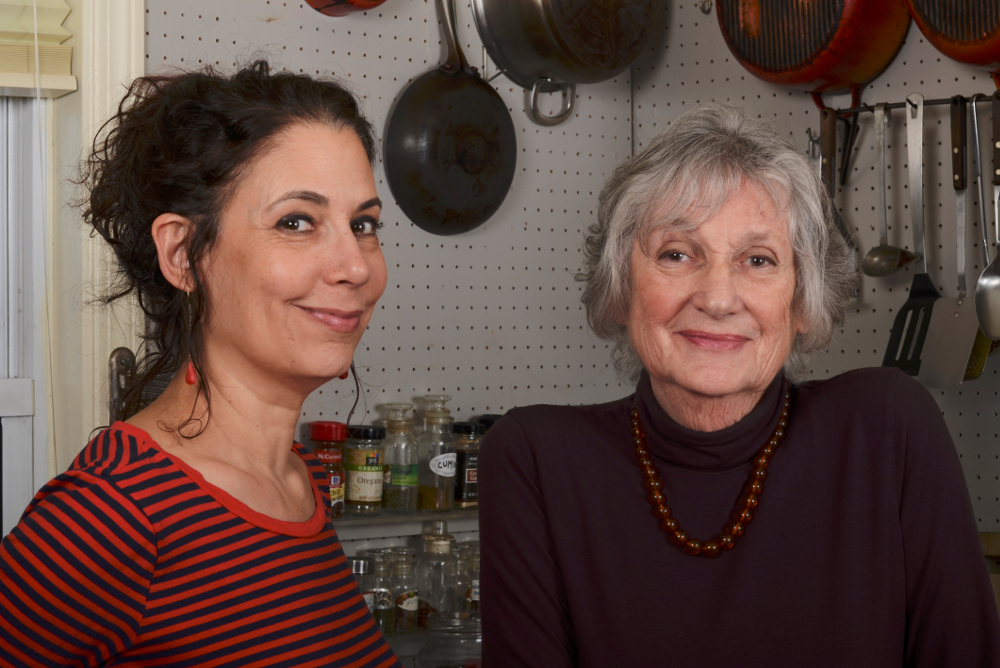 It’s not often that German-Jewish cuisine catches the spotlight – in fact, Gabrielle (Gaby) and Sonya Gropman’s The German-Jewish Cookbook: Recipes & History of a Cuisine is the very first cookbook dedicated to this culinary tradition. For the Gropmans, it is also a very personal retracing of the dishes Gaby grew up with: Born in Bamberg, Bavaria, in 1939, her family emigrated to the Washington Heights neighborhood of New York City, barely escaping the Holocaust. With them, they brought a plethora of German-Jewish recipes and traditions. Gaby’s daughter Sonya grew up largely eating the Eastern European food from her father’s side of the family. After teaching cooking classes and organising pop-up dinners in Berlin, the two found yet another way of sharing their passion for German-Jewish food and the traditions around it: Published in September, their book contains over 100 recipes, brought to life through rich illustrations, photographs, and interviews. We spoke to them about the goals behind the collection and their favorite German-Jewish dishes after a series of workshops here in Berlin this past spring. The book (in English) can be purchased at Shakespeare & Sons in Friedrichshain.

Your book is a detailed and quite personal record of recipes – why did you decide to publish it?

Sonya: Our primary intent was to preserve, document, and share some simple, everyday details that are the components of a culture. I think it is shocking that so many people here have never met a Jewish person, certainly not one with German origins like my mother. People know basically nothing about the everyday life of German Jews who lived in their communities. With our book we try to make Jewish life more tangible. What’s more real than food?

Gaby: Every time I come to Germany, I find it startling how these culinary traditions that were 600 or more years old basically don’t exist anymore. It’s like seeing what the Holocaust did. I am shook up by how we disappeared. Now there’s a new world of Jews. But the Jews that had been there just plain disappeared. And the food is part of that history. We wanted to bring some of it back.

Sonya: It is for people who are interested in German food, for people who are interested in Jewish food, and it’s also interesting for people who just want to discover a new cuisine that’s unfamiliar to them. Essentially, German-Jewish food is German food that Jews ate. Jewish food is a very nomadic thing because Jewish culture is very nomadic. Jews have settled all over the world and have eaten and adapted the food of wherever they have settled. So a lot of the dishes and recipes in our book are old-fashioned German dishes, things that people maybe remember their grandmother making. People frequently say to me: I don’t cook but there’s a lot of different things to read about in your book that I’m really interested in, like the whole first chapter being about history.

Are there any places you are aware of that sell the kind of food you are writing about?

Sonya: N o, for whatever reason we have not discovered any continuation of German-Jewish food from pre-War times in Berlin today. What we’ve seen of the Jewish food in Berlin tends to be Eastern European or Middle Eastern, like Israeli.

What are your favorite German-Jewish dishes – either from the book or beyond?

Sonya: Well, we have to mention Berches, because it’s such an important, iconic thing. Observant Jews from around the world will bless a bread on Friday night to start the Sabbath. Berches is a very different recipe from Challah. Another Jewish dish is Grünkern Suppe, which is also eaten by Germans, as well as by religious, observant Jews as a Sabbath dish. You would make it on Friday afternoon and then you would seal the pot. It would maybe have a little bit of meat, some bones, some vegetables, and then it would cook slowly overnight to be eaten for the midday meal the next day on Saturday. So that’s very specifically both Jewish and German. Some of our other favorite dishes are Krautsalat, which is a cabbage slaw that my great-grandmother made and that my mother loved – very simple but just perfect.

Anything for those of us with a sweet tooth?

Gaby: We have several quite unusual recipes that are specifically German-Jewish. Chremslach for example is a fritter for Passover. It’s fried Matzo with raisins and almonds and a nice sauce on top, either wine or raspberry. It’s very German and it’s very Jewish at the same time. We also have a cake that was made just for Passover by my grandmother, who was killed in the war. And my father went to great lengths to get the recipe. It’s called Kaiser Torte, a very grandiose name – emperor cake. But it’s a very simple and unusual thing, with a layer of apple in the middle of the dough. It’s something we love for Passover.

Sonya: Igel is the German word for hedgehog and there’s a cake decorated to look like a hedgehog, with lots of little almonds sticking out of it. My mother grew up getting it for her birthday and sometimes she made it for my birthday as well. It’s delicious and very sweet-looking, you know – a little animal!