Nobody ever needs an excuse to eat fried stuff, especially not right now. The fourth wave’s a-raging, the sun’s becoming ever more elusive and whether or not we’re on the verge of yet another lockdown, it’s safe to say a hellish winter lies ahead of us – might as well pack on a few pounds.

Just in case you were looking for an incentive, though, know that Sunday, November 28 marks the beginning of Hanukkah. Unfairly brushed off as the “Jewish Christmas”, this eight-day fest is in fact a literal celebration of oil during which you’re religiously mandated to consume as much golden-brown deliciousness as possible. (Why? Because many years ago, following yet another unsuccessful attempt to kill us, some Jews lit a lamp that stayed on for a very long time. Don’t ask, just eat.)

Traditional Hanukkah eats include potato latkes – aka Reibekuchen, aka Kartoffelpuffer – or sufganiyot, jelly donuts that bear more than a passing resemblance to good old Berliner Pfannkuchen. You can find the former at the legendary Hermannplatz street stand Pufferimbiss and the latter at most bakeries, with 115-year-old Bäckerei Siebert the old-school choice and Friedrichshain’s Sugarclan the shiny third-wave competitor.

But why stop there? In honour of my ancestors saving a modest amount on their utility bills, here are my three favourite fried things to hit the food scene lately:

It feels over-the-top to pile more praise on the Indian-Pakistani duo behind delivery service Tiffin (already one of Exberliner’s anointed Food Winners of 2021; check the upcoming print issue) but damn if their new fast-food pop-up isn’t right on the money. Gully Burger’s marquee product, sold at the brand-new brewpub Bräugier Ostkreuz on weekends only, is a Kerala-style fried chicken sandwich, marinated in buttermilk and Indian spices and served on homemade brioche with masala ketchup and curry leaf mayo. 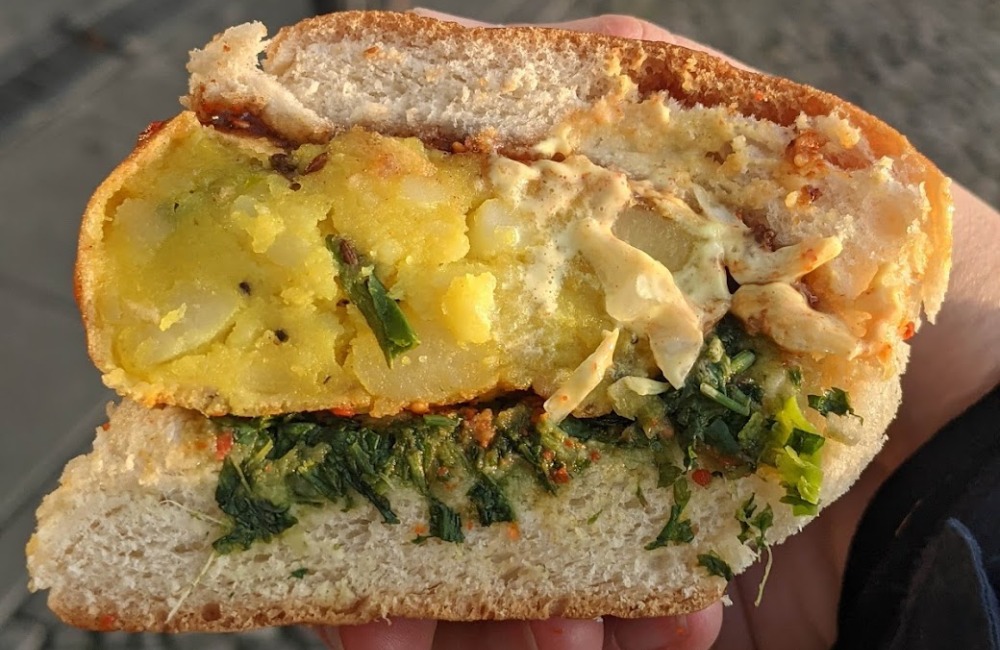 It’s good, but even better is their take on the street food staple vada pav: a spicy, deep-fried potato patty on that same fluffy bun, finished off with a schmear of fantastic date-tamarind chutney and, if you dare, a whole green chilli. Don’t worry, there’ll be plenty of house beer to wash it down with.

Remember the Great Chicken Sandwich Wars of spring lockdown? As our personal champ Barra hung up its fryer basket and returned to the business of winning Bib Gourmands, competing pop-up Birds In The Kitchen took a summer break only to return in better fighting shape than ever. Now sharing a space with brothers in grease Freddy Fey’s Fish ‘n’ Fries, the lads have brought back their Southern-style creation, losing the homemade brioche (it’s Bekarei now, no complaints) but doubling down on the buttery-tangy-spicy sauce. A brand-new tofu version isn’t quite as satisfying – seitan or oyster mushrooms would’ve worked better – but does give vegetarians a hint of what they’ve been missing out on. The best part? You can get it delivered, in a special ventilated box that helps it retain that just-out-the fryer crispiness. Take that, suckers who queued for an hour in April! Oh, wait.

It may be deeply unkosher (if you order it with cheese, as one should) but with its browned surface and lacy edges, isn’t a smash burger patty just a latke in beef form? That’s my line, anyway, and I’m sticking to it in order to include the new-old offering from French fry maestroes Goldies on this list. Introduced as a weekend special at the start of last winters’ lockdown, their burger, “smashed” on the griddle such that it’s forced to fry in its own fat, was such a hit that they’ve now opened a takeout spot dedicated to it in Graefekiez. If you haven’t tried it yet, think McDonald’s – not the actual fast-food behemoth, but your rose-tinted childhood memories of it. Upgraded with locally butchered beef, homemade pickles and squishy potato rolls from cult US brand Martin’s, the wee burgs are worth their €7-10 pricetag (that’s before adding a €3.50 side of fries, which at this location are almost shoestring-thin). For vegetarians/vegans, the plant-based patty tastes meatier than McD’s real one – and your rabbi would approve.