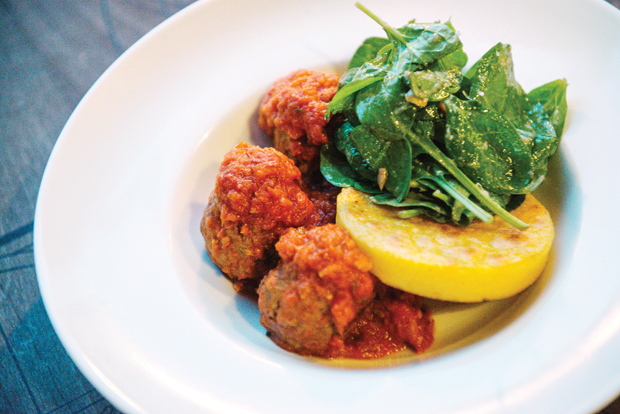 It’s always a bit sad to hear that an old-school Croatian grill had to go. In this case, at least, it was the owner’s initiative – and not the fault of some greedy property developer. After 20 years, Herr Peric decided to pack his suitcase for his homeland, leaving behind a gem of a location at the corner of Innstraße and Weigandufer, across from a charming footbridge over the canal on one side, the grassy Wildenbruch park on the other.

It took the sagacity of musician-cum-breakfast-pioneer Patrick Blasa to see the potential behind the bleak facade and snatch up the venue. His much-hyped Californian Breakfast Slam was attracting droves of starving first-worlders, who, undeterred by long waits and rumours of sloppy service, congregated in packs at Neukölln’s Lagari every weekend. Clearly the Cabslam brand was outgrowing its host venue on Pflügerstraße – both in terms of space and potential.

Enter Davey Frankel, a fellow American with some documentary filmmaking under his belt, a family in P’Berg and a knack for baking pecan pie and marinating cucumbers. They teamed up, and five months and a thorough overhaul later – floorboards incorporated into a great new bar, silkscreened patterned tables, the false ceiling removed to reveal the shabby chic of the stucco original – Cabslam is now a fully fledged restaurant serving breakfast every day until 4pm (biscuit sandwiches, eggs any style, pancakes), lunch and dinner.

Homeland nostalgics can indulge in mac and cheese with a choice of bacon or spinach (crisp baby spinach salad to boot, €7.90). Watch out for the Adobo Soy Chicken (€9.90 for a full meal; €4 for the ‘wings’ version) – its pungent soy vinegar sauce is adequately matched by a side of wild rice and bok choy.

We also loved the meatballs (€9.50) with their flawless moist texture and that distinctive fragrance of fresh sage, fennel seeds and cumin. Drenched with delicious marinara tomato sauce over a bed of polenta, topped with well-dressed greens for a sour touch, it was as uncomplicated and perfectly satisfying as homey food should be (veggie version with sautéed mushroom instead of meatballs for €8.50).

They also offer a convincing take on the ubiquitous burger – kudos to the yummy hand-cut fries and tempura veggies as sides and the fresh-ground beef cooked medium on request (topped with bacon, swiss and guac, €8.90). They also serve a Portobello version for the same price. We didn’t care so much for the fish tacos though (lacking a hot kick and real flavour, €11.50) – if you risk it, ask for a side of their habanero salsa.

A major asset of Cabslam reloaded is bartender G. Beaudin: another über-creative Ami (he makes documentaries and teaches film workshops at the Rütli School) who claims he mixed his first Manhattan at age 11 on Virginia Beach. His Neuköllner Mule (cucumber-infused vodka pimped up with a spicy homemade ginger syrup, €8) surpasses most Moscow Mules in both flavour and strength; his “Chicaner” chilli shots (ancho-infused vodka with a squeeze of lemon/lime/orange plus that “secret ingredient”, €2.50) have already been raved about from Treptow to Prenzlauer Berg. Our only qualm: Sorry, guys, but vodka from Belarus – the North Korea of Europe – is a big no-no!

How do locals feel about this latest intrusion of the gentrifying class into deepest Neukölln? Well, for one, when not filled with CBS brunchers on weekends, the back room is still used by old patrons for community gatherings… and Russian funerals.

They might enjoy Davey’s delicious homemade salt pickles – marinated for two to four days in dill, garlic and coriander brine, until infused but still green and crunchy. As kosher NYC-style as they might be, they’re not that different from those mini Gurken pickled by Omas from Poland to Russia. The Cabslam guys’ latest brainwave: a picnic basket to go and unpack on the bridge or canal banks across the street. Nice idea. Surely one the Croats hadn’t thought of.