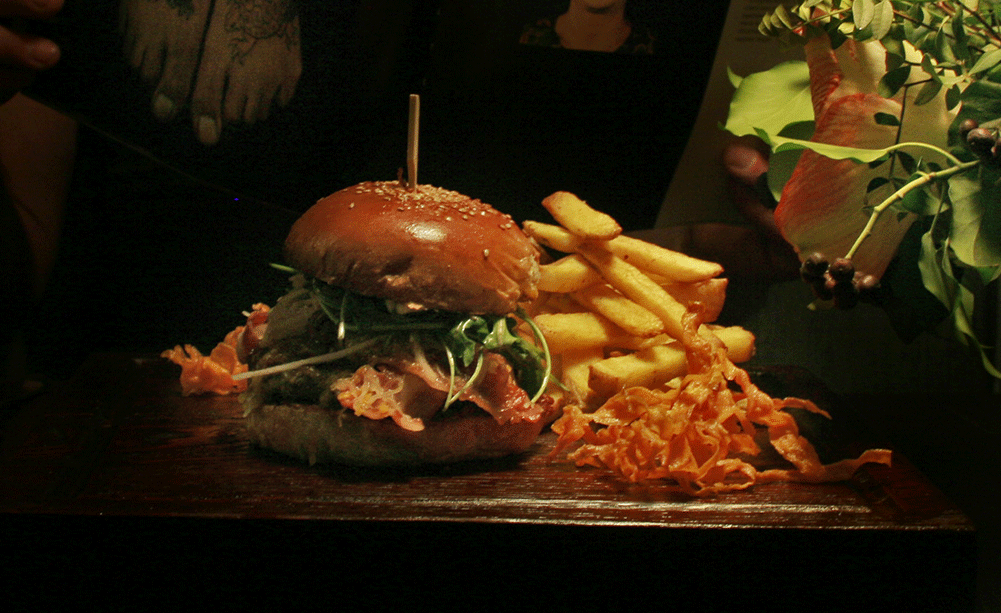 When, last fall, Cabslam’s American owner Davey Frankel finally threw in the culinary towel to pursue his filmmaking passion full-time, Rainer Mennig, the owner of the long-standing Kreuzberg institution Weltrestaurant Markthalle, saw a opportunity – and maybe a back-up plan – for his lovely, spacious German restaurant, itself threatened by rental increases. Within a few months, Mennig has revamped the erstwhile Californian brunch restaurant’s Neukölln location. He seems to have given the interior a paint job, and hung up some paintings and posters – including one for Bowie’s The Man Who Fell to Earth – for a warmer, cleaner, slightly more stylish vibe. The soundtrack has been subtley tweaked, to pleasant 1970s-inspired grooves.

It’s hard to analyse the fireworks in your mouth, but suffice to say it’s pretty hardcore as far as burgers go.

But the evening menu is where things have really been updated and, dare we say, improved with Weltrestaurant taking over. The influence of that restaurant is more subtle than you might think. You won’t find the Kreuzberg restaurant’s famous Wiener Schnitzel here, nor the Schweinebraten with Semmelknödel and sauerkraut. Instead, expect an extremely cosmopolitan menu. Their “Californian” cuisine really means global, with everything from “Freestyle Ramen” (with pork belly or veggies, €8.50) to a US flank steak with grilled veggies and house fries (€21). We took the middle road: the mainstay Cabslam Burger (€15) and the beef goulash (€14), starting with a rather intense “wild plucked salad”, a wintery combo of assorted greens, avocado, grapefruit and fried ‘shrooms tossed in a wild-chives dressing that exudes a tanginess one might credit to the Californian half of Cabslam’s culinary brain. The burger – a generous ground beef patty (it’s organic, though this fact is not flaunted on the menu) on a brioche-like bun from a local Italian bakery – is one hell of a flavour-bomb thanks to a wild mix of toppings: cheddar, bacon, a BBQ “marmalade”, a good dash of ponzu-infused cucumber relish. It’s hard to analyse the fireworks in your mouth, but suffice to say it’s pretty hardcore as far as burgers go. Unfortunately, the delicate bun disintegrates when you hold it between your hands. You’re going to need a knife and fork, or a whole pack of napkins.

The goulash was, in a word, superb: the tenderest beef around, in thick classic brown sauce, nestled in a pile of well-roasted root vegetables and delicious buttery potato-arugula mash. If you haven’t realised by now, Cabslam in its old or new incarnation is not for those with tiny appetites. This is hearty, belly-pleasing food that fills you up. A nice development in this age of proliferating airy “bowls” and tiny, over-priced “tapas” from every continent. Still, we managed a portion of the non-exceptional White Mocha Creme Bruelee (€5), a sweet touch after a celebration of the savoury. And we’ll definitely be back: for their “green” beef tacos or the cod with parsnips, blood orange and Mediterranean “brandade”-infused potatoes.