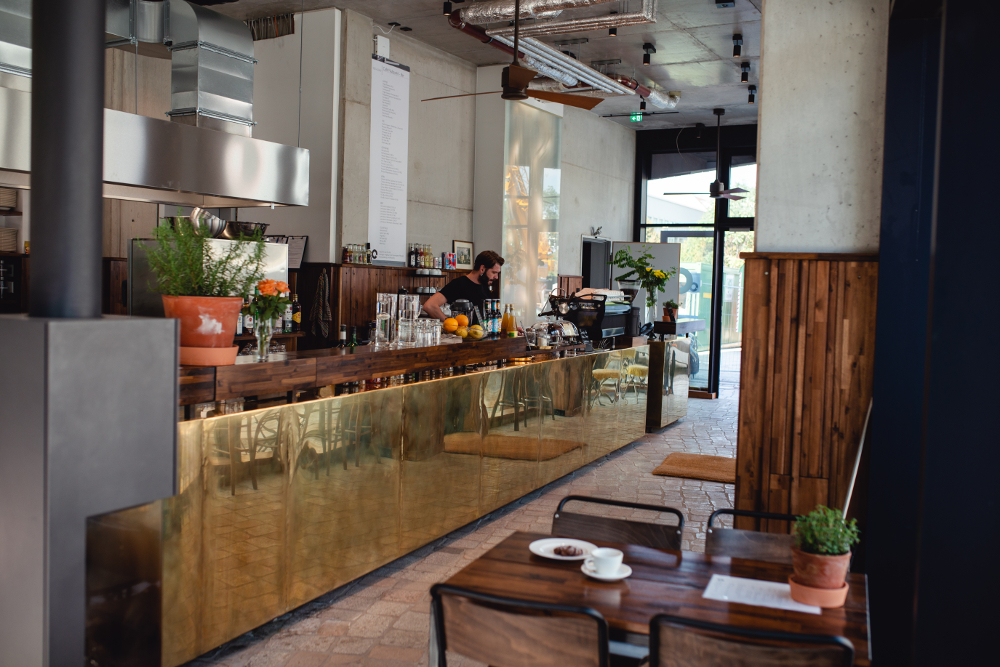 One recent Monday morning in Kreuzberg, a team of builders arrived to put the final touches on Frizz23, a charred blue building at the southern end of Friedrichstraße. After eight years, the mammoth architectural project was finally almost complete – save for the paving stones in front of the café. The brainchild of Wunder-duo architects Matthew Griffin and Britta Jürgens, Frizz23 is one-of-a-kind. A co-ownership initiative home to studios, offices, independent shops and a Miniloft hotel, it‘s among Berlin‘s most innovative ventures, a stunning piece of architecture at the border of culture, commercial space and real estate. The final piece of the puzzle was Nullpunkt, a wholesome vegetarian café which Jürgens and Griffin, launched last year. Until a few months ago, as construction teams tied up loose ends around the complex, everything was running smoothly. (A new children‘s museum was even due to open nearby.) But then the coronavirus happened. “Just as the engine was starting to run, it was taken offline,” Griffin says.

Faced with the imminent closure of their premisses, the small team behind Nullpunkt decided to adapt, and they did it instantly. “We saw it coming. For us it was important to give the signal that we won’t give up, no matter what. So we improvised.” This has meant adjusting opening hours and turning to takeaway, serving hungry lunchers through a tall window. And now dining on the spot is verboten, London chef Caris Jordana, has been forced to look for fresh angles.

“Caris has created new dishes that work really well for takeaway,” Jürgens says. One new highlight is roasted eggplant and penne dish topped off with spicy red pepper (€9.5). There’s also a warm vegetable salad (a customer favourite) with feta, pomegranate, tomatoes and gluten-free bread (€8.5). And Exberliner’s favourite buckwheat pancakes, from now on served as a savoury version with tofu, sweet potato, kimchi and salad (€9.5) — also a gluten-free option, like many dishes here. Naturally, everything is prepped to survive inside a sturdy takeaway box as customers scurry back to self-isolation.

In these tough times, creativity at Nullpunkt has blossomed. “We have the best team in the world,” Jürgens marvels. “They‘re hanging in there and giving their best – even more than usual.”

Jürgens guesses that the final phase of building on Frizz23 might be completed within two weeks. When construction workers load their tools into their truck and depart Frizz23 for the final time, the duo may be too deep in paperwork, working through loan applications and state funding, too really celebrate. Or maybe they’ll be tasting the latest Jordana’s newest culinary creations, yet another ultra-healthy combination of organic veggies and gluten-free carbs. No matter what, Griffin sees the light at the end of the tunnel: “One fine day – my best guess is May — the government will allow us to open again. And life will return.”