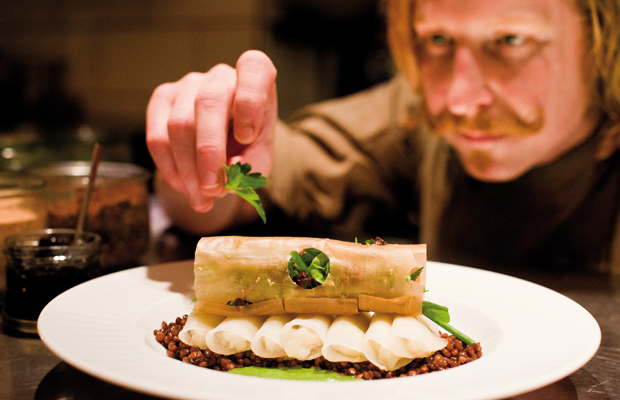 Part of our “Club grub” series: These restaurants blend the underground club vibe with fine dining. Françoise Poilâne set out to get a taste of the Berlin nightlife…

Also see our review of Kreuz Friedrichs and .HBC.

Of all the club restaurants, Cookies is the true pioneer. The fifth location of the famous Mitte club might be listed in guides, but there is no way to suspect its existence walking down this particularly un-trendy block of Friedrichstraße.

To find it, enter the alley between the Komische Oper and the Westin Grand Hotel on Behrenstraße, make your way through the bowels of the four-star hotel, pass the garbage bins and a giant baroque chandelier (an odd feature in a loading bay), then ring the bell at a metal door and enter a darkened room that smells of last night’s booze. Then it’s through a corridor, up some stairs: welcome to Berlin’s temple of nouvelle veggie cuisine.

The painting spelling out “FICKEN”, a relic from the old Cookies, is there to greet you. The space has that Berlin look: concrete walls, rough floor, electric cables laid out in strict modernist patterns on the ceiling. Above white-linen-clad tables hang spotlights with minimalist metal tube shades.

Also remarkable is the way the kitchen opens directly into the dining room, a gemütlich take on the open-kitchen concept that makes guests feel they’re sharing the same space. The feeling is reinforced by the casual look of the friendly kitchen and waitstaff, types you’d rather expect to find in the club downstairs than in an upscale restaurant. Like chef Stephan Hentschel himself, who sports long messy hair and red Prussian whiskers of the handlebar variety, waxed and turned up at the end.

But what rocks the most about Hentschel, who also oversees Cookies’ two Chipps restaurants, is that he can really throw out some elegant veggies, faithfully fulfilling the owner’s mission of showing that high cuisine can be done without dead animals.

Our meal began with a full-flavoured red pepper cream soup with yellow letscho, perfectly complemented by the delicious creaminess of the fresh goat cheese ravioli and a dash of cress (€7). The icy cucumber granité with fancy foam and pumpernickel crumble on top was an eye-pleasing appetite-opener. But the real gem was the Taleggio in puff pastry (€9), a flavour-intense and perfectly balanced act between the aromatic cheese, the spicy-sweet candied mustard fruit and the tongue-teasing blend of peanut oil, brown mustard seeds and cumin that dressed the oriental carrot salad.

On our waiter’s advice, we risked a semi-dry Riesling Plaisir from Württemberg, which, despite its appalling name, turned out to be pleasurably fruity, well rounded and not oversweet.

For once, ‘innovative’ is a buzzword that aptly describes the main courses (€18). Finally, a vegetarian restaurant that doesn’t succumb to Asian fusion and fake meat, or rely on platefuls of pasta to satiate diners. Vegetables are the centrepiece, treated with the fullest respect and served with the greatest creativity – not just as meat-ersatz.

On top of the milk-free, pasta-free, feel-good list was the sophisticated plate of mini taco-shaped kohlrabi pockets on beluga lentils, served beneath a crispy filo-cannelloni filled with wild herbs (which they grow on the roof) and a saucy creamed spinach. This is a serious eye-pleaser, but it felt a bit like a healthy dinner at a Swiss celebrity detox clinic – not a bad thing, but lacking a bit of serious punch for anyone not on Weight Watchers.

More gratifying were the parmesan dumplings with braised artichokes and BBQed tomatoes. The gnocchi-like texture of the dumplings was satisfying, and the tender baby artichokes were delicious.

Finally, a dish inspired by classic French cooking: a potato ‘tourte’ stuffed with salsify root, and served with dainty mushrooms and a remarkably ‘meaty’ jus (a rich, brown brothy sauce), a real feat for a totally vegetarian kitchen, and which has apparently been copied by other high-end restaurants in town.

Here you’ll dine amidst tourists (many over 30 with black-rimmed glasses) out for a unique Berlin experience: a gay couple with their sexagenarian parents from England feasting on starters and crème brûlée only, local bobo-sexuals who appreciate the vibe and the veggies, Herr Cookies himself – an ardent meat-hater – in his usual black hoodie and cap, in the company of Ü30 party people.

At Cookies Cream you can convert to vegetarianism for a night, renounce Fleisch without renouncing good food. Françoise shall come back.