Over the past three or four years the doctrine of craft beer – high hop and alcohol levels, insane prices, guys with voluminous beards – has ever more crept into our lives. While just a few years ago, a 0.5l glass of pils for over €3 would be unheard of in Berlin bars, we’re now more than happy to pay €6 for a pint of brutally hoppy IPA with a silly animal name.

But what to eat with it? A new generation of brewers both local and foreign are building bigger, fancier craft beer brewpubs that – love it or hate it – are taking beer culture to the next level of foodiness. The Americans of Stone Brewing kicked off the trend in September with its “World Bistro and Gardens”, an aeroplane hangar-sized restaurant and bar next to their brewery in an impressive old industrial campus in Mariendorf. Aside from three-dozen-odd beers on tap, the kitchen offers some “fine-casual” gastropub treats such as the ever-trendy duck tacos (€16) and ceviche (€16), as well as regional dishes like wild boar sausage and pan-fried bass from the nearby aquaponic farm ECF Farmsystems.

Don’t feel like making the trek down south? Join the business-casual after-work crowd at Scottish craft brewery Brewdog, which has set up shop on the ground floor of a luxury apartment complex in Mitte. As at Stone, there’s something sterile about the Edison bulb/raw steel/found wood design of the place, and it took us a while to figure out whether to order at the table or the bar. The beer, of course, is pricey but delicious. Brewdog’s brews are less aggro than most of Stone’s “arrogant” products – which, funnily enough, comprise half of the two dozen beers on tap. Food choices are limited to Kettle Chips, pretzels and pizza – pretty damn good pizza, mind you, with a perfectly chewy crust and delectable homemade tomato sauce. The “Spicy Meaty” (€10) with salami and hot peppers was immensely satisfying.

Food-beer pairing is what the brand new BRLO Brewhouse is all about. Enter the mysterious stack of containers behind Gleisdreieck U-Bahn station, and you might feel like you’re in the Borg Cube: lots of black metal! It’s designer, it’s hip, it’s sleek – and is surprisingly ambitious on the food front. Of course there is craft beer aplenty, including the Berlin-founded brewery’s own varieties, which are made in those shiny steel tanks behind the bar. First-timers should order the €8.50 tasting board, not a bad deal by craft beer standards. You get five 0.15L glasses with BRLO’s signature brews: a very sour Berliner Weisse, a tangy Helles, a pale ale, a porter and a mild IPA with German hops. 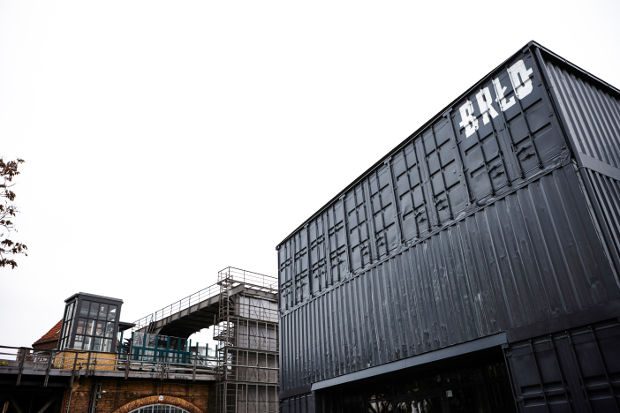 The somewhat bewildering “sharing is caring” menu can be summed up as Central European tapas intended to be eaten communally by small groups, with a strong focus on expertly cooked, yet down-to-earth veggies like whole cauliflower with a pale ale glaze and a coating of nut-butter crumbs (€14, including two sides). You can add one of four meats, like tender free-range pork ribs (€6.50/250g), or more radically, some fatty, crunchy chunks of dry-aged pork belly (€7/150g). Both are delicious, despite being plonked on a plate with no sides. You’re encouraged to pair certain beers with certain dishes, but regardless of what you choose, it’s all pretty tantalising. Just be prepared to splurge at least €30 per person for a filling dinner with beers – or wines, for hop haters.