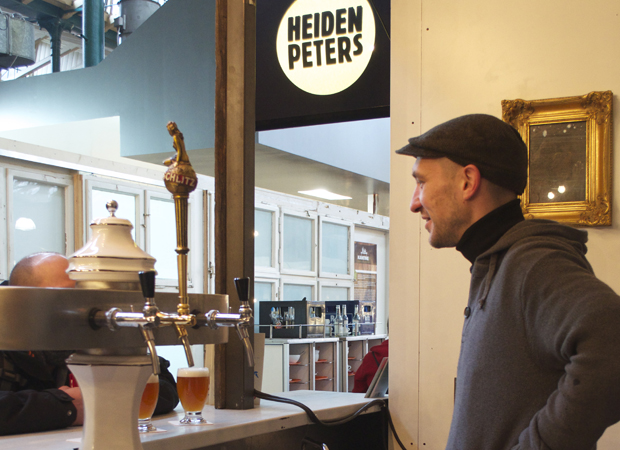 From now through Sep 14, Berliner Braufest is happening at RAW Tempel. In this edition of our celebration of Craft Beer Week, Rachel Glassberg documents the brief history, and creative genius, of two Kreuzberg brewing mavericks.

Former artist Johannes Heidenpeter started homebrewing in his kitchen three years ago, guided only by books and the internet. After participating in an exhibition at Markthalle IX’s opening, he spoke with the owners about launching his own brewery, Heidenpeter’s, in the hall’s cellar; late last year, those plans came to fruition. True to the Markthalle’s forward-thinking international bent, there’s no pils on tap at his stall. Rather, Heidenpeter’s interests include Belgian-style saisons and whisky barrel aging. Which, yes, happen to fall in line with current American trends. “I’m influenced by the American scene in a way,” he says. “The problem with the German beer industry is that they always refer to their history. We need to look sideways, not backward.”

Beer to try: Taps change all the time, so check out Heidenpeter’s creation du jour, even if it’s something like mint-flavoured oatmeal stout.

On the other side of Kreuzberg, Andreas Bogk has based his entire business, Bogk Privatbrauerei, on German beer history. A mere century ago, Berliner Weiße was the most popular drink here, boasting some 700 manufacturers. Now it’s all but extinct, with Kindl’s version lacking Brettanomyces, a funky yeast treated as a contaminant by industrial brewers but necessary for that real Weiße flavour. And so Bogk, who began homebrewing after an IT conference in Belgium three years ago, purchased a 1989 bottle of East German Schultheiß on Ebay. “My friend has access to a biolab. We opened the bottle, poured the sediment onto some agar and waited for the yeast to grow…” In the meantime, word of Bogk’s project spread among fellow hackers and beer connoisseurs. After raising over €20,000 on the crowdfunding platform Inkubato, he transitioned from a kitchen hobbyist to a legitimate brewer, if an extremely small-scale one: his beers are currently available only through special request.

Beer to try: Though Bogk does brew other styles, the Weiße – pale, cloudy and refreshingly sour – could well be his best.