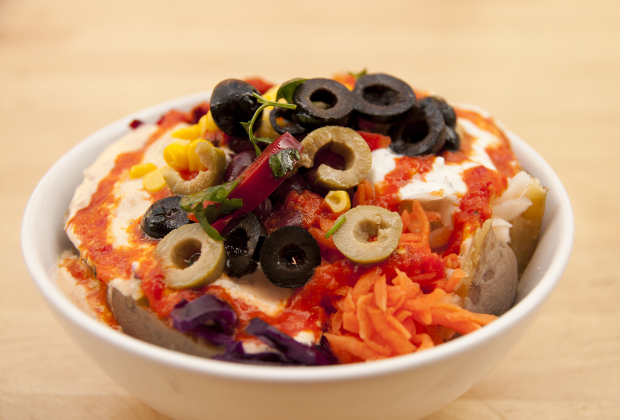 Buttery, cheesy and brimming with sauces and salads, these ubiquitous jacket potatoes are the new Turkish streetfood staple.

The word “Kumpir” is thought to have originated from the German Krummbeere (potato in Palatinate dialect), and brought to the Balkans by Swabian settlers. Having morphed into an overstuffed, oven-baked spud in Turkey, it’s made its way back into Germany. Here are five of the hottest potatoes in Berlin.

The large, crowded Kottbusser Damm staple (very Turkish, despite the French name) serves everything from traditional scrambled egg and vegetable platters to the perfect simit, but it’s the kumpir that draw in the customers. €4.20 gets you a potato with your choice of 16 different toppings, ranging from corn to pasta salad… though the lack of fresh veg leaves something to be desired. CS

Tucked in the bustling tunnel between the U8 and the U2 under Alexanderplatz, new sit-down snack bar Mishba is already a favourite among cash-strapped expats. Like a market crier, the energetic Turkish cashier lures rushed commuters to try the ultra-cheap kumpir and burritos (€1.90 plus €.30-50 per topping a la carte; €2.30- €3 premade). While they’re both smallish, the price and convenience can’t be beaten. We suggest cross-pollination: rather than the expected tabouleh and sour cream on your kumpir, pile on black beans, guac, jalapeños and chilli sauce. JS

Owned by a turkish couple, this garish mini-chain has been selling roasted nuts, dried fruit and kumpir for 10 years. In ode to the name (literally: “sandal nuts”) a pair of antique leather sandals hangs on the back wall. The kumpir (€3.90) are bursting with your choice of toppings, including saffron couscous and seven salads (five of them mayo-heavy). Wash it down with endless cups of Turkish tea. AA

This airy Wrangelkiez café is very much a one-man operation, with friendly owner Ali Birsin (who named the place after himself when he opened it three years ago) perpetually behind the deli counter. His kumpirs (€3.50, photo) are nicely charred, generously topped with pickled and fresh veg and more sauces than you can count, and served in deep white bowls for a classy touch. They’re a meal and a half by themselves – but if you’re absolutely starving, drop another €1.50 to trick out your tater with grilled chicken, Köfte or Halloumi. RG

For the past year and a half this small Imbiss on Prenzlauer Allee has been offering all the starch you might be craving, from potato to pizza. Choose from a range of combos (€3.50-€5) or create your own (€2.20 plus €0.20-€0.80 per topping): despite a somewhat generic display that includes all the usual suspects (sweet corn, creamy sauces, jalapeno, tabouleh), the homemade salads (spicy aubergine, minty courgette, lemony/creamy tuna) stand out. Stuff your face in the tiny outdoor sitting area, complete with artificial lawn and Strandkorb, while watching bikes and cars race down the drab avenue. Prenzlauer Berg gentrified? Not in the slightest! FP