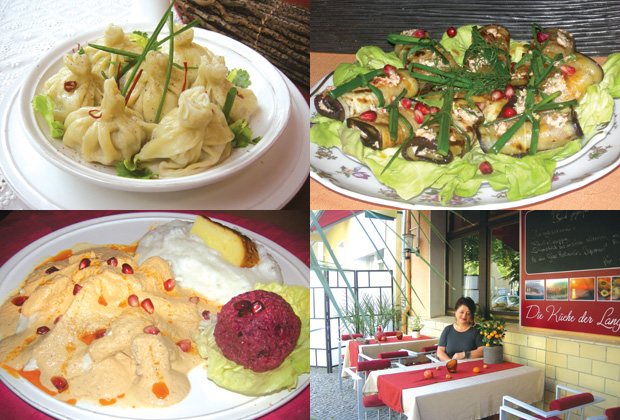 Dr. Violetta Rudat has a life mission. Since January, the former Humboldt University lecturer has been passionately educating the world about the culinary delights of her homeland, Abkhazia, in her little restaurant in a Charlottenburg, Bei Violetta.

Where on earth is Abkhazia, you might ask? It’s a miniscule breakaway region of Georgia with a population of 215,000 and its own language – a subtropical paradise wedged between the Caucasian mountains and the Black Sea. And the battlefield of the recent Russian-Georgian war.

It is only recognized as an independent country by a handful of states, including Russia, Nicaragua and Venezuela – so it doesn’t get to compete in Eurovision.

Violetta, who moved to Berlin a quarter century ago, is an ardent ambassador for her homeland. It began with the publication in 2006 of her cookbook of Abkhazian recipes, 100 Secrets of the Long Living. Abkhazians have been thought to live extraordinarily lengthy lives, and apparently the food has something to do with it.

Her new eatery, on a side street off of the end of Ku’damm, is a comfy, modest place, alive with the boundless energy and warmth of Violetta and her two amicable grown sons – and some bouncy Abkhazian pop music.

When it comes to its cuisine, Abkhazia doesn’t seem to have broken away from Georgia. Which is not a bad thing, since the refinement of Georgian cooking was always heralded across the USSR as the empire’s best.

In true Georgian fashion, one of Violetta’s staple foods is walnut. Minced and crushed with garlic, saffron and herbs and a drop of vinegar (not a dollop of oil or cream – entirely vegan, people!), the walnuts are turned into a most delicious creamy paste used in many meat and fish dishes, from salmon and trout to lamb and poultry.

With this came a piquant fennel soup laden with spice and herbs (€5.90) – reminiscent of a Thai coconut curry, only tastier.

We eagerly wolfed down these starters with a couple of Abkhazia’s famous ‘bread boats’ (€6.90), hot steaming dough vessels each containing an intensely satisfying mixture of mozzarella, goat and fresh cheeses – both dough and cheese literally melted in the mouth.

What followed was no let-down: a plate of voluptuous Achinkál dumplings (€10.90), hand-shaped little purses filled with first-rate home-ground Irish lamb and fresh coriander – a far cry from the unidentifiable processed meat usually found inside the better known Russian pelmeni.

Another classic is Asaziv (€12.90), tender chunks of boiled chicken covered with a creamier version of the walnut sauce. Violetta serves it with a snow-white (as opposed to yellow) polenta (an Abkhazian daily staple only available at KaDeWe in Berlin!), which when cooked in unsalted water, offers the perfect neutral base to take on the flavour of the sauce.

Add to that a side salad of beets, blanched cabbage and walnuts perfectly dressed and spiced. Wash it down with a deep red Georgian Mukuzani… guten Appetit!

Utterly gratified, we shared a house coffee (Violetta’s take on cappuccino, honey-sweet and foamy, perfect as a dessert ersatz) and an improbable but delicious medley of creamy yoghurt, honey, figs, ice cream and peach sorbet (€5.90), the house dessert… at least on the day we visited. Violetta likes to improvise according to the market and her mood. We were instructed to watch for her green walnut jam!

The menu has many fish dishes, homemade pasta and house-style pizza for vegetarians – originally conceived as a kid’s substitute but so popular among guests that Violetta has to bake them more often than she ever dreamt to. She often whips up toppings on the spot: “if not, it gets boring.” When we came: fennel, tomato and pine nuts.

Abkhazian food is generally well spiced but if you like it hotter, ask for Adzhika, a thick, fragrant seasoning made of red pepper, spices, garlic and salt.

As the first Abkhazian restaurant in Berlin, Bei Violetta hasn’t had an easy time drumming up publicity – but the great cooking and warmth of this one-of-a-kind hostess are attracting more and more loyal regulars.

While the political fate of the Abkhazian nation remains in limbo, there’s no disputing its hospitality and culinary wonders. We left with the firm intention to buy one-way tickets to Sukhum, this little paradise of a land’s capital.