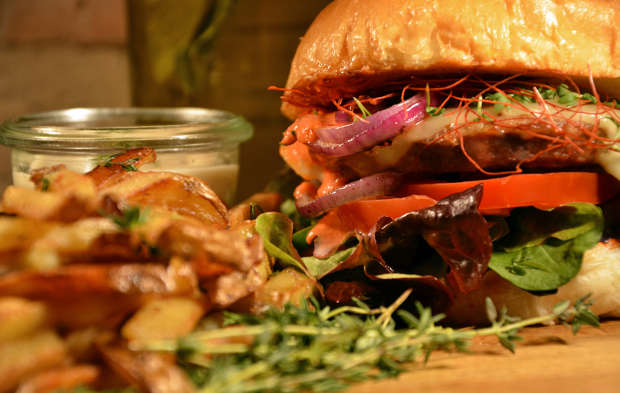 “Stag and boar” sounds a bit like a traditional English country pub. But forget about pints of flat bitter and musty carpets. This Prenzlauer Berg gourmet, game-based fast food joint is decidedly modern with its carefully designed lighting, exposed brick and chilled yet loud beats on the stereo. And it seems to be doing a good job winning over customers with the whole sustainability argument.

What can we say about them? They would be just another gourmet burger joint (homemade buns, crazy toppings…) were it not for the meat, a gamey, pungent version of pork. Despite the name, the main thing here is the Eber or Wildschwein, aka wild boar from the Brandenburg woods. Ethical meat, you might think. After all, one imagines these wild swine happily grunting at each other and snuffling away at roots until the fateful day comes when a hunter with an assignment to cull the boar population ends it all swiftly with a bullet, a far more humane death than the horrific industrialised slaughter cows have to go through.

But a burger’s not just about imagining the life of the animal you’re eating, and when it came to the actual stuff in our bun, it was a bit disappointing considering the price. We tried a Klassik (€7.90) and got a rather average flat, compact pre-griddled patty warmed up on the grill, topped with lollo rosso lettuce (the reddish, crinkly kind), some rocket, pickles , port-marinated onions, cranberry mustard sauce, beetroot sprouts and some Emmenthaler melted on top. It all blends together in your mouth and you don’t really know what’s what, other than there are a bunch of intense flavours whirling around on your tongue. Subtle it is not, but then again this is just fancy street food, right? If overdone sauces and cheese aren’t your thing, grab the simpler Schlicht & Gut (€6.90), more kid-friendly because there’s less weird stuff in it.

The other sandwich we ate, the Pulled Boar (€8.90) was a bit more interesting. A leaner version of the American street meat du jour, it comprised actual chunks of the wild pig , pretty tender and juicy, topped over the top with rocket, tomato, pumpkin, apricot chutney, sprouts, jalapenos slaw and BBQ sauce. A shame, actually… when the meat is good, there’s no need to douse it in freaky flavours.

What they really do well are the Bio-Fritten: seriously delish homemade fries! We recommend the thyme and sea salt variety (€3.50). One portion satisfies two average adults.

To conclude: the idea of happy meat from the forests outside of Berlin is appealing and should do well in this bourgeois-bohemian area. And they get bonus points for serving Cucumis (€3.50), the cucumber soft drink from Hamburg that tastes a bit like a virgin Moscow Mule. But isn’t the €16 bill per head we paid a bit too much for a rather snacky sort of meal? If the popularity of Bun Bao and Fraulein Kimchi’s fusion burgers down the same street are anything to go by, that shouldn’t be a problem for Hirsch and Eber.