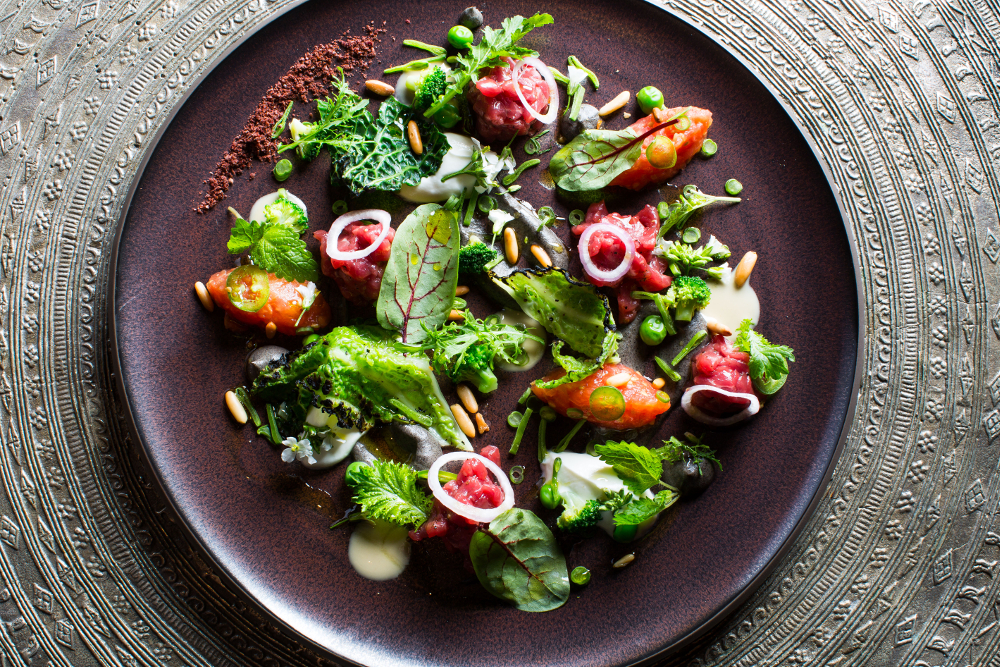 Layla, opened in October across from Tempodrom, is the Israeli chef-preneur Meir Adoni’s first European outpost. Adoni’s famous throughout his home country for his high-end modern-Mediterranean cuisine and TV appearances. With its expansive, polished dining room, lavishly tiled open kitchen and black-uniformed waitstaff, it’s the kind of place you’d expect in – well, Tel Aviv or New York, where Adoni’s other restaurants are.

The menu sticks to his established template: maximalist Levantine fusion that incorporates a global mishmash of techniques and ingredients. You won’t find hummus or falafel, but in a nod to Israel’s Indian population you will find panipuri, airy chickpea-flour spheres filled with buttermilk foam and topped, oddly, with ceviche (€13). Pita bread is eschewed for kubbana (€9), a buttery Yemenite brioche that’s a must-order. Instead of baba ghanoush, there’s an intensely smoky eggplant carpaccio (€17) drizzled with raw tahini, date honey, pistachios, rose petals and feta “snow”. Other dishes go even further afield, like the Lebanese-style ‘pancakes’ (€17), fried empanada-like creations filled with duck, sprinkled with a tart lemon-yoghurt powder and served Vietnamese-style with greens and a chilli dipping sauce. Too much? Probably, but you can’t accuse Adoni of skimping out on flavour. Making more successful use of the same hot-and-sour profile is the Moroccan grilled octopus (€31), in which yuzu and urfa-spiced carrots complement a particularly fleshy tentacle. For dessert there’s a dish called “New Middle East”, an utterly bizarre creation involving sumac meringue, olive crumble, berries and arak sorbet that, against all odds, coheres into something quite tasty. It’s impressive. As is much of Layla’s food, really; there’s a reason why the place is packed nightly with well-dressed bridge-and-tunnel types (plus pharmaceutical execs from the adjoining Crowne Plaza Hotel).

But you do end up wishing Adoni and his crew had acknowledged Berlin just a little – more vegetarian options, more local ingredients, lower prices. As it is, the biggest difference between Layla and his other restaurants is the name of his (excellent) signature dish, an impressionistic veal tartare doctored with aubergine peel puree, goat cheese and fresh vegetables. In New York and Tel Aviv, it’s “Palestinian Tartare”. Here, it’s “Layla Tartare”, for reasons the manager would rather not get into. To which we say: Please. It’s Berlin. We can handle it.