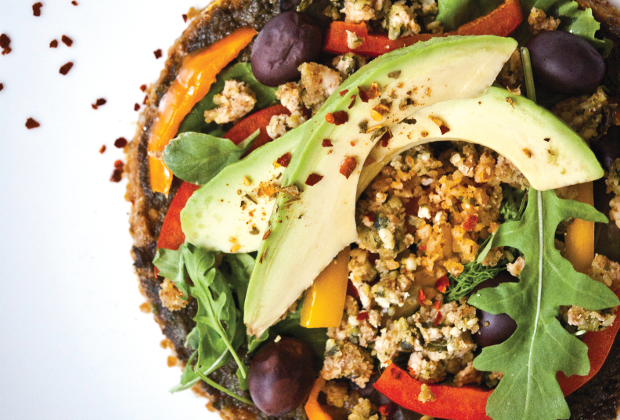 Despite the closing of chi-chi Charlottenburg vegan/raw food emporium Mano Verde last summer (its Facebook page claims there are plans to reopen in a new location) and health-conscious foodies turning toward bone broth and grass-fed butter coffee, the raw-vegan banner flies on at Rawtastic, a casual all-English-speaking Prenzlauer Berg bistro was opened last autumn by Manchester native and Berlin newcomer Simon Francis, himself a vegan for 15 years.

The “cooking” of food – anything over 42 degrees – is 100 percent verboten here. Take, for example, two staples of Francis’ menu: the ‘Shroom Burger (€12) and the Pizzatastic (€14). Both are dehydrated at 42 degrees for a painstaking 16 hours, allegedly preserving the food’s nutritional content and preventing gastrointestinal enzyme destruction.

The ‘Shroom Burger was delicious. The moist, mushroom-based patty had none of the crunchy, grainy qualities of your standard boring veggie burger. Served bun-less (baking is of course a no-no in the raw-vegan universe), it came in a beautiful composition on a bed of lettuce, topped with sprouts on a black slate, with artfully arranged piles of sweet potato “dries” (dried fries), and some pleasing crunchy-chewy dehydrated dandelion stalks, together with two homemade dips: ketchup and vegan mayo.

The Pizzatastic was a bit of a disappointment by comparison, perhaps because it didn’t much resemble everyone’s favourite combination of crispy wheat crust, tomato sauce and mozzarella. The dehydrated gluten-free flaxseed-bell-pepper-zucchini crust tasted a lot like pumpernickel bread. Topped with tomato-basil sauce and cashew-nut “cheese”, covered in copious rocket and hemp seeds, it failed to produce the alchemic bliss one reliably gets from actual pizza.

Then there was the Tex Mex bowl (€12) which, like the ‘pizza’, proved one shouldn’t place too much significance on labels at Rawtastic. This was something between a vegan burrito bowl and an offbeat salad: again, lots of rocket, layered over “spicy walnut meat” (which had a pleasant mouthfeel, but wasn’t particularly spicy), guacamole and vegan mayo, with a crispy slow-baked flaxseed cracker. All this on granular “parsnip rice”, not much like actual rice, but interesting if chewed with a forkful of the other ingredients. The overall effect: satisfying, though not paradigm-shiftingly amazing. Same with our somewhat over-priced starter, the Power-Rolls (€6.90), basically crispy-veggie julienne wrapped Viet-style.

The raw soups, smoothies and cakes were all tempting, but we were full – no stinginess with portion size here. The restaurant also gets kudos for serving tasty local BRLO craft beer. At the end of the day, though, one must ask oneself: how important is it to eat raw? With the dietary trend fading from consciousness, does Rawtastic’s fare stand up not just as health food, but as actual food? All we know is that we’ll be back soon for the ‘Shroom burger and a smoothie.