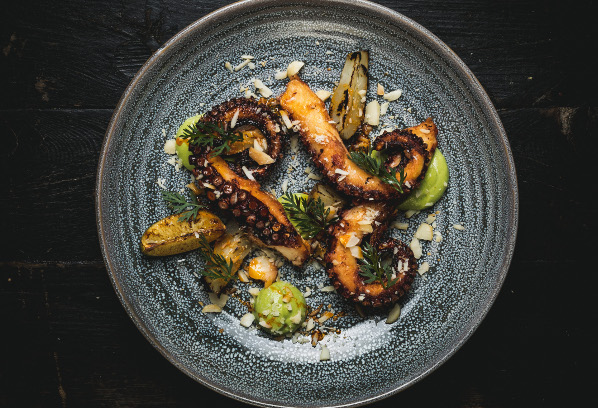 The 2017 Tel Aviv takeover continues, minus the shakshouka. With the help of the guy behind Zenkichi and House of Small Wonder, an offshoot of Israeli modern-Mediterranean restaurant Night Kitchen officially opened in Mitte’s hidden-away Heckmann Höfe on September 8, after about a month of gathering blog buzz. From what we’ve seen and eaten, it’s justified. This is the kind of casually chic, mid-priced late-night dining option Berlin has yet to offer, with a lovely outdoor seating area, solid mixology (try the “Yasso Lassi” with ayran and ouzo, €8) and a creative yet unintimidating menu of “small plates”, many of which could serve as mains. Standouts we tried included the veggie carpaccio starter with tomatoes and smoky eggplant, made addictively crispy with the addition of toasted quinoa (€7) and the perfectly pink grilled hangar steak atop a “raviolo” filled with caramelised onions and Dijon (€18). We can see why the photogenic octopus à la plancha (€18) has driven the bloggers crazy, although we were underwhlemed by the bland green pea mash it came with. Other dishes could’ve used a round or two of editing – like the ‘whitefish’ (vaguely named to allow for seasonal variation; currently North Sea cod), which failed to jibe with its accompanying mushroom puree and celery root risotto. But if the team can iron out the kinks in the menu while keeping the generous portions and fair prices (€32/person is not at all too much to pay for the gut-busting “Dinner with Friends”, which includes nearly everything on the menu), it’ll have legions of Mitte eaters knocking down its door. Night Kitchen | Oranienburger Str. 32, Mitte, daily 17-close