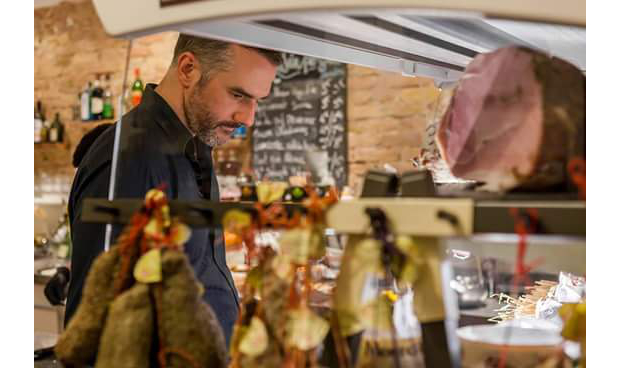 Sébastien Gorius is from Grenoble. A self-taught cook with extensive knowledge of wine and three-years experience running a brasserie in his Alpine hometown, he’s foremost a passionate food lover: he knows the story behind every single cheese and cut of ham on sale in his shop. Lured to Berlin by a friend in 2013 – just before “the foodie wave really took off” – he finally opened Cantine d’Augusta in May 2014.

It’s a slice of France in Schöneberg: rustic décor and warm atmosphere, under the watchful eye of Sébastien’s late Oma. A wine bar and grocery store in one, it offers cold cuts from Basque or Alpine villages and some of the best French cheeses in town, either to go or by the plate with butter, a French baguette and real cornichons (the signature Augusta plate provides three cheeses and three kinds of meat for €14) over one of Sebastian’s 100 wines. With its many raw-milk cheeses, raw butter and cured raw hams, it’s also a temple for raw food and animal lovers – not the way vegans would mean, though! Don’t miss out on the gold-medalled Camembert (Moulin de Carel) – an unpasteurized creamy pungent delight that otherwise wouldn’t make it past the EU border.

She was my grandmother. She was from a small village in Savoie, and like all country grannies, she was the one to teach us about good food and the taste of real products from local farms – like Savoie cheeses, of course, but not only. I also remember her bugnes – sweet crisp deep-fried pastries sprinkled with powdered sugar!

What kind of food can we find at La Cantine?

We’re a wine bar where you can eat very good quality terroir food – sourced from small farms all over France, from Savoie to the Basque country, or even Italy. I travelled a lot and discovered those small producers, doing an incredible job at producing the most amazing cheeses, hams or salami. Like our cured ham – it comes from a small village in the Pyrénnées only 5km from the Spanish border, and it’s just great. I also found the best cooked ham ever – rosemary and pepper… from Italy! We fell in love with it. Everyone does! As for our cheeses, I work with one of the world’s best cheesemongers, Bernard Mure Ravaud. He was awarded the prize of “Best Cheese Maker” in France, a real pro. Try our Brillat Savarin with truffles, or his reblochon! Or the Bleu de Termignon, which is blue without the help of penicillin. Bernard also gave me his recipe for our fondue – it’s a secret, don’t even ask! We also serve a traditional bistro-style dish each day (like blanquette or joue de boeuf) and cakes.

Can you recommend a couple of wines to accompany your mixed plates?

It’s hard… I have 100 wines here! Hum… what about a Haute Cotes de Baune 2007 or a Saint Joseph from Julien Cecillon’s vineyard? He’s a shooting star in France right now and his wines are really worth trying out! Otherwise we have a nice rosé from Pays d’oc – light, summery, perfect for a picnic or BBQ!

The best-selling item at your restaurant?

Get one of our picnic baskets – an assortment of cheese or charcuterie, or both, and wine. It includes the basket and a banquet (€11.50-12.50 per person). People come by to grab one for a picnic in Viktoriapark, but also Tempelhof or Gleisdreieck.

A dining tip (other than your own restaurant)…

La Buvette in Prenzlauer Berg – also a wine bar with great cheese plates and wines. They’re only open in the evening, though. I also like to go to Zsa Zsa Burger on Motzstraße. They’ve been been here forever – well before the burger trend – and serve the best burgers in Berlin! For a seriously good dinner, I go to Le Pastis in Willmersdorf for tartare or foie gras.

The food trend you hate the most?

I’m a bit tired of that vegan/organic/intolerance/gluten-free/natural wine trend… it’s not food anymore, it’s lifestyle! I’ve met so many farmers, watched them make their stuff with so much passion – they don’t do bio necessarily, and they don’t boast about it with marketing and PR, but they produce the most ethical food ever. I wish those people could go and spend a day there. I even know a guy who made a special garden for his pigs! Happiest pigs ever – probably happier than you and me. I think what’s important is to know what’s on your plate and where it comes from… instead of that mass-produced vegan food!

The best thing about having a restaurant in Berlin?

You meet a lot of people, and you can share your passion – it’s a job for passionate people.

Well, it is a hard job – you slave away most of the time! That’s why you really need to love it.