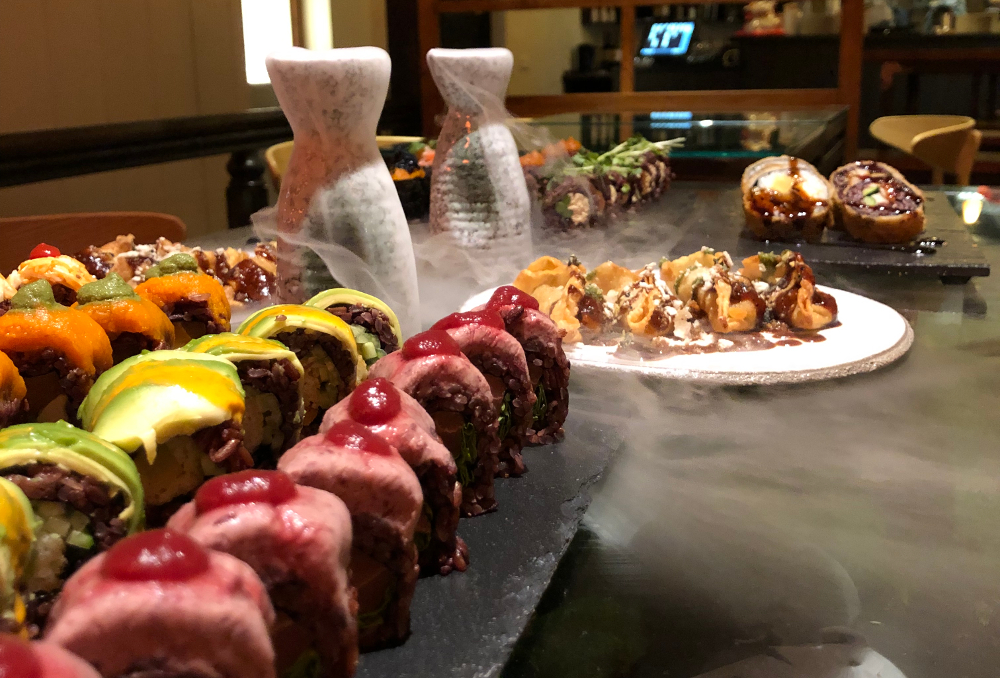 Who the f**k needs fish?” reads the new sign above Friedrichshain’s Veganz supermarket, next to the upstairs restaurant with panoramic windows overlooking Warschauer Brücke. Over the years, this space has morphed to match our city’s vegan zeitgeist. First, it was fancy Italian (Mio Matto), then California clean eating (The Bowl). Now it’s called Secret Garden and specializes in fish-free sushi. Sorry, “sushi”.

It’s not that vegan sushi is a crime in itself. Far from it! Even if we had no ethical qualms about endangered sea critters being shipped thousands of kilometers just to end up drowned in soy sauce and inhaled over some We Worker’s desk, we’d still rather eat rice rolled up with fresh ,in-season veggies than the pallid, freezer-burned salmon and tuna that dominates Berlin sushi counters.

But that’s not what’s happening at Secret Garden. Instead, they’ve opted for a soy-based fish ersatz that looks like sashimi but tastes like unflavoured Jell-O. It adds a gummy texture and little else to rolls like the multiply problematic “Geisha In Love” (the owners also run Vietnamese tapas joint 1990 Vegan Living, so it’s possible they just don’t know what decade it is). Here it abuts beetroot and rocket within the restaurant’s signature “black rice”, actually reddish-brown and so mushy it’s practically pre-chewed. Capped with mashed kidney beans, eggless mayo and raspberry sauce, it’s nearly inedible, made worse if you try to choke it down with the standard soy-wasabi-ginger combo. The same goes for the “Four Seasons” sampler of four cucumber-wrapped pieces, featuring a puzzling mix of cold butternut squash puree and spherifi edalgae “caviar” as well as, we’re not kidding, straight-up canned corn. Forget fish; who the f**k needs this?

Oddly, the non-sushi dishes– chiefly dumplings, summer rolls and various bowls – fare rather well. The dried olive and chilli rice flake topping on the “Little Island” mushroom parcels is a stroke of crispy, umami packed genius that (barely) justifies the tiny portion’s €5 price tag. But fakefi sh is the hard sell at this suburban Benihana of a restaurant, withits pricy-looking Zen rock garden, piped-in mall music and sake carafesfull of dry ice that accompany any order over 12 pieces. After spending €25, we cut our losses and went for proper sushi at Mom’s in Treptow, where the vegan rolls include cucumber, avocado and marinated shiitake. Boring, but miles better than the alternative.