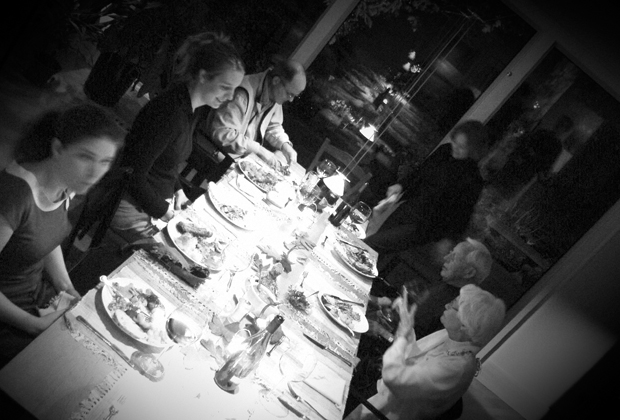 Before my operation, I frequently visited prostitutes. Because I was handsome and mean-spirited, I’d never had trouble finding dates in Berlin. But wading through their identikit art-school drones, sloppy leftist sloganeering and how much they just loved One Hundred Years of Solitude got to be too much. I simply found that paying for sex was cleaner, both physically and spiritually. Mostly spiritually.

But that was then. I’m chubby these days, and the pleasures of consuming and being seen consuming expensive meals has become the substitute for a sex life my medication now renders impossible.

Apparently, I’m not alone. Not if you consider the rise of the Berlin supper club, as trumpeted by the Guardian and Easyjet’s superior, trend-setting in-flight magazine, Traveler. Seems there are lots of folks like me out there: impotent, unlikable and rapidly gaining weight.

Let’s not kid ourselves. The supper club is to the dinner party with friends exactly what the whore is to a date with someone who actually wants to sleep with you. Which doesn’t make supper clubs bad necessarily, only delusional. And like most Berlin women, they’re also un-self-reflectively pretentious.

Their names for starters. See if you can pick out the one I made up. “Travels With My Fork. Pret a Diner. The Sea and the Cake. Thyme. Phoebe in Berlin. The Owling. Loteria. The Shy Chef.” You can’t, can you? Exactly.

Is a supper club right for me?

Well, first you’ll need to ask yourself some questions. Do you have any friends who could invite you to an actual dinner party? No? Good.

Do you have more money than self-respect? You do? Even better.

Most importantly, does donating some of that money and self-respect to attend a fake dinner party with fake friends given by a person who writes this on their supper club’s blog not sound ridiculous to you: “Back in March I went on a Yoga/Pilates/Meditation holiday on Fuerteventura. It was my reminder holiday, a reminder that in January I told myself that 2011 was going to be about balance and inner peace”’ It doesn’t sound ridiculous? No shit?

Then let’s go to it!

Send them an email. Facebook messages are okay too, but do let them know which creative field you work in, or someday will work in, while currently tending bar and selling gluten-free cupcakes at flea markets. Bonus points if you can work the words “Fluxus” or “former DJ” or “macro museum” into the mail.

Usually, they will write back. They might even have a place for you. If so, you’ll be required to make a ‘donation’. That’s right, like a charity, as if there’s also a bunch of bald, terminally ill kids living in their supper club preparing tapas. (There usually isn’t.) Because paying for this is illegal. But illegal is fun, right?

You can eat decadent, expensive, unpronounceable food (just like the bankers!) but also feel transgressive and underground like the desperate trust fund kids at KaterHolzig. Recession-chic for people unaffected by the recession. These supper clubs trade not only in food, like a restaurant, but in self-congratulation. Really, it’s all about as edgy as a fucking circle.

Donation donated or down-paid, they’ll then send you a special, secret email about where the supper club can be found. Usually it’s in someone’s house, which can be disappointing. If not downright creepy. Bring your free-range dog!

This is what happens.

You arrive in someone’s living room. The first thing you do, besides receiving a glass of champagne or wine, is mingle, just as if you were at an actual dinner party thrown by your parents’ friends.

But mingling is boring even if the people are interesting, and these people are never interesting. Most of the people who attended my last supper club were couples, and clearly bored of each other. It was revealing, watching them soldier through their adventurous night out. So you should really just walk around the house looking at and touching stuff. Critically appraising a stranger’s bookshelf is always fun.

The other guests will ask you questions. Just like a real dinner party. But here the answers are optional, because if you’re spending money on this shit, you might as well be able to say however much or little you want to say about absolutely anything you want. (If you want your whore to call you Gerald, well, your whore had better call you Gerald, being the point.) They will often ask you what you do for a living (if they really want to tell you all about what they do for a living).

Everyone will eventually ask you if this is the first time you’ve been to a supper club and where you heard of this one. “‘EasyJet,” is often the best answer. Gee recommends bringing a copy of the Easyjet in-flight magazine, if you can get one. The one that features Berlin supper clubs. Try passing the magazine around the table during the first course, and watch self-congratulation curdle into the realization that their donations aren’t necessarily going towards any sense of exclusivity and have sasquatch-sized carbon footprints all over them. This is good wholesome fun, maybe the most you’ll have all evening.

The food is often good. I’d write about that but who really enjoys reading about food? It’s not like dancing about architecture, but close enough. You can bet your fellow supper clubbers will find the meat so juicy. These clam-like things, wow. The cake so moist. This can go on for a very long time.

The end is the best part: people suddenly adopting the fake joviality of those who know they misspent their money and need to prove to themselves that they didn’t. Wasn’t that fun? It was sad watching them, one by one, march to the kitchen to make their donations.

I waited until last. I complimented the chef on the food, and thanked her for the vegan pork chops.

“What? They weren’t vegan,” the chef said, nervously. “No, seriously,” I said. “They almost tasted like real pork chops.”

“That wasn’t a vegan meal.”

I made a shocked face. I held my stomach; I stepped back, slowly, taking in the kitchen. The animal bones, the carton of milk. Butter. “Oh my god,” I said. “But – but I thought I specified?”

“I’m so sorry,” the chef flustered. Tears actually filling her eyes. “I really had no idea. There must be a misunderstanding.”

“You bet there has been!” I raised my voice.

“And now, what, you want me to donate to this charnel house?”

The chef shook her head no.

So I laughed, told her I was only kidding. I wasn’t a vegan, and of course I’d already made my donation: “To PETA. €40 in their name.’”

Unless you can borrow a police badge, I’ve found this is the best way to not pay for a supper club. Meet the new economy, same as the old economy. It’ll always be about finding the right moron to take advantage of – and what more fertile community of morons than Berlin’s trend-hunters?

At least my whores knew they were whores. And they always got paid.