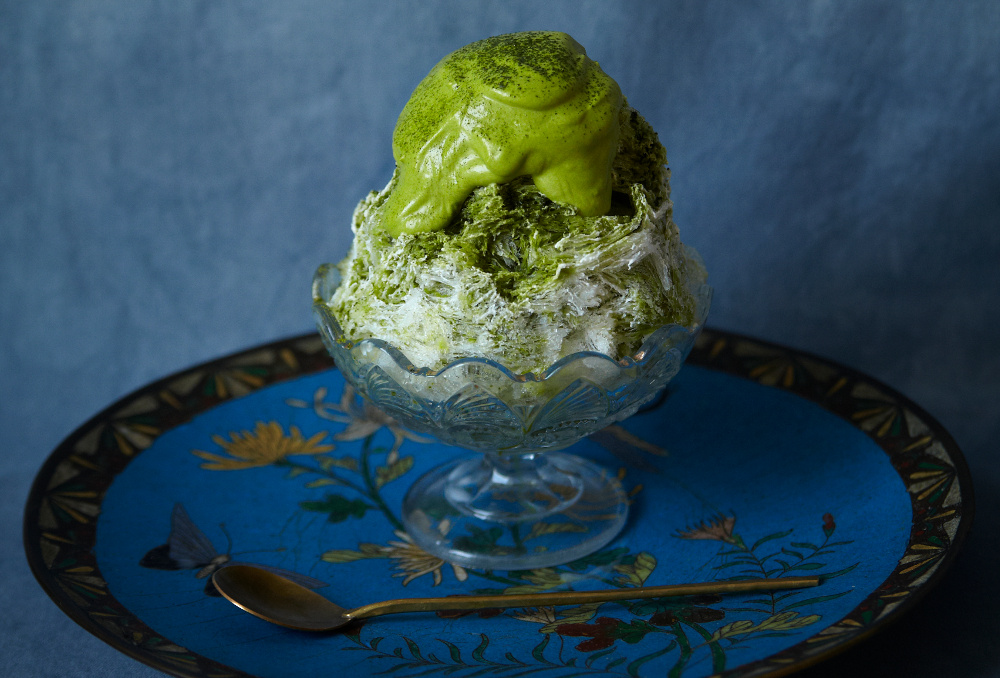 How much are you ready to shell out on something that’s truly unique (in Europe at least), quite delicious (especially if you have a soft spot for Asian sweets), and the perfect healthy, organic and mostly vegan alternative to mainstream frozen desserts?

That was the real-life dilemma we found ourselves in after trying and enjoying a €8 Matcha Kakigori at Tenzan Lab, a small Japanese shaved ice café that opened on a leafy street in the Kollwitzkiez in June. This is the most stunning matcha dessert we’ve ever had in Berlin: a decadent mound of hand-shaved ice layered with condensed cream made out of coconut-soy milk and matcha syrup, with a to-die-for homemade matcha mascarpone cream (or without for the vegan version). They also offer a kick-arse Houjicha Kakigori (the same thing but with low-caffeine roasted tea) and a memorable custard version with Kinako, the roasted whole soy flour used in many Japanese dishes. Even more unique: Sake Kasu (lees – left over from sake making – mixed with heavy whipped cream, €9). The more pedestrian flavours like fresh mango or raspberry (€7 vegan or non vegan) are less intimidating, but also less interesting. It’s all made on the spot before your eyes in the most shabby chic fashion with a shaving ice machine from Japanese manufacturer Swam (yes, that’s a thing). Add quality ingredients that are either shipped directly from Japan and/or organic. And don’t forget the slow-frozen Pi water, turned into crystal-clear ice blocks before being “shaved” by the machines. The cafe is a dark, minimalist cocktail-bar style space, where customers sit around a kitchen island. Everything about the place is tasteful, including the Japanese-American manager Maii Hamada whose hipster-missionary style perfectly epitomises the authentic-chic fusion of the premises.

Of course they serve matcha lattes (€4), and a more original Houjicha version, as well as a disappointing Earl Grey iced tea (€3.50), Barley tea as well as a rather astringent apple cider spritzer (€5). If you’re in an adventurous mood, one might risk the homemade Amazake (€5), a thick fermented rice drink traditionally enjoyed for New Year and so packed with healthy nutrients that it’s supposed to be the perfect hangover cure. But… yuck! “We had to make a choice and decided not to compromise too much on the authenticity, or the quality of ingredients,” explains Maii, in what sounds like an excuse for a drink that has the thick lumpy lukewarm texture of white vomit. “We” stands for the trio of founders – two from Tokyo and one from Bremen, who picked Berlin as the first European city to be graced with a Kakigori café.

This commitment to authenticity and quality comes with a hefty price tag with desserts running €7 to €9 a pop! Of course there’s their loyalty card, but we were disappointed to realise that 10 stamps and some €80 later, we would be only be rewarded with… a free drink! But then again, on the day we came, there was apparently a six-hour wait at one of Tokyo’s most popular cafes, with people queuing under the rain for Kakigori costing up to €16. So hey, who are we to complain about thoroughly Instagrammable €8 bliss! —FP