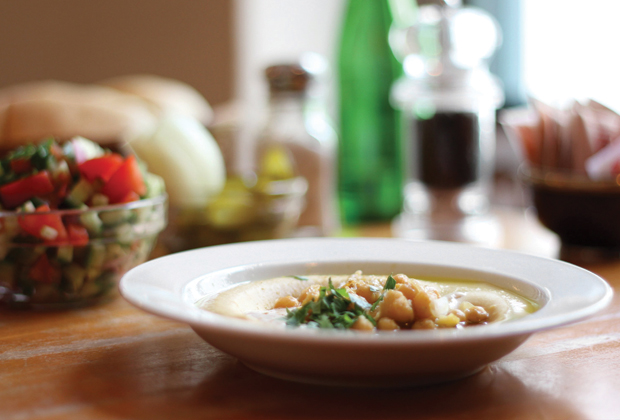 Whether you’re Orthodox and trying to keep kosher, a New Yorker nostalgic for the taste of home or an Israeli DJ out for a bowl of hummus, Berlin’s not short of Jewish eats.

For the truly pious, it doesn’t get any more kosher than Shabbat Dinner at Berlin’s Central Orthodox Synagogue (Joachimstaler Str. 13, Mitte). Held Friday evenings after services and presided over by Rabbi Yitshak Ehrenberg, it’s a four-course affair complete with kosher wine. Dinners are open to anyone curious enough to attend, just call ahead to reserve.

Ehrenberg is basically Berlin’s kosher don, overseeing the lion’s share of kashrut joints here. This includes Kädtler Bakery, an 80-year-old Prenzlauer Berg institution now found at Danziger Str. 135 that sells everything from challah to Roggenbrötchen. That bakery supplies Bleibergs (Nürnberger Str. 45a, Wilmersdorf), a cosy café with a vegetarian menu (including meatless burgers, schnitzel and Bolognese) that caters as much to Westside vegheads as to the devout. For a more third-wave kosher café experience, head to Elfenbein (Kastanienallee 64, Prenzlauer Berg) where you can pair a homemade rugelach with your Brazilian or Arabica espresso.

If your kosher-curious parents are in town, the upscale option is Feinberg’s, an Israeli cafe at Fuggerstr. 37 near Ku’Damm, that uses kosher animal products and preparation but is not under official rabbinical supervision. With its expansive sidewalk terrace and exposed-brick dining room, it’s a good choice for a Saturday shakshuka breakfast before a saunter through KaDeWe around the corner, or, later in the day, a kosher schnitzel or burger. Thanks to German regulations which all-but-prohibit kosher slaughter, it’s all imported and therefore ridiculously expensive – like here and at Milo (Münstersche Str. 6, Wilmersdorf). In the same building as the Chabad Lubawitsch congregation, this fully kosher eatery serves a ‘Mediterranean’ menu complemented by 170g beef burgers that’ll set you back €15.50-€16.

If you want to try your own hand at kosher cooking, pick up supplies at Charlottenburg grocery Schalom (Sybelstr. 10). With a multitude of matzohs, gefilte fish, a freezer case full of kosher meat and kosher wines, including Kedem, it’s a good go-to for anyone trying to hold a Berlinbased seder. Bonus: they stock kosher Haribo.

One can’t throw a jar of tahini in Berlin these days without hitting a newly opened Israeli restaurant, but you still can’t go wrong with the classic hummus trifecta: simple Sababa (Kastanienallee 50, Mitte), cosy ZULA (Husemannstr. 10, Prenzlauer Berg) and fancier Djimalaya (Invalidenstr. 159, Mitte) which all specialise in chickpea spread with a variety of toppings (tomatoes, fava beans, onions, chicken, mushrooms, goulash… the list goes on). Zula, the largest of the three, with a nice terrace on a pretty side street, serves shakshuka and mujadra, a Jerusalem specialty that combines lentils, rice, and onions, in addition to customisable hummus plates. Djimalaya offers all those dishes plus kebab, falafel and an Israeli wine list. Not too far away, sunny, minimal Shiloh (Torstr. 159, Mitte) offers a kosher triumvirate of vegetarian and vegan hummus plates, shakshuka, and mujadra, along with mixed veggie plates, Israeli wine, and a kosher catering service. Be sure to check out the cafe’s back room, with its rotating art exhibits and a library stocked with books in Hebrew, plus back copies of The New Yorker.

New yids on the block include Hummus & Friends (Oranienburger Str. 27, Mitte), a goodlooking spot (think wood accents and big Altbau windows) strategically located next to the New Synagogue. This franchise of a kosher, vegetarian cafe in Jerusalem serves the eponymous dish along with salads and “tapas” like roasted cauliflower and quinoa with zucchini – there’s also a full bar and a kosher wine list. Small and fashionable, Der Kibbuz (Ebertystr. 31, Friedrichshain) is an indie takeaway spot specialising in internationally influenced varieties of the tomato-egg breakfast dish shakshuka (including one with spinach and coconut milk), while café/record store GORDON, the sole Israeli food place in ‘no-go’ Neukölln (Allerstr. 11), skips the hummus plates in favour of flat whites and sandwiches like the eggplant-tahini sabih, served in a pita. 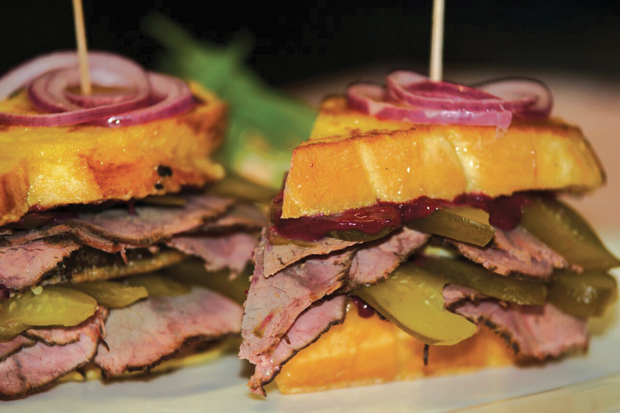 Deli in your belly

When it comes to New York deli-style eats, one would be remiss not to mention Mogg (formerly Mogg & Melzer), housed in the former Jewish girls’ school on Auguststraße in Mitte. Opened in 2012 by Oskar Melzer and Paul Mogg, this eatery is oft-lauded for bringing New York Ashkenazi-Jewish style pastrami sandwiches to Berlin, and though Melzer has recently split to open his own restaurant in Kreuzberg, you’ll still find house-cured beef, matzoh ball soup and all the other classics here. For more Ashkenazi delights, head to Restaurant Pasternak around the corner from the Rykestraße synagogue (Knaackstr. 22-24, Prenzlauer Berg). This old school, moderately upscale restaurant (wallpaper, candlelight, and waiters in white button- downs and aprons) has a page on its menu dedicated to Jewish specialties, from gefilte fish and latkes to pulkas (stuffed chicken thighs) and kreplach (dumplings, here filled with lamb). A few metres across the street, Pasternak’s sister restaurant, Masel Topf (Rykestr. 2) goes full-on Jew, if not kosher, mixing modern versions of Jewish cuisine from the US, Russia, Germany, and Israel: everything from borscht, blini, and kugel to pork skewers (called “the allure of the forbidden” right on the menu).

But what if you just want a bagel and a schmear? You’ve got to make two trips: first, to Fine Bagels (inside Shakespeare & Sons, Warschauer Str. 74, Friedrichshain), where you’ll pick up one of Laurel Kratochvila’s properly boiled and baked treats – plain or sprinkled with chernushka seeds, dried onions, even za’atar – and some chive- or horseradish-infused cream cheese. Next, for some proper lox, swing down to southern Neukölln, where the improbably located Balmi-Lachsräucherei (Lahnstr. 56-78) cures and smokes its own (kosher!) salmon, along with other fish like mackerel and halibut.

And finally, it’s not Jewish, nor Israeli, nor kosher, and yet some might argue it’s as traditional as apples in honey on Rosh Hashanah: the informal American-Jewish rite of Chinese food on Christmas Day. Da Jia Le, serving excellent Dongbei cuisine from northeastern China in an otherwise frumpy corner of Schöneberg (Goebenstr. 23), is open every day of the year. With a proper wine list and extensive beer selection, including great local Rollberg brews, it’s certainly an appropriate way for anyone, Jewish or not, to celebrate Christmas in Berlin. Ideally one filled with eggplant hotpot, whole braised fish in soy sauce, and Szechuan beef.