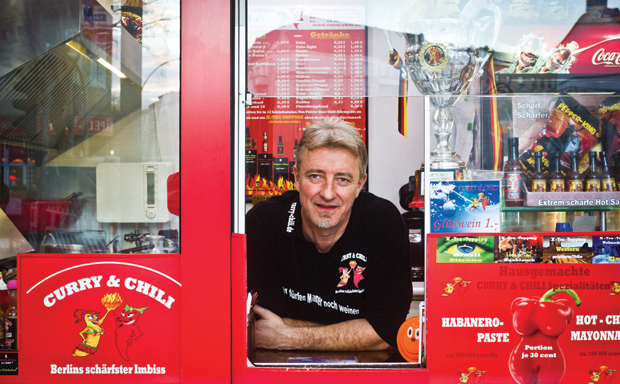 Before today, I believed there was no such thing as genuinely spicy currywurst. Store that in a box labelled ‘dead assumptions’, or ‘reverse peristalsis’. Call it what you like. But I should back up a bit.

As an English male weaned on Indian curry like all children of our island, I love spicy food, and did not understand the ‘curry’ in currywurst. There is no curry there, at least according to my definition. It’s ketchup. Vocalising this confusion led to me being told of a place called Curry & Chili (at the corner of Osloer Straße and Prinzenallee in Wedding), aka “Germany’s spiciest Imbiss”. I did some research online. It seemed they offered currywurst with 10 different hot sauces, and anyone who managed to eat all of them within six months – including the hottest, number 10 – got themselves into the “Curry & Chili Club” and onto the Imbiss’ wall-of-fame. I looked at the faces of the people who had managed it. Some were smiling. Some had tear- stained cheeks. Out of 4000 sausage eaters who had made the attempt since the challenge started four years ago, 11 succeeded. I felt my first queef of fear and decided I needed wise guidance, some kind of Jedi to lead my Padawan mouth through the challenge.

That man was Thomas Hamann, Curry & Chili Club member 180. Thomas is a dentist, Thomas is a basejumper, parachutist, diver, martial arts practitioner and competitive chilli eater. Thomas is a pilot. I am none of these things. I have vomited all over myself and my instructor on a tandem paraglide, and have been a passenger on several commercial airliners. I asked Thomas about the hottest thing he’d ever eaten.

“The number 10 sauce at Curry & Chili,” he said. “It’s 7,777,777 Scoville units.” Scoville is the pungency measurement for chilli peppers and spicy foods. To put this in perspective, Tabasco sauce and jalapeños can be up to 5000 Scovilles, the bastard-hot peppers in Thai food 100,000. To top seven million, Curry & Chili uses pure capsaicin extract, the main ingredient in pepper spray. I asked Thomas how I should approach my assault on number 10. He said this:

“Start with a low Scoville, or sauce number 7 if you’re experienced.”

“Eat mayonnaise-covered fries with the Wurst. It will reduce the pain a little.”

“Mix the chilli topping well with the ketchup. Your stomach will thank you.”

“To reduce mouth woe, drink milk or cocoa while you eat, or raw butter.”

“If you have stomach pains, make yourself sick. It’s disgusting, but you will recover.”

“Does the Imbiss have a toilet?” I asked.

“No, but there’s a public one nearby.”

I watched videos of grown men licking powerful sauces from toothpicks, chewing raw Carolina Reapers and weeping. I ate a fry-up and a mini-pizza then publicly transported myself to the Imbiss. On it is written, “Here, men are allowed to cry.” Owner Frank Spieß has had the place for 10 years. “We started adding hot sauces nine years ago, but it’s only in the last two years that it’s become so extreme.” Waiting for my first Wurst, I spoke to a man ordering number 5 who claimed to have eaten number 10 before. He said many things to me but I understood very little. I think he described to me sausage-beaten humans writhing in agony, screaming “Leave me alone!” I could see it, vividly, and figured this was how it was going to be. I would lose my capacity for language, hallucinate, then die. Then, on a video screen just above me, I saw Thomas Hamann’s face looking down on me, backdropped by the Macedonian flag.

“Pain is only what you accept as pain,” he said. I ordered number 5 (Scream Hot Sauce, 250,000 Scovilles, active ingredient: cayenne pepper), chips with mayo and milk. It was fine. Tree branch shadows caressed a pale apartment block. Low, golden sunlight washed over the tram stop. The City Toilette gleamed a peaceful grey. I wouldn’t need it.

Next I tried number 7 (Curry & Chili’s homemade Silver Cup sauce, 777,777 Scovilles, active ingredient: habanero pepper). It was extremely hot. The heat rose over my face and ears, my nose ran. I finished my milk, ordered another. I looked at the man opposite me and tried to imagine that I was him instead. I lost track of where I was, only brought back into my body by my horribly burning lips. They stayed that way for a while.

I looked at the tiny, knobbled chilli before me and asked Frank, “Would it count if I didn’t chew, and threw this down my throat like a pill?”

I chewed, swallowed. It stung, it grew, but it was manageable.

Frank said, “Sometimes those are okay, but some are super-hot.”

I started on the currywurst and quickly lost my mind.

I don’t care what anyone thinks of me. I’m guzzling milk, mewling, panting like a pup. My skull stretches. My belly is wounded, tying itself in knots; tiny devils knock on the walls. I want to fart but cannot risk it. Frank looks at me from inside the window, concern etched on his face. “This one works on you a bit, right?” I’m shivering from cold or heat – I can’t tell – and am staring rigidly into the distance at the City Toilette. Halfway through I make a run for it. It’s engaged.

I cannot. I lurch across the road to the Eck-Kneipe. I have just enough time to take in the wooden-paneling, the whiskered gentlemen, the green-lit baize of an unfinished game of pool and that the barman looks like Lionel Messi, before I’m on my knees over the bowl in the tiny toilet. Yoda is rubbing my back and Obi-Wan reaches down into the depths of my stomach to pull out the wet, orange-white strands of my challenge. Again and again. It feels amazing. I flush and I am grateful.

Back at the Imbiss I finish my sausage and ask hesitantly for number 10.

Frank says, “No way. Not after vomiting. You need to train your stomach.”

I leave, relieved. Later, I tell Thomas I plan on going back the next day to attempt number 10. He tells me not to.

“Try number 8 a few times, then number 9 again, then a bit of 10. Later you can try a regu- lar portion of 10. You don’t have to hurry,” he assures me. “You have taken your first step into a larger world.”

Want to spice up your life even more? Come to the Second Annual “Horsemeat Optional” Chili Cook-Off on Saturday, May 29, 6pm at Neu West Berlin.